See how the RED stacks up against the Sony EX1

Any camera looks good in a vacuum. Come see how the RED looks against itself and in comparison to a Sony EX3.

Recently I shot some DSC chart footage using a RED with Build 20. The goal was to look for color crossover issues under daylight and tungsten light. The DSC chart that was available had flesh tone patches on it, so I covered them up in order to see the red, green and blue channels more easily on a parade waveform.

Next time I’ll leave them uncovered. I found a very fast and easy way to look at what’s going on with the RED under daylight and tungsten: layer the charts in Final Cut Pro and export a still.

I shot the DSC chart under tungsten light, using zebras to set an exposure for white, and then I added an 80A filter, white balanced for daylight and repeated the process. And since I’d been doing far red filter tests with an EX3, I shot the chart with the EX3 as well and tossed it into the mix.

The results are interesting. I’m not going to bias anyone with my opinions… yet. I’m curious to see what others see. Post your thoughts in comments.

Sony EX3, CineGamma1 (as it most resembled Rec 709 on the monitor and waveform during shooting). Gain levels adjusted overall in Final Cut Pro to match RED footage on ProResHQ timeline. 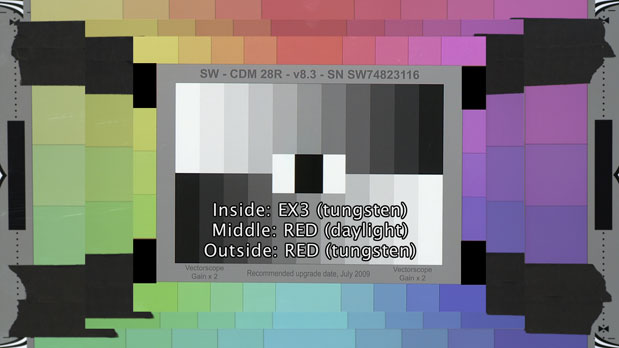