Paul Murphy studied writing in school, but his first job was with a publishing house overseeing the production of promotional videos for new books. He was instantly intrigued so he bought a copy of Adobe Premiere Pro and started creating the videos himself. Eventually he left publishing to focus full time on editing and motion graphics design. Murphy recently completed work on Red Obsession, a documentary about the Bordeaux wine industry and the impact of China’s overwhelming demand. The film recently earned the Australian Academy award (AACTA) for best feature documentary. 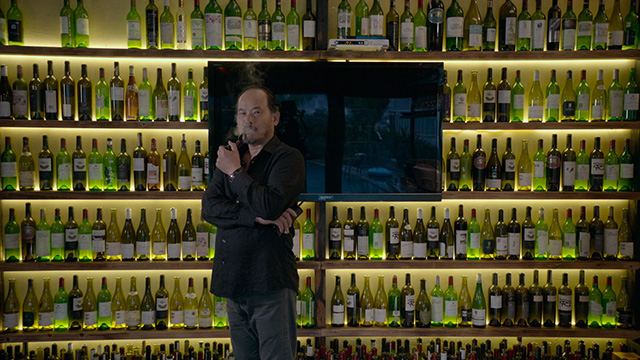 Adobe: Can you tell us a little more about Red Obsession?
Murphy: Warwick Ross, the film’s co-director and co-writer, was approached by an Australian Master of Wine who told him that something interesting was happening related to the supply and demand of wine in Bordeaux. Warwick took a crew to Bordeaux and captured 50 hours of footage that revealed more than just a basic “behind the scenes of the wine industry” story. The wealthy Chinese had decided that they didn’t want to drink traditional Chinese alcohol anymore; they wanted to drink the best Bordeaux wine and were willing to pay for it. Ultimately, Warwick decided to use the wine industry as a microcosm to show what was going on in the global economy. Bordeaux used to sell most of its wine to the U.S. and U.K., but when the economic crisis cut consumption, the Chinese came in and started buying.

Adobe: How did you become involved in the project?
Murphy: Previously, I had worked with Warwick on a short documentary about World War II, and we developed a great relationship. Warwick asked me to work on this new film, and I was eager. We agreed that we didn’t want it to feel like a wine documentary with boring “chocolate box” shots of vineyards and Vivaldi playing in the background. We wanted it to be visually stunning, edgy, and interesting. Ultimately, the film became a story about two very different cultures—French and Chinese—coming together over wine. 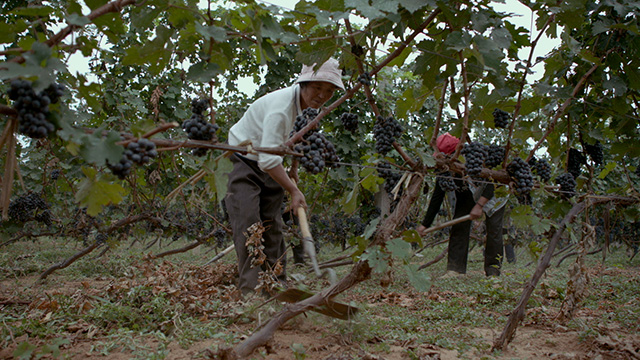 Adobe: What did you do with the first 50 hours of footage?
Murphy: I started going through the footage with the directors and figuring out what was going to work and what wasn’t. Our first task was to create a six-minute trailer with the themes of the story set to music to attract private investors. While we were working on the trailer, the story was still playing out in Bordeaux. The French had pushed up the prices but then the Chinese became fickle about what they wanted to drink and stopped buying. The prices of Bordeaux wines crashed 45% overnight. The crew made three or four more trips to France as well as to China, Shanghai, and Hong Kong and we wound up with 100 hours of footage shot over about a year. At that point, I relied on my roots in writing and storytelling to find the arc of the story and cull everything down.

Adobe: Why did you select Adobe Premiere Pro to edit the project?
Murphy: I have used Premiere Pro since the beginning of my freelance editing and motion graphics career. I’ve dabbled in Avid and Final Cut Pro, but I love the Premiere Pro interface. I know it inside and out, and it allows me to work quickly and confidently. For this project, there was some debate about what software we should use because some people thought Premiere Pro couldn’t be used on a feature-length film. I showed them how I could go into the timeline and locate a frame in the source file. I also demonstrated using Premiere Pro for speech analysis. We had 70 40-minute interviews and we used speech analysis on half of them, which made editing much faster. Red Obsession also has some complex motion graphics, so the integration between After Effects and Premiere Pro really helped to pull it together. It was definitely the right choice for the film. 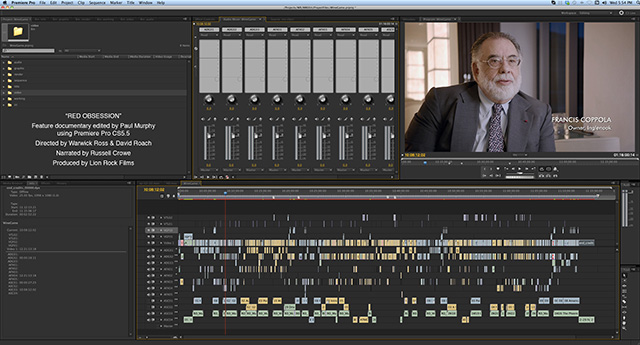 Adobe: Tell us more about the motion graphics in the film.
Murphy: We were editing for about 10 months before we moved on to our motion graphics work in After Effects. In the film, we make visual references to news articles, and fly in and out of scenes. In one instance, we fly out of a scene and at the end the viewer is looking at a 3D image of a label on a wine bottle. The opening title sequence was also created in After Effects, with names of the people working on the film floating in space within a huge, expensive winery. It involved a lot of beautiful track shots, and I was grateful for the 3D Camera Tracker in After Effects.

Adobe: What other Adobe technologies were involved?
Murphy: I used a lot of InDesign for the end title layout, which I imported into After Effects for animation. I also used Illustrator for titling, as well as Photoshop for graphics. I always use Encore to create DVDs or Blu-ray disks for sharing and review. 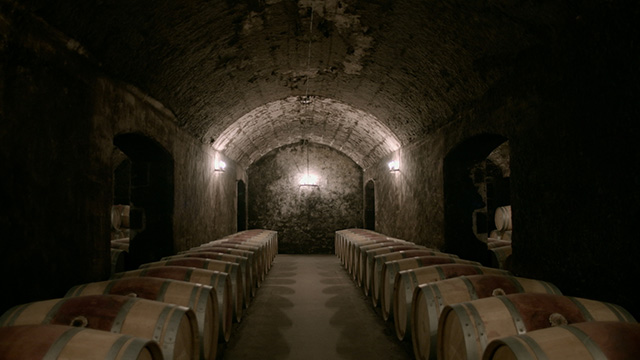 Adobe: What’s happening with the film now?
Murphy: It debuted at the Berlin Film Festival and has also been shown at the Tribeca Film Festival, the Sydney Film Festival, and others. It’s done very well, and is available in theaters in Australia and on video-on-demand and iTunes in the United States.

Adobe: Did you edit this project using Adobe Creative Cloud?
Murphy: This project occurred before Creative Cloud was available, but I will be moving to Creative Cloud soon and I’m looking forward to it. I am anxious to try Prelude CC to manage my footage, metadata, and comments in one place. I had my own database for this, but would welcome the Prelude option. I’m also very excited to try After Effects CC. The fact that you can now bring Cinema 4D files directly into After Effects without rendering is amazing. I’d also like to try SpeedGrade CC for color grading. A good portion of Red Obsession was shot on ARRI Alexa cameras and after editing the footage, I showed rough cuts to the directors in a kind of milky, un-color-corrected state. I would have loved to use SpeedGrade CC to show them something that would look more like the final color. Overall, I’m excited to move to Creative Cloud because I like the idea of getting continuous updates, rather than waiting a year or longer for a new release.

Red Obsession is now available on DVD and VOD in US and Australia.