Red Giant develop and distribute some of the best plug-ins out there.   Shine and Magic Bullet Looks are my “go to” effects from Red Giant.  Way back in March 2014, they announced a new venture, Red Giant Universe.  At the time, Sean Safreed, Red Giant co-founder and CTO said:

“It’s rare we get to introduce technology that is entirely new!  Universe is an entirely new foundation for tools. It marries the simplicity of Javascript with the power of the GPU to deliver speedy renders and pixel-perfect results. Users are going to love how quickly we offer new plugins.”

And add effects they did.  Red Giant Universe has expanded from fifty effects at launch to now over seventy in just a few short years.  Let’s take a look at the newest release, Red Giant Universe 2.2, and see what it has to offer.

Red Giant Universe is in an interesting position in the Red Giant Family.  It’s a place where all the odds and ends go, and I don’t mean that in a negative way at all.  I can probably imagine how things go over a Red Giant.  One day the team is sitting around talking, and someone says “You know what would be really cool, if we had an effect to simulate a VHS tape playing in a machine!”.  So, they get the developers to come up with this effect.  Problem is that that kind of effect, a “one off” effect, doesn’t really fit in with any of the current product lines.  So where does it go?  Universe! Red Giant Universe is the home for all the very cool “brainstorm” effects that the team at Red Giant comes up with, and there have been some really good ones up until this point, like Glitch, Holomatrix 2, Camera Shake, Knoll Light Factory EZ, Heat Wave (one of my personal favorites), ToonIt Studio, HUD Components and Shrink Ray.  Now, I’ve listed eight of seventy six effects and transitions that are currently in RGU.   So, let’s talk about how RGU works, as it’s part of a subscription service that Red Giant has put forward.

Red Giant Universe is available under a subscription model for $20 per month or $99 per year (an academic license will run you $49.50 per year, so 50% off).  I’ll be honest, the VHS effect alone is worth the $99 for the year, so having access to 76 effects and transitions for $99 per year, is pretty sweet!  RGU is supported in the below host applications, and your subscription cost covers use of the effects in all the installed programs on your machine.

I took a look back to what Universe was priced at when it first launched, and the monthly price was $10 and the yearly cost was at the same $99, and to be honest, $99 per year for 70+ effects is a pretty good deal!

This release of RGU gives users access to eleven new transitions , but the two biggest new features are, first, a huge update to the VHS effect including:

And the other HUGE new feature is for Media Composer editors, and that is AVX support for Media Composer.  Now, let’s talk about this for a little bit, because there’s some things going on here that I want to make sure that I’m clear about.  The Media Composer version of Universe has seventy plug-ins.  The ones that didn’t make it in (i.e. – not supported in Media Composer) are : Prism Displacement, Compound Blur, Picture in Picture, ToonIt and ToonIt Transition.  Of the seventy, sixty of them are real-time (green dot) effects, but there is one category that is important for me to point out, and that is the Title category.  These six effects are designed to be used with titles, and work perfectly in After Effects and Premiere,  but unfortunately as of the posting of this article (November 10, 2017), the effects themselves don’t support being applied to titles in Media Composer, as the effect architecture is different in MC, than it is in other NLE’s and compositing applications.  Now, I got a look Universe 2.2 about a week before it’s release, and brought this up as my biggest concern with the Media Composer version, and I was assured that the ability to add these effects to titles (all the effects, not just the ones in the “Title” category) will be in an upcoming release.  In the end, it’s a minor issue that I know Red Giant will fix, and just having the MC effects as an option with your Universe license is a huge set forward in seeing more products from Red Giant supported in Avid Media Composer. 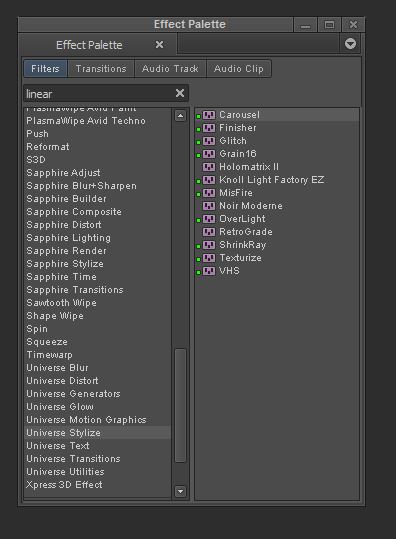 I wanted to add something in here, that wasn’t in the article at it’s initial posting.  I had some time to sit down and think about the titling issue in Media Composer, and though it doesn’t fix it for all the “Text” effects, it does solve the issue for Luster, which is a pretty cool looking effect.  In Media Composer, editors do have the ability to “set into” effects.  This is normally the process when working with effects that have been stacked on top of each other.  Well, it works very similarly with titles.  Once you’ve created a title, simply double click on the effect itself, and you’ll notice it open up in your timeline.  Once it’s opened up, apply Luster to it, and you’ll immediately notice the effect appear in your timeline. 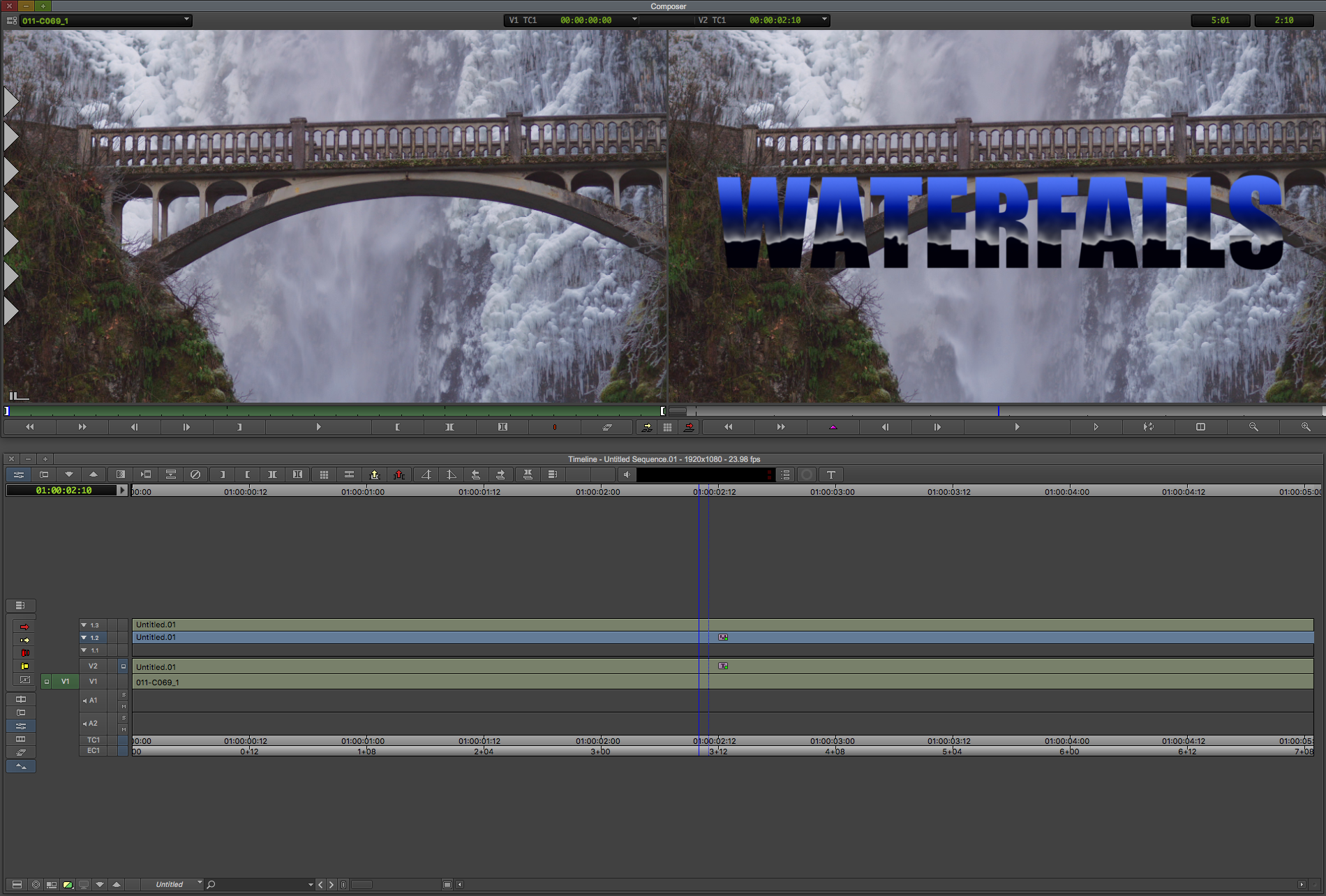 Now that it’s there, you can step into effects mode, and adjust the parameters of the effect to make it look however you want.  One other thing that I didn’t mention in the initial review is that something that you’ll really like in Universe is the Preset Browser.   The one that Red Giant has come up with for Universe is simple and dynamic.  Once you open the Preset Browser (which is not available with every effect, just the ones that really need it like VHS, for example), simply hover over the look that you want, and Universe will preview it for you, normally in less than a second.  Keep in mind that because some of the presets are subtle, and would be noticeable on the big screen, it won’t necessarily be noticeable in the Preset Browser.

I have to say that I’m very impressed with what Red Giant has done, as far as the Media Composer implementation for Universe.  I’m an editor who uses both MC and a ton of After Effects as well, so to have access to both of these tools in my NLE and in AE, gives me the ability to stay in my NLE more than I would normally, as I can add these effects quickly and easily from the MC effects browser!

This is always one thing that I really, REALLY like about Red Giant Software, and that is with almost every new release of software (Universe, Magic Bullet, etc), the team at Red Giant films will put together a movie, using effects from the package that was just released.  They are always very clever, and show off the effects, and what they can do really well!  This Red Giant Film, Hewlogram, is no different!  Starring David Hewlett of Stargate Atlantis Fame, Aharon Rabinowitz and with an extended cameo from Maxon CEO Paul Babb, Hewlogram is the exact reason why you should consider picking up Universe.  The film is a blast, and looks like a TV show from the 80’s, thanks to the great effects in Red Giant Universe 2.2. 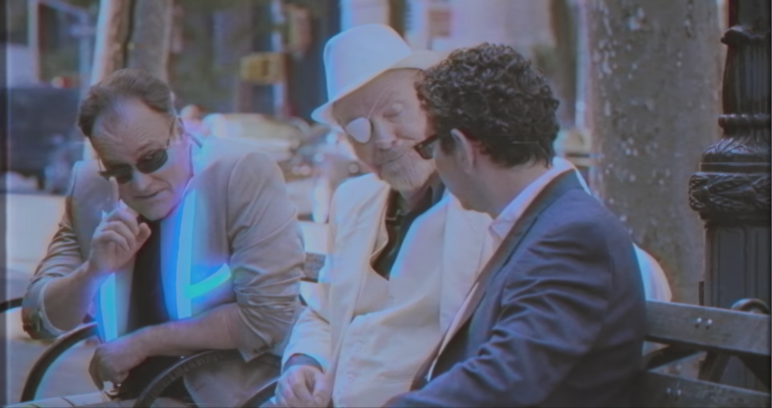 Hewlogram”: A Completely Believable Plot Line for a 1980s Sci-Fi Buddy Cop TV Show.  Known for fun and clever short films that manage to entertain while showing off Red Giant visual effects and motion graphics tools, Red Giant’s newest film is no different from classics like “Old/New” and “Plot Device.” Written and directed by Aharon Rabinowitz, in his directorial debut, “Hewlogram” was born out of both Aharon’s love for holograms and David Hewlett’s love of visual effects tutorials. Hewlett, who is part of the all-star cast of Guillermo Del Toro’s forthcoming film, “The Shape of Water,” discovered Red Giant software through a bit of internet sleuthing.

In the end, if you already have Red Giant Universe, this update is just more of a good thing.  If you’re new to Red Giant Universe, definitely give it a look, as there are some great single effects, like VHS, that you won’t find anywhere else.  The quality of the effect (and all the effects, really) is spectacular, and the diversity of the parameters makes it, and all the other effects in RGU, ones that you can go back to over and over again, and get something different from it each time.  This, plus the fact that these effects are available to you across all the NLE and composting applications you own, just makes it ever more worth while.  For more information, or to download a free trail of Red Giant Universe, you can check it out at the attached link.