In a world where all the statistics on simultaneous tablet/mobile and TV are indicating a massive increase in the behaviour, why are TV broadcasters and 3rd party providers creating 2nd screen services making very poor experiences for audiences? Can content owners and TV broadcasters make the most of this opportunity or have they lost the battle already? Will Twitter, Facebook, GetGlue or other dedicated 3rd party services run the show and begin own the TV communities that spring up at each episode? What are the best approaches to creating 2nd screen but hasn’t all of this been done before? I try to answer a few of these questions and more raised plus highlight some recent and very old interesting examples.

Disclaimer: any views expressed here are mine and do not represent those of any of my employers, past or present

This article is aimed at producers, experience designers, broadcasters and tech companies making or considering jumping into re-emerged interactive TV now known as 2nd screen. It takes the learnings of broader interactive TV from decades old user behaviour in this space combined with the relatively new additional layer of the social alongside TV behaviour. (it also features some late 2010 introduction extracts also from my upcoming social 2nd screen ebook). There is a lot of information below which hopefully some of it made sense even if you are a user only of 2nd screen services, as it does go behind the scenes. 10 key points covering the back-story, how to improve, process and a bit of where next.

95% of viewing is still via broadcast TV (Oztam multiscreen report) – but where is audiences attention? 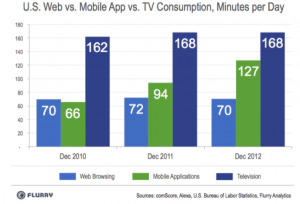 At this rate Mobile will become the 1st Screen this year?!

iTV, ‘eventized programming’ and 2nd screen are as old as the hills, with a heritage going back over 60 years. In fact the oft mentioned Winky Dink and You from 1953 to 1957 actually had kids using a 2nd screen! A piece of plastic they placed over the TV, to draw on, to interact with various ‘impasses’ the characters threw at the kids. Think of the simple equivalent today -an iPad with a cliff hanger still frame from the animation that required kids to draw a solution – “come on there is only 20 seconds left before the wind comes – we need you to draw the windmill! You will be rewarded!”. Then there is this new social thing. Today we have rock solid social ‘network’ applications where audiences talk, shout, pout and scream about the program as it plays out. It is now a global extension of traditional water cooler ‘behaviour’,  not a new phenomenon but now real time and worldwide, shared outside our immediate physical community. For franchised TV this is a blessing and curse – plot spoilers and reveals long before it moves into new territories – but I go off track. 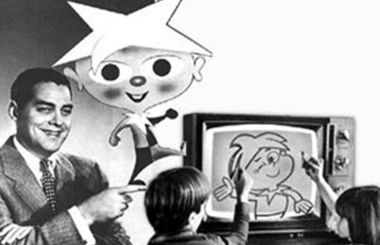 Without doing a full history lesson there are many predecessors to 2nd screen. Good interactive TV has never been about the tech but about the ‘behavioural need’ – bad interactive TV is created by non-creatives and limited by vanilla templates or rely on 3rd party interactions shared across a range of broadcasters. But the audiences desire to interact and play-along with TV –  whether it is single screen red button style (15 years old), synchronised laptop against TV (12 years old) or mobile devices against TV (6 years old at least) have many lessons that have already been learned. So it is odd that many of today’s broadcasters and technology companies are nervously dipping their toes into the waters again, using ground zero methodologies, “it requires a new way of thinking and it is ‘delusional’ to think we know what will work and what won’t” attitude. Wikipedia has a simple para inside its Interactive TV article which refers to the US 2nd screen model from the late 90s.

Notable Two-Screen Solutions have been offered for specific popular programs by many US broadcast TV networks. Today, two-screen interactive TV is called either 2-screen (for short) or “Synchronized TV” and is widely deployed around the US by national broadcasters with the help of technology offerings from certain companies.

Companies like TwoWayTV and Goldpocket had been developing editorial propositions as 2nd screen for years. So I use the word re-booting 2nd screen because there is nothing new about ‘TV that is interactive’. But many content owners think that references to older single screen iTV or laptop against TV shows are some irrelevant relic from the past, ‘that was then this is now’ attitude, when in fact those earlier services had (and still have) engaged audiences often a factor of thousands bigger than the current, mobile + TV model. Some stats from BBC single screen RedButton iTV shows for example here show how pervasive it had been and still is in the UK – even now Red button numbers are at 12 million users a week: 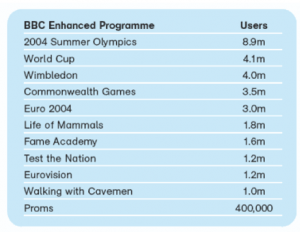 So why are traditional TV producers and service providers who have never done interactive TV before making so many mistakes? Why are broadcasters foolishly developing cul de sac, land grab strategies? What is the better route? Is there any difference between social and 2nd screen TV propositions?

Most of the interactive elements and the multiplatform team/agency that sit alongside a broadcast TV or film production, are an afterthought. It is a sad fact that this is still the case after 20+ years of layering user engagement across TV & Film. Significantly most of these shows/films would not be ‘personally’ watched by the interactive producers, designers or developers – it is just not their ‘thing’. So cutting to the chase, we have a problematic mismatch. Shows and films commissioned as the tent-pole piece, built on research to reach a demographic that are not the actual makers of the ‘experience’ around them – and are often detached and uninterested.

A creative endeavour, especially one with an ‘experiential’ element that does not have passionate creators will come across as dry, in-authentic and technically lead

Often the goal of 2nd screen is to try to draw audiences back to broadcast, but broadcasters are creating new shows that are facsimiles of the past. Safe, formulaic, focused on the TV display and seen as dull to a 2nd screen, socially active audience. This results in a ‘cold’ technical offering, devoid of passion and real understanding of the users and what they are most likely to enjoy being a part of. Then there is the interactive format itself. Often at the lower end of what is technically practical, focused on risk free and the resulting experiences are weak, shallow and of little perceived value to an audience.

For any of this to have real value and for any 2nd screen experience to work for new users, the creators have to be excited about it from an editorial perspective. They need to initially lose the focus only on linear ratings, or raw user numbers and linear first propositions – this will come later. TV broadcasters need to re-model their commissioning and involve experience designers or multiplatform producers at every stage of a new show format – the key is involve early, not bring in after a basic show structure is created but at it’s inception. This is even more critical for synchronised 2nd screen and socially integrated offerings where true two way ‘flow’ has to be built into the dna of the show. Also beware of technically dominant hierarchies in the project teams, where ‘what is comfortably possible’ leads to ‘comfortably numb’ services vs what is meaningful for users.

Over the last 70 years audiences have developed various patterns of behaviour alongside their TV watching. Whether shouting at the screen during 50s Jeopardy, listening to the radio during a sporting game (as it provided more in-depth commentary), guessing what will happen next with those around them or today tweeting or shouting in the room about something that ‘moves’ them during a live broadcast.

There is nothing new about what we do while watching traditional TV, yet there is a lack of new formats that truly exploit these traditional TV behaviours.

So be aware of producers or technologists who say ‘we are at the start of the journey’ when in fact this 2nd screen, active layer has been with us for decades, it just happens that now we have the ability to ‘easily produce’ interfaces and apps that allow audiences to become truly participant users. As usual with any new opportunity like this, it is the ‘technologists’ that jump in first. Eager to grab the low hanging fruit, claiming they are pioneering, technically and editorially. They are closely followed by the content networks, ‘new media’ incumbents creating some of the ‘new and shiny’ for themselves and clutch at strategic straws, trying to justify a range of real time TV interaction. It is hard when for most broadcasters their focus over the past decade has been on web marketing or brochure websites for the tent pole TV shows, and very little else.

They see 2nd screen as ‘must do’ but don’t know why or how yet. But back to the land grab technical agencies where 2nd screen elements for them are not created on user need, but on what is technically possible and try to entice users with – ‘you can do a poll’, ‘you can play a quiz’, ‘hey look lots of info’ – throwing anything against the 2nd screen wall to see what sticks, ignoring the dried up elements that have already been stuck there for a decade. If it does not start with a clear understanding of the behavioural need, you will not sell your experience based on a generic and vacuous interaction.

Read the Rest of the Article