How to make light ray effects even cooler.

Light ray treatments, where streaks of color extend from type, a logo, or image, are popping up everywhere these days. But you've no doubt heard the saying “familiarity breeds contempt” – and we have to admit, many of those treatments are starting to look a bit…familiar. 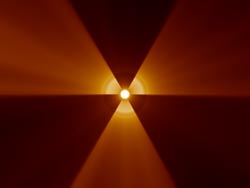 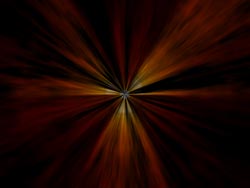 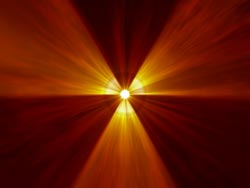 Ordinary light ray effects can often look too solid or static (upper left). To add more life to them, matte them with an animated noise texture (above). This looks particularly nice when composited back on top of the original effect (left). You can click on any of these to see them full size. Light rays created with Trapcode's Shine plug-in; radiation symbol from P22's Atomica font. Click here to download a project file for this technique.

At their stock settings, most light ray effects look too solid or static to our eyes. The excellent Shine light ray plug-in from Trapcode has an animateable Shimmer parameter that adds some animation to its rays, but it seems few are taking advantage of this feature. Even with Shimmer, we've been interested in finding ways to make rays seem more ghostly and animated.

As it so happens, we recently had a client approach us asking if we could make light rays look as if an energy pulse was flowing out from the center. After some experimenting, we hit upon a formula using stock After Effects Professional plug-ins in conjunction with Shine which we think did the trick – see the figures at the top of this page.

We like the basic Shine effect; to enhance it, we wanted to break it up so it seemed more tenuous and flowing. To do this, we decided we needed to create a matte which would eat away some of Shine's rays.

One of our favorite tricks to give an “energy flowing” feel is to take a fractal-generated pattern such as clouds, stretch it by a large amount in one dimension so it extends into a series of wispy lines, and animate it. This is easy to do in After Effects with Stylize > Fractal Noise effect.
To stretch the resulting fractal pattern out into lines, disable the Fractal Noise's Uniform Scaling switch – this activates independent Scale Width and Scale Height sliders. For vertical lines, increase the Scale Height parameter to something obscene like 2000% while leaving Width at 100%. The result of this progression is show below: 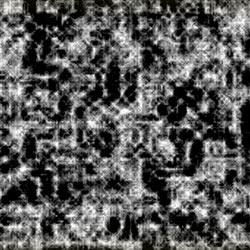 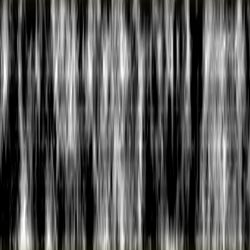 To create a nice “flowing energy” effect, use the Fractal Noise effect (left), animate its Evolution and Offset Turbulence parameters, and scale it by a large amount in one direction to turn it into lines (right).

Fractal Noise has a number of options that can create a variety of noise patterns. For this application, we used a Fractal Type of Threads, Noise Type of Soft Linear, turned on the Invert switch, and set the Overflow popup to Clip. Of course, feel free to experiment to see which combinations looks best for your own task, as each one gives a different density and pattern to the resulting lines. You can then play around with the Contrast and Brightness sliders to get the dark-to-light mix you want in the lines. Remembering that this will later be used as a matte, we made sure we had areas of pure black (to completely knock out some of the light rays) as well as areas of pure white (to let the rays through at full strength).

There are two ways to animate the resulting pattern in Fractal Noise. The Evolution parameter makes individual lines form and disperse. The Offset Turbulence parameter allows you to move the lines. To have our lines flow in a vertical direction, we animated the Y Position for Offset Turbulence. Remember you can “scrub” these values directly in the Effect Controls panel and watch the results in the Comp panel.

At this point, we have some animated “stretchy lines” flowing from the top to the bottom of our comp. However, light ray effects emanate outwards from a center point. To convert our linear lines to radial spokes, we applied the Distort>Polar Coordinates effect, set the Type of Conversion popup to Rect to Polar, and set the Interpolation value to 100%. The result is shown below: What was previously the top of the image is now the center, and what was previously the bottom is now spread around the circular edges. Polar Coordinates works best on square sources; we used a 1000×1000 pixel comp and solid to ensure that the resulting circular noise pattern fully covered a D1-size NTSC comp edge to edge. 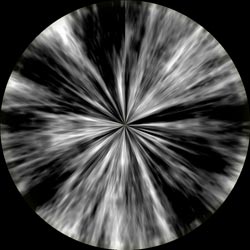 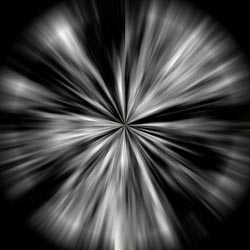 To make the lines seen on the previous page radiate from the center, apply Distort > Polar Coordinates, with a Conversion Type of Rect to Polar (left). To smooth it out and add grain, apply Blur & Sharpen > Radial Blur set to Zoom with Antialiasing set to Low (right).

The resulting polar noise pattern looks a bit like the details in the iris of an eye. If you don't like this much detail, you can experiment with reducing the Complexity parameter in the Fractal Noise effect. An alternate solution we like is applying Blur & Sharpen > Radial Blur with its Type set to Zoom (seen above). This smoothes out the detail in the lines, and if you leave the Antialiasing set to Low, adds a nice graininess to the edges of the effect.

To make the noise pattern appear to grow out from the center, we used a mask to wipe it on. A potentially confusing point is that After Effects calculates Masks before Effects – so although it may look like you should create a circular mask that grows in size to wipe on the rays, this circular shape would be further processed by the Polar Coordinates effect, resulting in something quite different than intended. The solution was to temporarily turn off Polar Coordinates, and animate a mask that wiped on from top (the center point after Polar Coordinates is turned back on) to the bottom. We added some further refinements such as animating the feather of the mask to make the leading edge seem to flow out, and animated the Opacity of the layer to fade it down after the energy pulse reached the outside edges of the circle. This progression is show below:

By animating a mask for the flowing noise matte and Opacity for the underlying light ray, you can get an “energy pulse” effect.

Polar Coordinates and Radial Blur are two of the slower plug-ins in After Effects; Fractal Noise is no speed-demon either. We dropped the comp's Resolution down to Half while tweaking parameters to save time. Another production trick worth remembering is to render just this comp, setting the Post-Render Action popup in the Output Module to Set Proxy. This will use the resulting movie as stand-in for the comp, making any comp that uses the result much more responsive. If you need to go back and tweak this effect, turn off Proxy by clicking on the black square that appears next to this comp in the Project window, or delete it by selecting this comp in the Project window and using the menu command File > Set Proxy > None.

The hard work is done. To use this flowing energy effect in your own project, set up your light ray effect as normal in its own composition, and nest the flowing energy comp on top of it. Then set the Track Matte popup for the light ray layer to Luma Matte. The light ray will now be cut out by your flowing energy pattern.

While working with the client, we decided the effect looked best when this “energy pulse” was composited on top of a normal light ray. To do this, we duplicated the light ray layer. The Track Matte popup for the layer on the bottom was set back to None. We then set the Blending Mode for the matted rays on top to Add, to get a really “hot” look. Of course, you can try other modes for different looks.

Don't consider the approach outlined here to be the only recipe to create a more animated light ray effect. Our main goal was just to add some motion and mystery to the otherwise-solid rays. An alternate approach we liked was using drifting smoke from one of the Artbeats pyrotechnic collections – as a luma matte for the rays. Other effects that might provide useful light ray mattes include Generate > Radio Waves, Simulation > Caustics, or anything else that creates naturalistic patterns or unnatural “pulses” that can add motion to the rays. Experiment, have fun, and share what you learn with others!