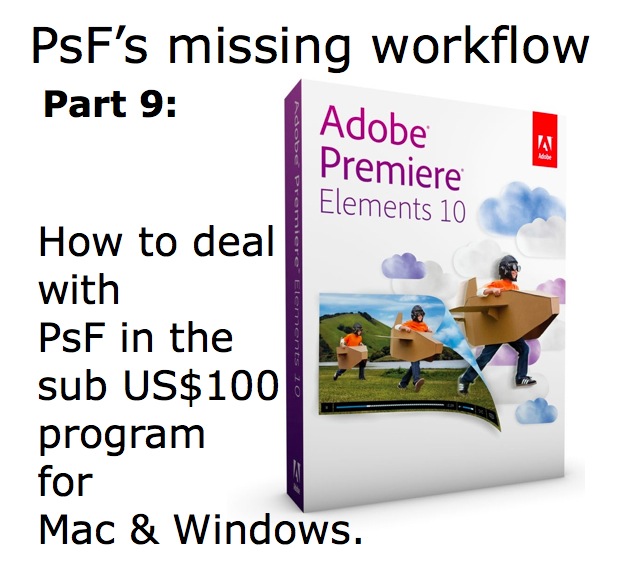 In parts 1-3 of the PsF’s missing workflow series, we introduced the terms benign PsF & malignant PsF, and revealed the PsF status of several AVCHD cameras from 3 manufacturers. In #4, we did the same with several HD recorders. In #5, we revealed how one recorder manufacturer is offering its own software to counteract the inappropriate signals offered over HDMI by many cameras. In #6, I published an open letter to all pro AVCHD manufacturers. In #7, I covered how to deal with PsF on a progressive sequence in Premiere Pro CS5.5. In #8, I showed how ClipWrap is an excellent solution for many Mac editors. Now in #9, I’ll discuss PsF with the sub US$100 Adobe Premiere Elements 10.

Tests made for this article

The observations and tests made for this article were done using the Mac version of Adobe Premiere Elements 10. To my knowledge, all observations would be identical with the Windows version, except when noted.

The terms benign PsF and malignant PsF were introduced in Part 1 of this series called PsF’s missing workflow. If you haven’t read it yet, please do, in order to understand the importance of proper handling of PsF, and be able to preserve the pristine quality of the footage you shoot throughout your workflow. It is a shame to degenerate your video by not having a good command of this important issue.

Can a professional really use Premiere Elements?

The answer is that it depends! I’ll be covering that in a separate article with that same name: Can a professional really use Premiere Elements?

Challenges to dealing with PsF properly in Premiere Elements

On page 2 of this article, you’ll see…

At present, the best workaround to edit native 1080p23.976, benign 1080PsF25, or benign 1080PsF29.97 in Premiere Elements 10 is to use the matching DSLR preset instead of any AVCHD preset. When I say “matching”, I mean the one that matches the framerate of your footage. Fortunately, using the DSLR preset is an indirect way of forcing a preset to progressive, since there are no interlaced options under DSLR. Performance will not be affected by using a DSLR preset for progressive or benign PsF (as defined in the prior articles in the PsF’s missing workflow series). But don’t count on this for malignant PsF for now. See alternatives just ahead. 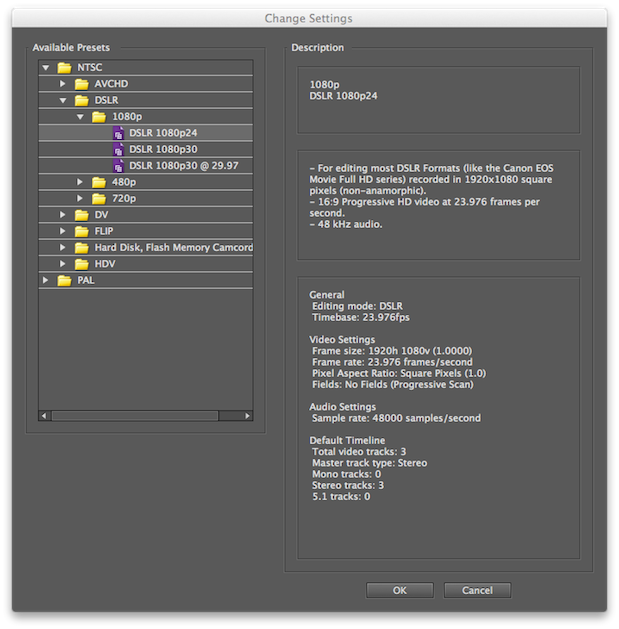 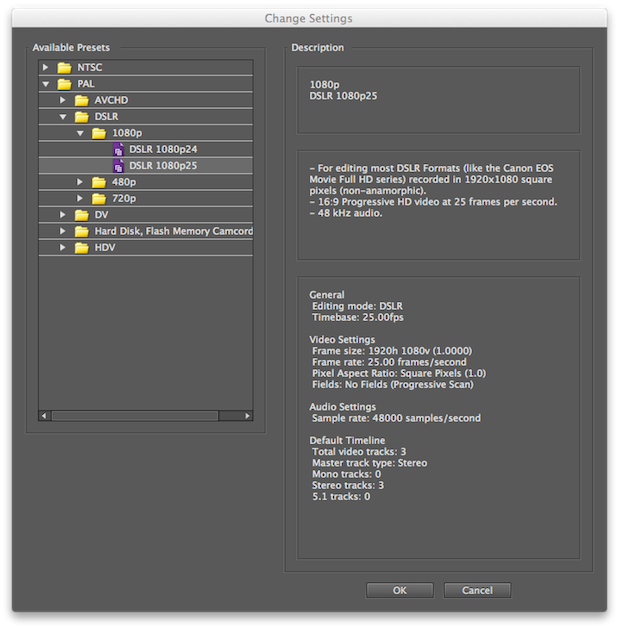 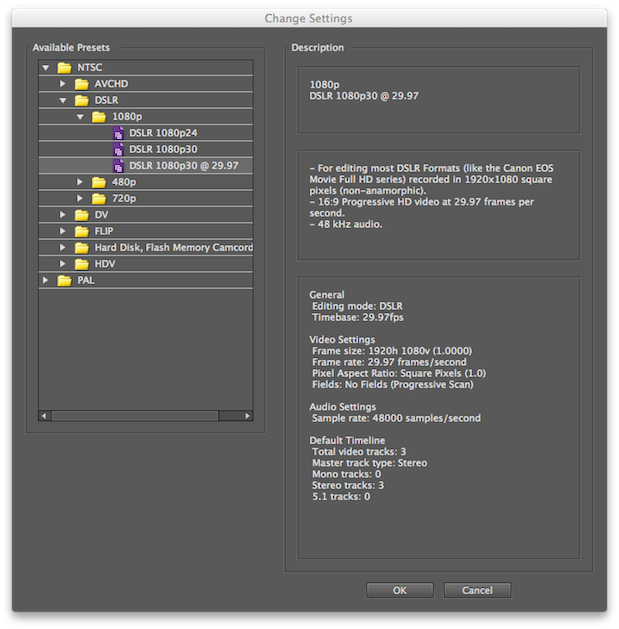 What if I have malignant PsF from a Canon AVCHD camera?

Although Premiere Elements 10 does have a feature called Interpret Footage which is similar to the one in Premiere Pro CS5 and 5.5 (see PsF’s missing workflow, Part 7: Adobe Premiere Pro CS5.5), unfortunately the simplified version of the Interpret Footage in Premiere Elements 10 doesn’t have the option to interpret a particular clip as progressive the way the one in Pro does. Premiere Elements 10 also has a contextual menu called Field Options, but it includes all options except the one that we want. As a result, presently it’s a bad idea to import Canon’s malignant 25PsF or malignant 29.97PsF AVCHD footage directly even into a DSLR preset based timeline in Premiere Elements 10, since currently, the program will see it as interlaced. Until something changes either via a firmware update from Canon or an update in Elements to recognize the Canon PsF AVCHD footage as what it is, the only options I can recommend are (pick one of these):

Best practices for exporting (Sharing) from your progressive 1080p (“DSLR”) project in Premiere Elements 10 for H.264 for web and mobile devices

Even though Premiere Elements offers direct, easy export (and even automatic upload to web video sharing services), don’t use them because you won’t get the control -or the visible verification that you are indeed exporting your progressive timeline without any undesired de-interlacing. In addition, using these options often produces an innapropriate frame rate on the output, without any override capability. Instead, use the Mobile: Apple iPod, iPad and iPhone portion of the Sharing section of Premiere Elements 10, since that’s where you’re able to create your own presets, have very advanced control, and be able to confirm with absolute certainty that your timeline has been indeed detected as progressive, and that the output is also progressive. Be sure to match the output framerate manually for your output based upon your original footage and project setting, since unfortunately there is no “Same as source” option. [In the mentioned section (the Mobile: Apple iPod, iPad and iPhone portion of the Sharing section in Premiere Elements 10) you’ll be able to adjust all of the minutia associated with the ideal H.264 encoding for any particular situation, the details of which are outside the scope of this article. This article is focused upon how to handle PsF -and native 23.976p- in Premiere Elements 10.]

If you want to use Premiere Elements 10’s inboard basic authoring and burning for DVD or Blu-ray, do so at your own risk. This function offers very little manual control of your encode. For DVD, it offers the option of burning directly, or “burning” to a folder to be burned later (either 4.7GB for single-layer DVD or 8.5GB for dual-layer DVD) along with some basic presets, although fortunately there are presets for widescreen DVD. For Blu-ray, the only option is to burn directly to a disk. Both DVD and Blu-ray subsections fortunately offer the option of automatically calculating the bitrate to fit the available space depending upon the type of target. It is not completely clear whether they will properly make the target framerate 23.976p from such a project, but the presets certainly don’t imply it. To underline that, for Windows users only, a hacker has created extra presets to allow that. For best results, I’d go with the second (manual) option, which I cover in the next paragraph.

If you prefer to use another application for burning DVD or Blu-ray disks (with or without authoring), use the Computer: MPEG section of the Share mode, where you’ll get full control of the DVD-compliant MPEG2 or Blu-ray compliant H.264 or MPEG2, at any of the appropriate framerates (23.976p, 25p, or 29.97p). Remember that although the Blu-ray spec fortunately supports native 1080p23.976 (so make it native in that case), the Blu-ray spec sadly does not allow native 1080p25 or native 1080p29.97, so the best option is to create 1080PsF25 or 1080PsF29.97 at this point (upon final encode), which Premiere Elements 10 fortunately offers. That way, whatever software you use to author (if desired) and burn will see the file as Blu-ray compliant and only handle its other tasks.

Upcoming articles in this PsF’s missing workflow series will reveal the different workarounds with other software programs, and my conclusions about this situation. To be sure you don’t miss any articles, sign up for my mailing list here.