This is the second half of a review of the Prometheus second screen app.

The Prometheus second screen app home page is a simple navigation screen that lets you dive into the extra content and synchronize the second screen experience with your Blu-ray viewing experience. It also gives you a standard help screen and the ability to access the Fox store in case you decided it was time to go purchase a collector’s edition of the film or any additional movie paraphernalia. There are a lot of features and a ton of content but I’ll focus on three main areas:

The archive will look familiar to anyone who has gone through the bonus features on a DVD or Blu-ray.

This material is interesting to look at if you’re the kind of person who likes to go through all the bonus features on a Blu-ray. I imagine that person would also prefer to be viewing the material directly off the Blu-ray in HD on a much larger screen. Overall, the archive is kind of interesting but hardly a compelling reason to get into a second screen experience.

The social aspects of movie viewing have always been compelling. After all, how many of us still go to the movie theater just to see a film? Most of us are there as part of a social activity with friends. It shouldn’t be surprising that the Prometheus app has social features built into its architecture. I didn’t see a lot of activity tracked through the app but it had the standard Twitter and Facebook publishing options. The app uses Get Glue, a newer entry into the social media market. They have a narrower niche than Twitter and Facebook, providing a social network for film, television and sports viewers. 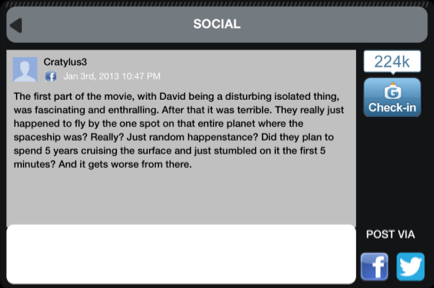 Probably the most interesting feature for me was the ability to sync the app with the actual movie viewing experience. This is the most innovative feature within the app although it requires a fair amount of technology in a home entertainment system to make it work.

You need to have a Wi-fi network that connects both your second screen (iPhone, iPad, tablet, whatever you’ve got) with your Blu-ray player. You also need to have Wi-fi capability with both your second screen device and your Blu-ray player. I used a Sony Wi-fi Blu-ray, a Sony Bravia and an iPhone. If you don’t have all the necessary technology it is possible to do a manual sync. This will sync the content on your television with your second screen device. If you use the manual option you will miss a lot of the most interesting features in the app though, I’ll cover those next. 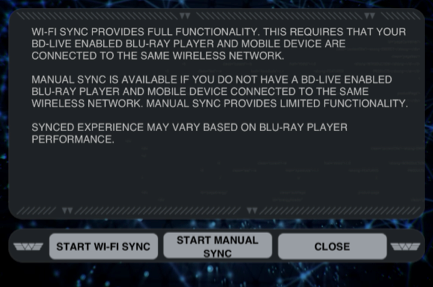 As you go through the film new content becomes available on the second screen. You can look at content such as storyboards and concept art but whenever an alternate scene comes along you can “flip” it from your second screen to your big screen. You will then start watching a different version of the film on the big screen until the alternate scene runs through and puts you back into the original film.

It can do this because the Prometheus app has the ability to act like a remote control. It uses this functionality to communicate with the Blu-ray player, telling it to go find the alternate scene on the Blu-ray disk itself and start playing it. It is like a custom playlist for the different chapters of content on the disk, the second screen app itself isn’t sending any content to the big screen itself. If you think about how many Gigabytes of data are in a single Blu-ray scene it becomes pretty obvious why the app was designed this way. 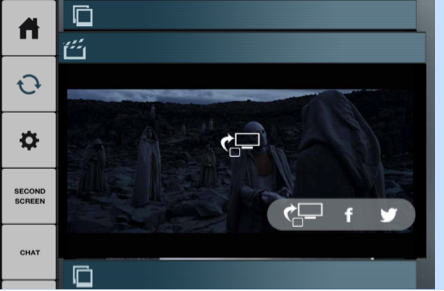 Now it’s time to forget about the technology. It is pretty impressive but what does it do to the narrative or storycraft of the film? Up until now the only way you’d experience a different version of a film’s narrative was waiting until the extended director’s cut of a film was released. Often the director’s cut would change the pacing and emphasis on the story itself. These director’s cuts were carefully edited so that the music and visuals would make sense to the viewer. It should still have the effect of luring the viewer into the story for the duration of the film. And that is where the second screen app seems to be most disruptive to one of the major goals of a filmmaker.

Although it might seem that the second screen app allows the viewer to make their own version of the film the reality was much different. The constant scanning back and forth from the large screen to the small screen is distracting. I used the app on my second viewing of Prometheus, if I had tried it on my first viewing I don’t think I would have lasted long. The activity tended to disrupt the flow of the film for me. For anyone who writes screenplays this should be setting off some alarms. In Riding the Alligator, Pen Densham talks about narratives creating a trance for their audience. Having a story that can achieve this is critical to an audience getting lost for 90 minutes in your film. The way you combine dialogue and cinematography is critical to getting your audience into that flow. The second screen provided a great way of getting into the production and creative processes of Ridley Scott but it did so at the cost of a cohesive narrative.

One of the tensions with a lot of new technologies and media is whether or not you hand over control of the narrative to the audience. When you want them to have more control over the way the narrative unfolds you sacrifice cohesion of the narrative for control. In other words the audience member becomes more active and can control their experience. In the traditional model the audience is passive, sitting back and experiencing a very cohesive (at least they hope) narrative. The Prometheus second screen app is a great example of how the approaches of control versus cohesion can conflict in a narrative.

Much like the movie, the second screen app was visually striking but not very cohesive. It had a lot of fantastic material and technically had great execution. I think it was enterprising that Fox tried this out and I hope this is just the start of experimenting in the space. I still think that we’re at the hype phase of second screen, there is a lot of over-enthusiasm that is leading to some disillusionment when the audience gets a hold of the results. There is going to be some realism that eventually sinks into the use of the new technology.

Audiences probably aren’t ready for most of the things that second screen technologies can provide. Many of them have very traditional expectations on the movie viewing experience.  Most of them are interested in being a passive participant in a film experience. This isn’t just an old school mentality.  If Pen Densham, and a lot of other screenwriters, are right, we’re biologically hardwired to lose ourselves in narrative. It is an experience that lets us escape into a story. Disrupting that experience with a second screen will affect the flow of the story and will probably affect how we judge the success of the story. There will always be some at the bleeding edge that are going to demand these interactive experiences but I believe the majority of viewers are going to give it a pass. This doesn’t mean that the technology has nowhere to go, it just means we haven’t figured out how to make it part of a narrative experience yet, that might take some time. Hopefully Fox will continue to experiment until the technology matures and reaches its true potential, many companies give when early hype doesn’t meet expectations. This technology still has the potential to have a significant impact on the way we both create and view narrative.