Add your own drives to this very fast, robust, affordable RAID 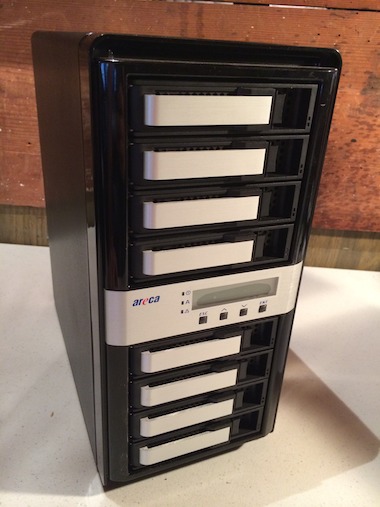 Areca’s new ARC-8050T2 is a industrial-strength 8 bay RAID that has a few unique things going for it. For starters, it uses a new Thunderbolt 2 connection, so it’s blazing fast when connected to a Thunderbolt 2-equipped Mac or PC. In fact, it’s the fastest 8 bay RAID I’ve ever tested, reaching about 1 GB/s read and writes in a RAID 5 configuration. Secondly, it’s the only big Thunderbolt RAID I’m aware of that you can buy without drives (street price is as low as $1,799 for the empty chassis), so you can buy your own drives without a markup, saving hundreds of dollars or more. I had a chance to set up and then run an 8050T2 on a number of projects for three weeks, and came away very impressed. If you’ve got even a mild do-it-yourself spirit, this is probably the RAID for you.

The 8050T2 works best and most economically with 3.5” SATA drives, preferably newer ones that use a 6 Gb/s interface and spin at 7200 rpm. You can also fill the chassis with SSDs, SAS drives and drives that spin at higher rpms, but that typically increases cost and/or noise.

The most important decision you can make about the drives you use with the 8050T2 is whether to use “desktop” or “enterprise” drives. Desktop drives are cheaper, but aren’t warranted by their manufacturers for very long — typically 2 years. They’re also not spec’d to run 24/7/365, even though they may do that just fine. On the other hand, enterprise drives are generally meant to run all day long in rigorous server settings, and typically have 5 year warranties. Personally, I would spend more on enterprise drives, and you can see a list of SATA drives that Areca has tested right here (focus on the SAS Raid Controller column, and dashes mean a drive was not tested). 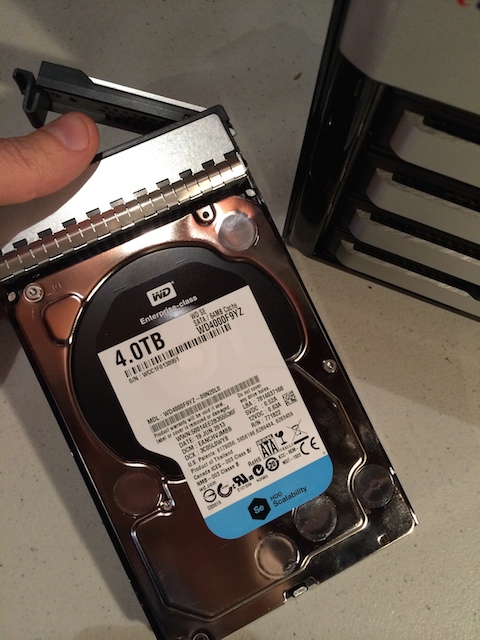 Picking your own drives to use with the 8050T2 takes a little homework, but gives you more options.

That’s a very good deal compared to other Thunderbolt 2 RAID options out there. For instance, the Promise Pegasus2 R8 RAID costs $4,599 for 32TB, but it doesn’t have the Areca's high transfer rates because it uses desktop drives that spin at 5400rpm. It also has a fairly short 2 year warranty. Likewise, CineRAID sells a turnkey solution based on the 8050T2, but they pre-configure the RAID to your specs (RAID 5, RAID 6, etc.), stock it with enterprise drives, test it all before shipping, and warranty the chassis and drives both for 5 years. There's definitely a place for that kind of service, but a 32TB model is $5299 so if you're price-sensitive, you'll save appreciable money by putting things together yourself.

Still, you should go down the do-it-yourself road with your eyes open. There are a lot of drives out there, and some may perform better with the Areca hardware than others. Also, don’t underestimate the convenience of dealing with one vendor if you have a problem with your gear. Areca is a company that’s earned a lot of respect in RAID circles, but it’s still based in Taiwan and your support could be carried out across multiple time zones via email. You’ll also need to chase down support for drive-related problems with whatever company provided your drives. On the flip side, a turnkey provider like Promise or CineRAID is easily reached by phone, and is in a good position to troubleshoot everything in one call, and get replacement gear quickly in the mail.

Personally, I’ve used an 8 bay RAID with enterprise drives for 5 years (a SAS-based Sonnet DX800), and only needed rare and light technical support for driver issues, never hardware. It’s made me comfortable with the idea of buying an 8050T2 and throwing in my own drives, but everyone’s mileage can vary.

SETTING UP THE RAID

It took about 10-15 minutes to screw my Western Digital hard drives into the 8050T2's drive sleds. After that, setup was pretty straight-forward on the 6 core Mac Pro that I used for my testing (PC setup appears to be about as easy as well). It took me less than 5 minutes to get the RAID initializing, so there’s no complicated voodoo to worry about. But prepare to wait a while — my 32TB worth of drives took about 10 hours to initialize before the RAID was ready for action.

I downloaded Areca’s latest installation apps right here, which installed a few apps in my Mac's Applications folder, and put convenient aliases on the desktop. With the RAID powered and connected to my Mac, I then used the browser-based ArcHTTP64 app to get everything running.The Areca comes with a manual to take you through all the necessary steps, but it can be a little confusing, so this progression of screen shots should help you through. 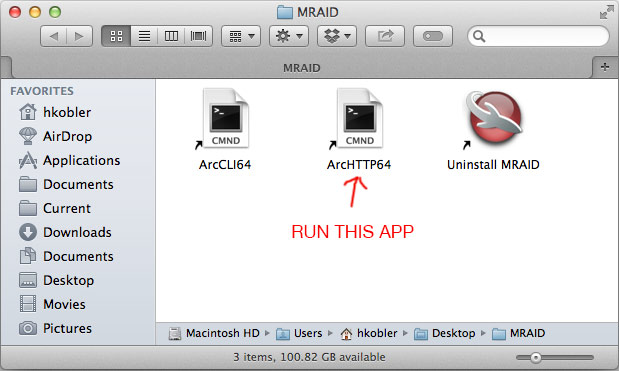 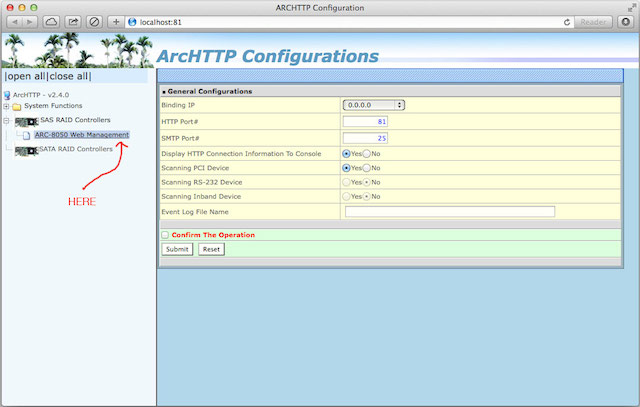 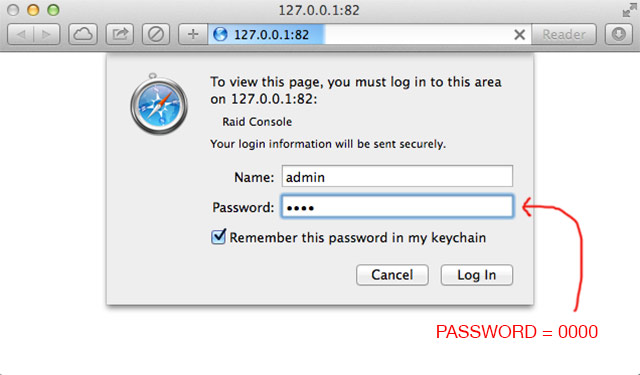 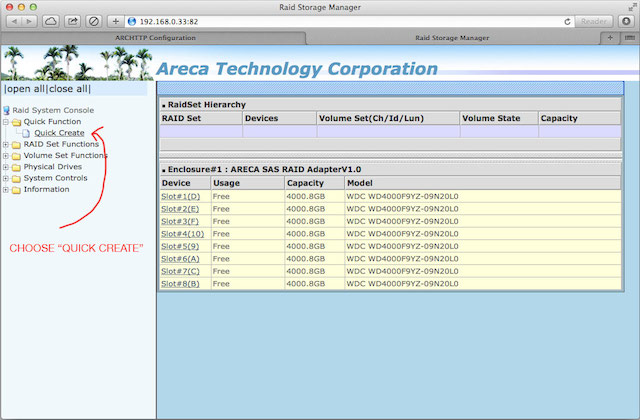 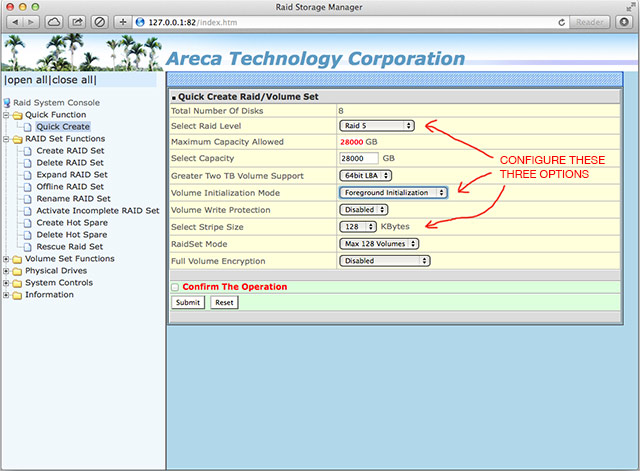 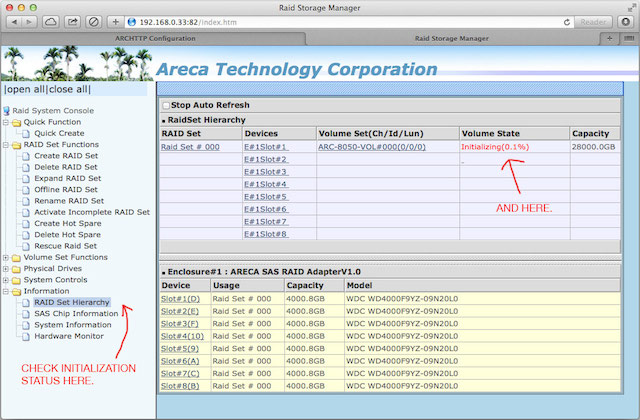 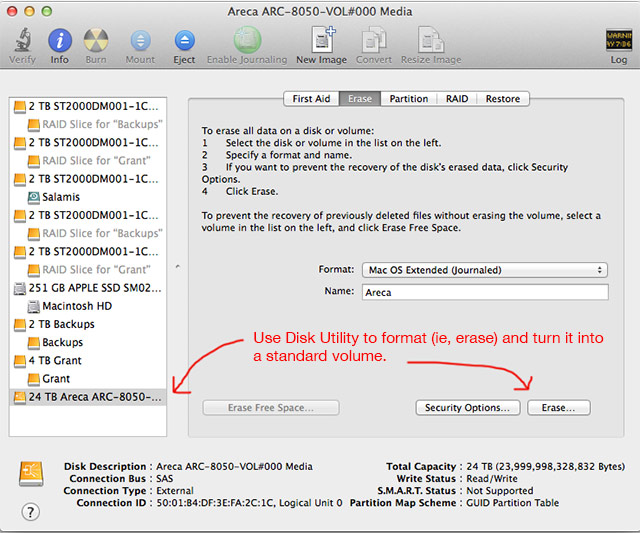 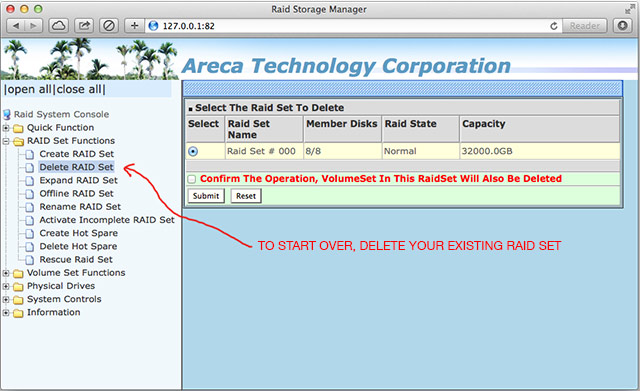 I ran both Blackmagic and AJA speed tests on the 8050T2 in two different configurations. The first configuration was RAID 5, which lets any single drive in the RAID fail while keeping your data safe (RAID 5 comes at a cost of one drive worth of capacity, so having 8 4TB drives means you have 28TB of actual storage, instead of 32TB). In RAID 5, you can see that my results got as high as 1072 MB/s for reads, and 1064 MB/s for writes. That’s fast! For comparison sake, my old Sonnet DX800 running via SAS on a 2009 Mac Pro scored in the 800s, and Promise Technologies’s Pegasus2 R8, which also uses Thunderbolt 2, clocked in closer to 900 MB/s for reads, and 850 MB/s for writes. So even among Thunderbolt 2 enclosures, the Areca is especially speedy. 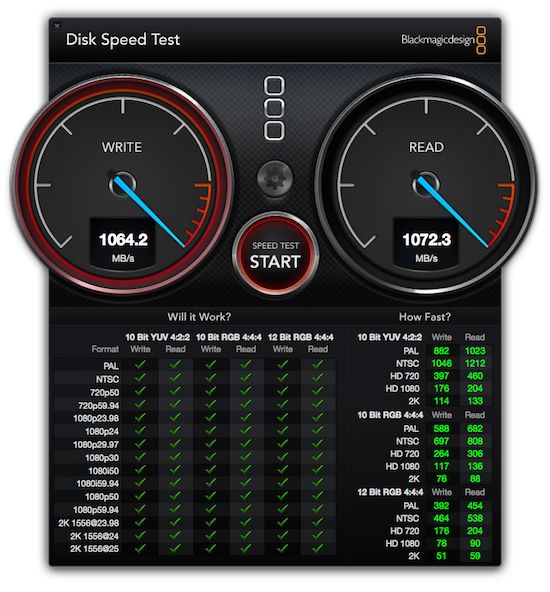 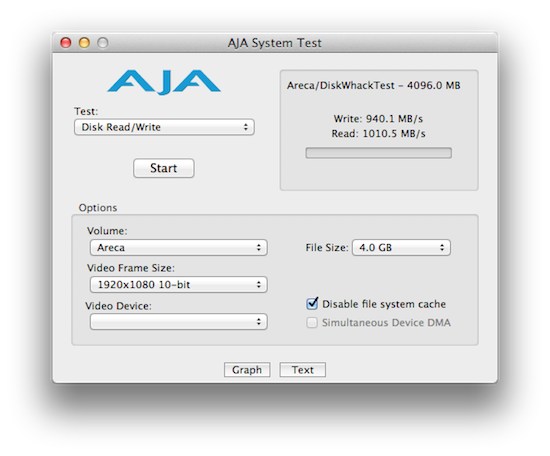 I also re-initialized the 8050T2 as a RAID 6, which lets any two drives fail while preserving data (but at a cost of losing two out of eight drives of capacity). RAID 6 always takes a little spring out of a RAID’s step, but as you can see below, the 8050T2 still posted impressive scores that could handle any footage you’d throw at it. 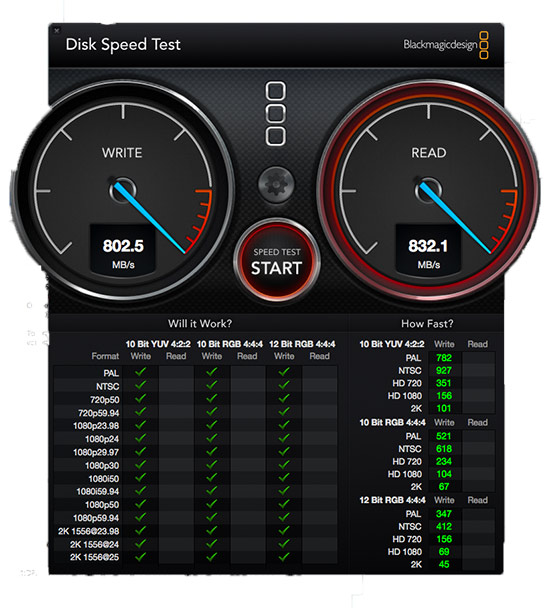 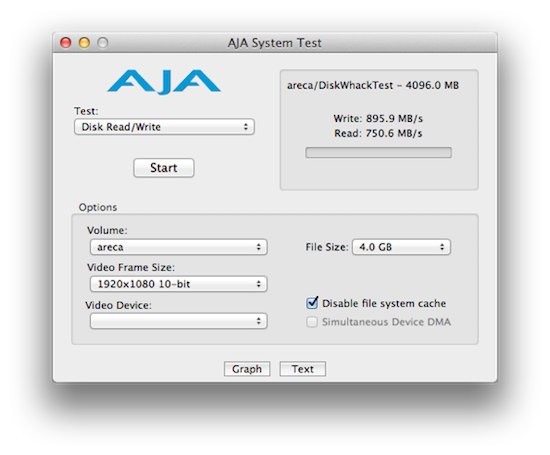 DAY TO DAY USE

Besides the speed, what I really like about the Areca 8050T2 is its pain-free, easy operation. You really forget it’s there, which is something you can’t say for the previous, pre-Thunderbolt generation of RAIDs. A few things worth noting:

If you're comfortable with buying hard drives and installing them yourself, as well as spending a little extra time/effort in securing support, then the Areca 8050T2 is your best bet for an industrial-strength RAID at a (relatively) modest price.