It’s been an eventful few days in and around the general world of film and video post-production. If you haven’t heard (but of course you have) Adobe made the decision to move all of their software licensing to the cloud, their Creative Cloud, and charge $50 a month to access to everything they make. No more paying some $1,500 up front for the Production Premium and having a box shipped to your door. While it would be nice to have a less expensive monthly access to only those video-centric apps (I’m never going to use Dreamweaver, InDesign or Muse among others) you really do get a lot for that $50 (check out the pricing page for other price options that could lower your monthly bill to Adobe).

Adobe has been offering the Creative Cloud as an option for some time so to be quite honest I wasn’t at all surprised they went down that route. The cloud is all the buzz these days and what company wouldn’t want thousands of customers paying for their product every month for as long as they wanted to use that product?

As with any big change, the Internet has had a knee jerk reaction to this news. There has been so much said on both sides of this argument that it’s not worth recounting all of that stuff here so I think the best thing to do is just link out to some of the discussion. If you really want to find the negative reactions to Adobe’s announcement then dig into some of the comments on these articles as the opinions run deep.

From our little world of film and video post-production check out Larry Jordan’s interview with Adobe’s Director of Product Management for Video and Audio Solutions. The Edit Doctor had some thoughts on the whole boxed vs not boxed software a while back. The Edit Geek also does a great job at analyzing the situation with a level head.

A search down the #creativecloud hashtag will provide hours of reading.

You could even give the Creative Cloud FAQ a read and get some answers straight from Adobe. They might even offer to chat with you about it. 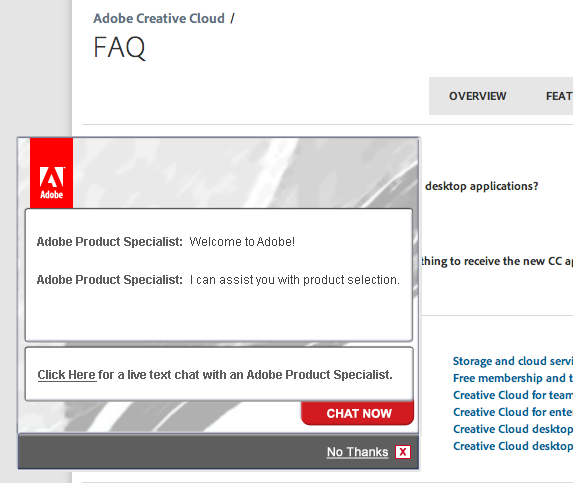 Some of the bigger tech blogs cover the story with a less emotional approach and try to get at more of the facts. Read Techcrunch, Engadget and Mashable to help understand what is going on.

This headline from Engadget got me thinking: How greedy is Adobe’s Creative Cloud subscription? Not very.

I liked this breakdown of the cost that I saw on Twitter:

As enthusiastic as many people are about what types of opportunities the Creative Cloud might offer there’s still the nagging knowledge that you’re having to pay every single month for pretty much the rest of your professional career if you want to use the Adobe applications. That in itself is not a bad thing but there has been this recent trend for almost everything under the sun to adopt the monthly payment model. That trend probably isn’t going to stop anytime soon and we might reach a tipping point in the future where people just don’t want or can’t afford to keep adding monthly fees.

As I was curious … I thought it would be fun to add up a list of current products and services that those in the film and video world might be paying for. This doesn’t include the utilities that we all have to have like internet and a cell phone but Internet-based services some of which one could more than likely do without if push came to shove. I’m sure I’m missing things so feel free to put those in the comments below. And I’m rounding up to the dollar as it’s silly to add up 99¢. These numbers won’t be exact as some services bill in yearly chunks and/or give a bit of a discount if you pay for the whole year but you get the idea.

Backblaze (or some cloud backup service) – $5

That totals up to $121 a month or just under $1500 a year. I often lament about how many things I have to pay monthly for these days so when I added those numbers up I was actually surprised that the total wasn’t more. I think more than anything it’s the mental block of not owning your own software (yes we know from software EULAs that you don’t own it anyway but Apple never came in and took FCP away from anyone who bought the box) that is the sticking point for many. I still prefer to buy my music from iTunes or Amazon instead of paying for Spotify. In the end we’re all going to have to adopt to this new kind of model as more than likely you’re going to need some Adobe products. There are alternatives to Adobe’s products out there and from an NLE standpoint we know about Avid Media Composer and Final Cut Pro X. You could even help bring HitFilm to the Mac and that would be one more. But one reason to use Adobe’s tools isn’t because you have to but because they are making some really great post-production software these days. Adobe Premiere Pro CC is a very good upgrade. I’ve been able to use it and Adobe has been listening. There’s no reason to think they’re going to stop listening now so I’m looking forward to the upgrade advantages the Creative Cloud will bring to make PPro even better. When FCPX came out a common response to the chatter was if you don’t like it move to something else as there’s a lot of alternatives out there. The same can be said for Adobe’s products. But unlike the polarizing and paradigm changing FCPX most editors who give the current version of PPro a try will probably really like it as it feels like a good NLE should. And you can do some great work with it. That’s what I most look for in my tools.