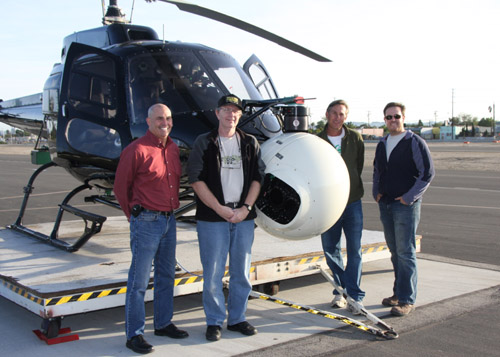 Pictorvision announces that Artbeats, in collaboration with cinematographer Doug Holgate, has chosen the new eclipse 3D aerial rig for a stock footage shoot. “We pride ourselves in specializing in footage that is difficult to shoot, things that have high production value,” explains Artbeats’ Phil Bates. “Since we believe that 3D is in our future, we wanted to be ready for it. To push-the-envelope in footage capture, we turned to the one company we knew could make it happen – Pictorvision. Not only is their aerial equipment the best, their gyro-stabilization was a must for aerial cinematographer Doug Holgate.”

For this initial 3D venture, Bates and Holgate decided to shoot footage off the coast of Catalina, fly through Long Beach, downtown Los Angeles, Mount Wilson and back to Catalina to get images of birds lifting off the rocks and other visuals. “Before we began the actual shoot we did extensive tests with Pictorvision,” says Holgate.

“We needed to find a middle ground; not too close to our ‘objects’ but not so far away that the images don’t appear 3D. Traditionally, in 3D you don’t want to go to the long end of the lens, past 35mm or stay wide. We went deeper on everything. When we got back to Pictorvision, we viewed the tests on Tom Hallman’s 50-inch 3D monitor and it was amazing.

“Pictorvision was really there for us,” he adds. “They put trim knobs that acted as wheels on their gear, so I could get off the joystick and induce a pan or tilt. It was designed so that, once the pan rate was selected the equipment would maintain that rate of pan until I turned it down to stop it. They really listen to an operator’s needs and that makes all the difference in a difficult shoot such as this.”

“Pictorvision’s technician Jake Capistron did an incredible job putting together the rig to handle the two RED cameras with Angenieux Optimo 17-80mm lenses,” says Pictorvision’s Tom Hallman. “The benefits of using the eclipse with its ability to handle large payloads, absolutely level horizon and perfect stabilization really showed its value in 3D on a big screen. Our custom software to control the cameras and lenses allowed our DP to focus on his framing, and not worry about the added complications of keeping the two images in sync.”

“Thanks to Pictorvision’s help, Artbeats now has some great 3D aerials available for production companies that are finding budget or time constraints make it difficult to put an aerial shoot together,” says Bates. “We’re looking forward to doing more with them in the near future.”