A futuristic love story set on a spaceship, Passengers required the sound crew to imagine and create the sound of the future using today’s tools. 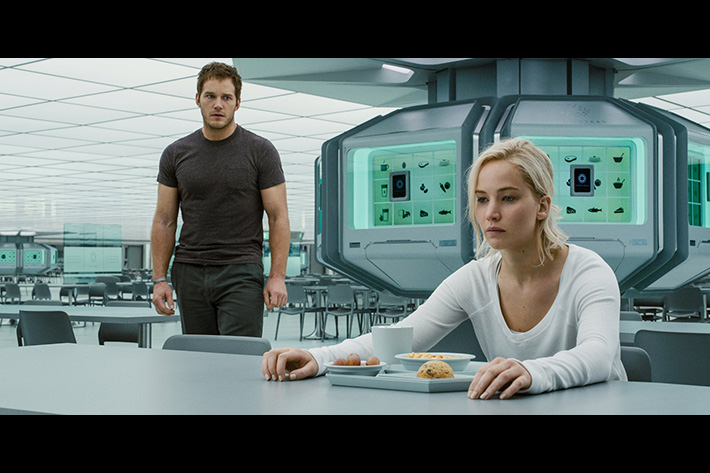 The sound tapestry inside the spaceship in Passengers may sound as something from a distant future, but it was created with things as simple as glass rolling on a desk or squeaks of an office chair.

Passengers, from Director Morten Tyldum and Sony Pictures Entertainment, is a futuristic love story set on a mammoth spaceship carrying thousands of passengers, kept in sleep chambers, to a distant planet. Stars Jennifer Lawrence and Chris Pratt play two of those passengers who, through an equipment malfunction, awaken 90 years early.

Immersing the public in the love story of Passengers relies a lot on the sounds that the two passengers awaken 90 years earlier than planned listen to. Imagine a spaceship almost empty of life, except for the two people awaken, too soon, from induced hibernation, and you’ve the setting for a new love story. Released in the United States on December 21, 2016, by Columbia Pictures, Passengers has Sound Editor and Re-Recording Mixer Kevin O’Connell and crew as the team responsible for inventing the sounds of everyday life inside the spaceship Avalon, transporting over 5000 colonists, in hibernation pods, to the planet Homestead II, a journey that takes 120 years.

For the sound team, based at Sony Pictures Post Production Services, and led by Supervising Sound Editor/Sound Designer/Re-Recording Mixer Will Files and Re-Recording Mixer Kevin O’Connell, the space epic presented the interesting challenge of imagining the sound of the future. Among other things, the crew needed to come up with hundreds of sound effects representing various aspects and functions of the space craft as well as the large assortment of robots that serve as its crew.

Working in close collaboration with Tyldum, picture editor Maryann Brandon and composer Thomas Newman, Files, O’Connell and their crew began producing sound elements and temp mixes shortly after live action was complete, but at an early stage of visual effects production. Sound production, then, went through successive stages of development, elaboration and refinement as visuals were more fully realized, a process that continued nearly to delivery.

One recurring creative challenge was to imagine the sounds of future technology. “There are a lot of motors on the ship, but we didn’t want to use traditional motor sounds,” Files notes. “That would sound too familiar and too low tech for a state-of-the-art spaceship hundreds of years in the future. We tried to give everything a twist to take it out of our normal everyday world.”

Files points to the mechanical effects that were applied to some robots. “We wanted it to feel warm, friendly and cute,” he says, “so we collected sounds that had nothing to do with robots. We recorded glass rolling on a desk to give the motor a whirling sound. We also recorded the squeaks of my assistant’s office chair and that became a component of the robot’s voice.” 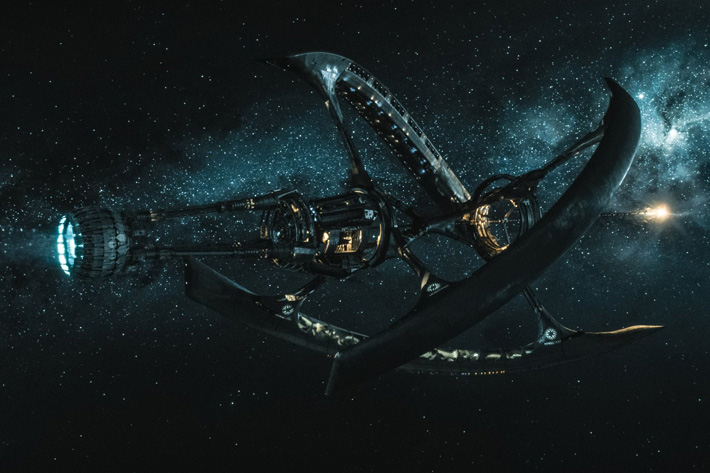 In fact, many of the robots have voices as did the ship’s central control system, and they “talk” with the actors. Hundreds of voice actors auditioned for robot parts. Files notes that an especially lengthy search was conducted to find the voice for the ship’s central computer. “It needed to be authoritative, but pleasant,” he observes. After several unproductive casting sessions, Files recalled a voice he’d heard while visiting England. That led him to actress Emma Clarke whose voice is familiar to patrons of London’s Underground with its gentle admonition to “Mind the gap!” “She was perfect,” Files says. “Exactly what we wanted.”

Computer and robot voices were modified to give them a not-quite-human sound. “We doubled up the tracks with a perf or two offset so that they were a bit out of sync, and added different levels of futzing” explains O’Connell. “Sometimes Morten thought it became too mechanical and we brought it back to a sound that was a bit more human, but we still made it sound like it was coming from a machine, rather than a person.”

Summing up the months-long effort to build the soundtrack, O’Connell stressed its collaborative nature. “Many people contributed to the sound of this film,” he says. “Ultimately, we were all striving to fulfill Morten Tyldum’s vision and applied all of our talents to get there.”

Files concurs. “It was a very satisfying project because we got to try a lot of creative things and we had enough time to get it right,” he says. “It was a challenge but it was also a lot of fun.”