Nvidia introduces Lenovo IdeaCentre PCs and Monitors with built-in, stereoscopic 3D Webcam and, at the same time, expands its 3D Vision ecosystem to include more than 1,000 supported products. 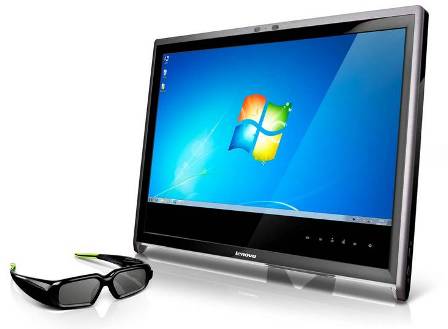 Nvidia’s new 3DTV Play software enables consumers to attach their PC or notebook to 3D HDTVs and HDMI 1.4-capable audio/video receivers to enjoy all the latest 3D content in the comfort of their living rooms in full HD 3D, and with HD surround sound audio. 3DTV Play software is bundled free with 3D Vision notebooks and PCs, and is available now at Nvidia’s online store for $39.99.

“By joining the growing list of OEMs selling 3D Vision PCs, Lenovo will enable more consumers throughout the world to experience high-quality 3D entertainment on their PCs,” says Phil Eisler, general manager of 3D Vision at Nvidia. “And, with the new Lenovo monitor, consumers for the first time can experience high-quality stereoscopic 3D web conferencing on a desktop PC system.”