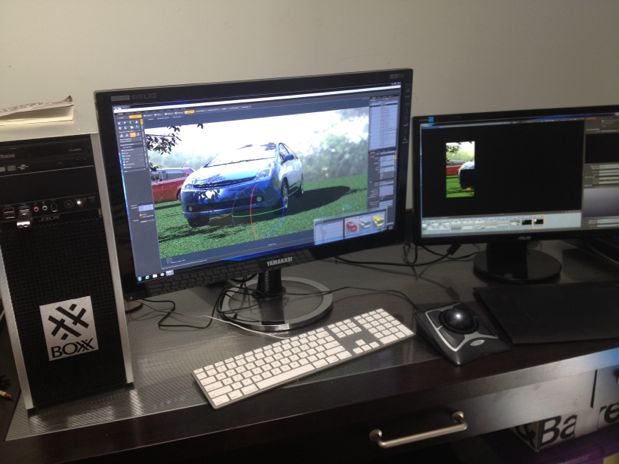 A few months ago, I set out to explore the 3D landscape for the small post house owner. I couldn't have picked a more complicated season to do it. Caveats, I am not a 3D artist by trade or training; I have a very basic conceptual understanding of 3D* technology and almost no practical experience; I'm allergic to following instructions.

2012 looks like it was the year of “3D for the rest of us”. It's daunting, intimidating and exhilirating. I can only equate it to a few years back when camera manufacturers, old and new, started flooding the market with afforable large sensor based cameras. Our “videos” suddenly looked like “movies” and we, overnight, started dinging new cameras if their sensor wasn't big enough — like we hadn't just spent the last twenty years shooting on tiny CCDs.

I think the Summer 2012 was a similar moment for 3D. It's a perfect storm of plummeting prices for both hardware (not unusual) and software (kind of unusual in this market). The big iron, ILM class digital vfx software suites, once priced into the stratosphere went on a fire sale, while brand new, incredibly robust and affordable competitors appeared on the scene.

Toss in the completely new space of OpenGL GPU accelerated 3D plug-ins for After Effects (Trapcode Mir and Video Copilot Elements), along with After Effects CS6 Raytrace engine, and we suddenly have a very wide set of tools to use in a very familiar desktop companion.

My survey started with Autodesk Ultimate Creation Engine 2013 and a loaner BOXX Windows 7 Machine with nVidia Maximus hardware. The year is wrapping up on my old, albeit souped-up, MacBook Pro (see my last article) with Modo 601, Trapcode Mir and Video Copilot Elements. I was wow'ed by what I could do with the Autodesk Suite and the Maximus system (simply amazing things), but I was also blown away by what my “out-of-date” hardware could do with all those new apps.

When writing about 3D anything these days, you have to account for a kind of “uncertainty principle” as things in the industry change at a faster rate than one can document them. For instance, Luxology, makers of Modo and The Foundry, makers of Nuke, Katana, etc, used to be two companies. Now they are one. Developers merge, they one up each other with new releases, and plug-ins pop up out of no where. You can't really ever use the term “game-changer” (nor should you), the game IS change. You can hang on by your fingertips as this all rockets into different and exciting new directions.

A Summer of 3D required the right machine — A Windows 7 machine. Why Microsoft?

The simple answer is that I can't run all of Autodesk's software on a Mac, just a tiny, although important, subset (Maya & Mudbox) is ported to OSX. I am a Mac user, my first post-production machine was a Mac IIci with a ToasterLink card to send still frames back and forth to my Toaster 4000 rig. I even worked at Apple, Inc. a long, long time ago. I'm not a total Windows moron, there have been plenty of times when I've had to get work done on a Windows box. But by and large, I have avoided the OS from Redmond, and I think it is totally just momentum at this point, not a behavior based on rational thought.

The fact is, there are way more options when building fast, reliable high-end towers on the Windows 7 platform. There wouldn't be such a vibrant Hackintosh community if were otherwise. For this project, I was not interested in building my own machine just so I could write some articles. I researched on-line and found a wide variety of companies that will build machines for me. On the big, huge corporate-end there is HP and the HP Z8xx series. These are their high-end boxes, outfitted with high end CPUs, GPUs and a solid build quality. These high-end towers are for every kind of high-end there is: medical imaging, number crunching, 3D animation, etc.

I wanted to find a company that built machines specifically for 3D animation and VFX pipelines. There are quite a few, but the winner, in my book, is BOXX Technology out of Austin, Texas. They're my winner for two reasons: they build bullet proof machines (you could park an elephant on the one I tested**), and you could not find a nicer, more down-to-Earth group of people to talk to. BOXX understands the needs for 3D and VFX workflows and companies, small and large. 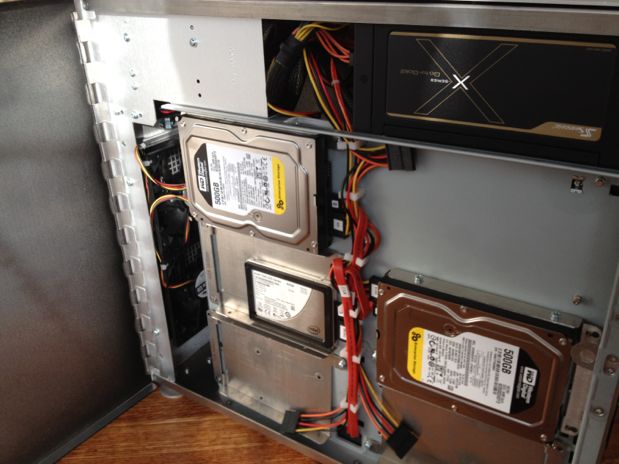 They build everything from affordable entry level workstations that multitask everything, on up to dedicated blinged out workhorse connected to dedicated render farms. When it came to deciding which BOXX machine to use, I went with the more humble of their offerings, a quadcore Intel Core i7 3820 in their 4920 machine. When it came to GPU, I splurged and had them put in an nVidia Quadro 2000 and Tesla C2075 (aka Maximus).

Why the Maximus in such an entry level machine?

To test the hype.

I wanted to see what pouring limited dollars into a GPU animation solution would get the single-person shop. What would an artist get if he or she bit the nVidia Maximus bullet?

The short answer is: a whole lot for a few things, not that much for most things.

nVidia Maximus, the pairing of one of the “pro” nVidia Quadro graphics cards with one or more of their Tesla co-processor cards delivers a tremendous amount of real-time rendering power in specific apps, doing specific kinds of things. It's amazing to watch massive numbers of particles bounce and dance around at 45fps in Autodesk 3DS Max, but if you're not doing a ton of simulation or CAD work, it becomes a lot of expensive power rarely utilized.

Add in the fact that sooner or later, you will bounce that project from RAM, through the CPU and on and off of your hard drive(s). You'll wish you'd spent some of that GPU money on other parts of your machine.

This is where the BOXX box starts shining. While I was so distracted trying to make the Maximus system do tricks for me, I hadn't noticed how incredibly fast everything else was considering I was using an entry level quad core machine. BOXX builds balanced, finely-tuned systems. They bounce data back and forth from SSD caches, dual SATA drives and RAM. The Core i7 CPU was not overclocked, but it had a built-in proprietary cooling system just in case it heated up (however, I rarely ever heard the fans turn on, the machine stayed cool and quiet through all my testing).

After a week of testing different apps and workflows, I found myself having fun with a lot of non-Maximus stuff. After Effects, Premiere and Photoshop cruised with 4K media and projects. Luxology's Modo 601, a 3D app that pulls a lot on CPU resources was fast and responsive in it's realtime viewport renders. In fact using Modo 601 on the Boxx machine is the closest I've come to experiencing that whole computer-is-a-camera feeling — when the awkward artifice of the UI drops away and I am “directing” objects and the camera. But that is another article entirely.

Which is why I am left scratching my head about nVidia's strategy — why are the very affordable GTX cards, perjoratively called “gaming cards”, as fast, if not faster, than their very unafforable Quadro + Teslo Pro cards?

The argument is that the Quadro cards are made by nVidia, not the seemingly infinite number of manufacturers that build the GTX cards using technology licensed by nVidia. nVidia also writes the drivers, does tech support for their cards and works directly with software companies like Adobe to ensure compatibility. That's the thinking. And I think it's makes sense if I was a big VFX company, ready to drop 10-20K on 3D workstations for my pipeline.

I'm not. And I think I'm like a lot of people in the market for hardware right now. I am far more likely to take 15 grand and buy two “entry level” Boxx machines — Quad or Hexacores with multiple GTX cards. I'll have plenty of CUDA cores, plenty of acceleration in the Viewport of a 3D app, and when it comes to CPU rendering, a good amount of power to throw at it. If I want to have an overclocked CPU and RAM, BOXX can do it. Not in the “smoke my proc and brag” gamermod-fanboy kind of way that makes most professionals shy away from overclocked machines. Rather, they can overclock to get the most out of the cycles without overheating and killing the machine.

Will it be as fast as the Maximus system for Maximus enabled stuff?

As stable overall as the Quadros at GPU processing?

Probably not, but now I have two machines instead of one, getting twice as much work done. Further, how many old machines do you have sitting in a closet or have sent off to recycling in the last decade?

These machines have a very finite lifespan, the GPU has a wildly short half-life and will get pulled and replaced faster than the tower it's in. I'm not going to spend the equivalent of another tower on a graphics card when I could buy another tower, or just save the money for other parts of my business.

You Could Build A Machine But Why?

It's true, you could go on NewEgg and buy a bunch of components, then stuff them into a ready made tower and save even more money on parts. I really thought about doing that. If you're a gearhead who likes to build stuff, go for it. It is amazing what you can put together yourself. If you're a small company or a one-person shop, I think you're much better off buying a pre-built system with a three year warranty and someone you can call or email when things go terribly wrong.

The folks at Boxx gave me their personal cell phone numbers.

*By 3D, I mean computer generated imagery (CGI), not Stereoscopic 3D (S3D), just to be clear.
** I don't know if an elephant could stand on one of the BOXX machines and I don't recommend it.

DISCLOSURE: BOXX loaned me a machine to use for a month, and only a month. I had to pay shipping costs to return it. I receive no discounts or free computers. I tested Autodesk software and Modo 601 using review NFR copies, I cannot use the apps for professional use. I tested Adobe CS6, VCP Element and Trapcode Mir with my own copies (on Mac) or with the 30 day download trial (CS6 Windows) copy.