A documentary about a film, that’s how Not a War Story can be classified. But it is more: it’s a film about the military veteran community and the craft involved in the making of another film: Range 15. 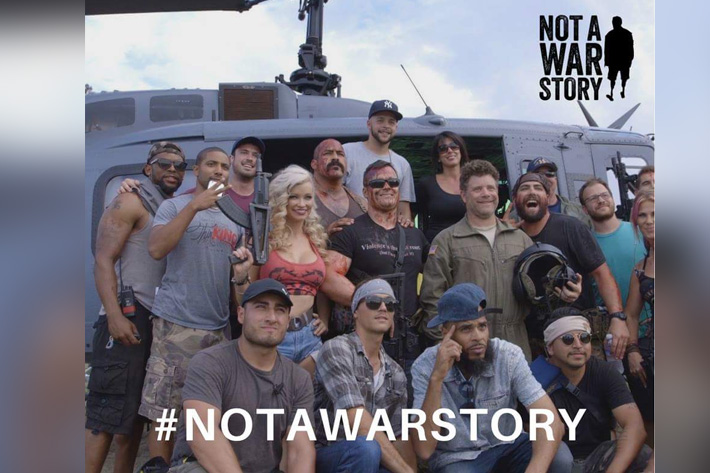 Military and entertainment will gather for the world premiere of Not A War Story at the Academy of Motion Picture Arts and Sciences on June 30, 2017. Proceeds from the event will benefit veterans across the United States.

Directed by award-winning filmmaker Tim O’Donnell and produced by veteran Nick Palmisciano, Not a War Story is a feature length documentary about the military veteran community, their aspirations and the craft involved in the making of Range 15, an independent narrative film produced by military veterans released in Summer 2016.

Range 15, which inadvertently became the single most decorated movie in history with 2 Medals of Honor, 1 Navy Cross, 2 Silver Stars, over 30 Bronze Stars and Purple Hearts, is not your usual war movie. In fact, although to the casual observer it may appear to be nothing than a bawdy, slapstick satire of Hollywood zombie apocalypse and military films, for those serving in the armed forces, the film was rife with inside jokes and jargon, and perhaps a resounding reclamation of Hollywood portrayal of military life and community. 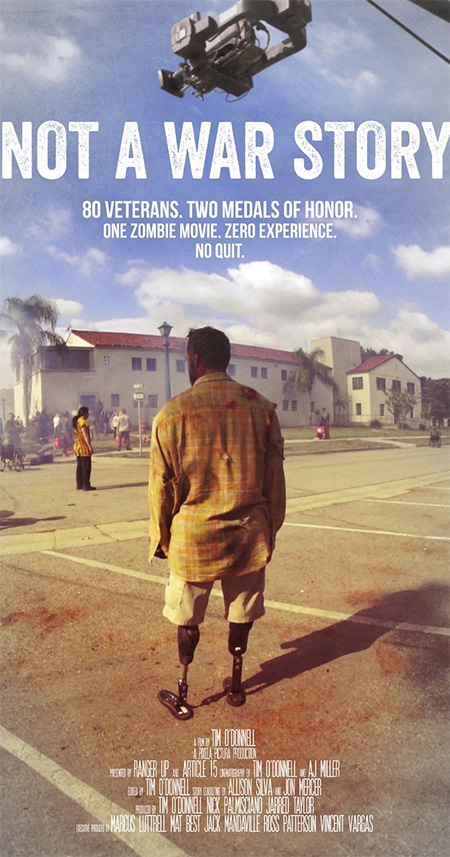 On the morning of the theatrical release for the Range 15, which screened in 500+ theaters, ISIS issued a death threat to all military gatherings in movie theaters. That didn’t stop thousands of veterans from all around the country to band together and turn Range 15 into an instant cult classic that later premiered #1 on Amazon and #2 on iTunes.

The story though, says Assal Ravandi, CEO Academy of United States Veterans, “ is less about the success of the film. It’s simply about a community that grew up fighting for each other on the battlefield and coming to do it once again in ‘Hollywoodland”. They committed to a mission and regardless of the challenges that came their way, they overcame and in the process, managed to show the world the raw love that veterans have for each other. These men and women aren’t broken, nor are they perfect. They’re simply human. But when they are together they are far more than that, and for one shining moment, they are all once again, a unit. This is a film whose back-story includes a lot of heart and a lot of heroes.”

“Range 15 was the ultimate goal for so many of us – to actually make a Hollywood movie, but as with most things in life, the beautiful part was the journey”, says producer Nick Palmisciano. “Not a War Story captures that journey in graphic detail, to the point where watching the footage for the first time actually made me relive the anxiety of making the movie. I cannot tell you how happy I am that we brought Tim O’Donnell on at the very beginning to capture that journey. Forget for one minute the challenge of having six big personalities trying to agree on script, locations, and actors. That’s true for every movie. The real challenge came in two forms: our total inexperience with the industry and the bias and corruption of the industry.”

Nick Palmisciano adds that “there were so many times when we were shunned for being veterans, when we ran out of money, when we had to deal with bad people who exploited our situation, that seeing Range 15 actually hit the big screen felt like a miracle. But every time we hit a brick wall, the veteran community rose up and refused to let us fail. And their support gave us the drive to push through the bleak times and deliver. I doubt I will ever be part of something as magical as those two years ever again, and I’m thrilled the world will have an opportunity to see the blood, sweat and tears that went into this effort.”

“As veterans, we all believe in an old fashion conviction called public service. We wear our title of veteran as a badge of honor. As brothers and sisters in arms, we are called to confirm our values and our vows, to hold them against a hard reality and see how we are measuring up to the legacy of those who served before us and will serve long after us. Not A War Story, speaks loudly to that truth”  says Assal Ravandi.

Now, military and entertainment communities will unite as the Academy of United States Veterans (AUSV) hosts the world premiere of Not A War Story at the Academy of Motion Picture Arts and Sciences Samuel Goldwyn Theater, located at 8949 Wilshire Blvd ― Beverly Hills, CA 90021. A Pixela Pictura Production presented by top military apparel brands Ranger Up and Article 15, Not A War Story red carpet arrivals will begin promptly at 6 pm PST with a formal screening to follow at 7:30 pm PST. Through support, promotion and recognizing veteran service organizations, veteran programs and veteran-owned businesses nationwide; AUSV illuminates the work of like-minded groups such as those featured in Not A War Story. Their goal is to maximize collective impact through collaboration and cooperation within the veteran community and Hollywood for this film.

Proceeds from the event will benefit Gallant Few 501c3, whose mission is to prevent veteran isolation by connecting new veterans with hometown veteran mentors, thereby facilitating a peaceful, successful transition from military service to a civilian life filled with hope and purpose. The premiere will also benefit the Warriors Heart Foundation, treatment provider to adult men and women 18 and older who are seeking inpatient treatment for chemical dependency, alcohol abuse, and co-occurring psychological disorders relating to PTSD (post-traumatic stress disorder) or the psychological effects of MTBI (mild traumatic brain injury).

NotAWarStory premiere tickets are available for purchase at the Academy of United States Veterans. 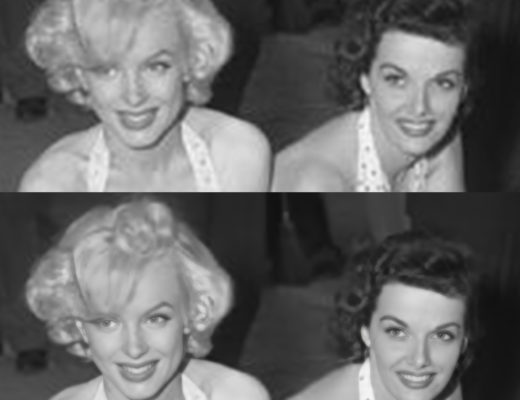