Take the digital 5600k plunge–your camera will thank you! 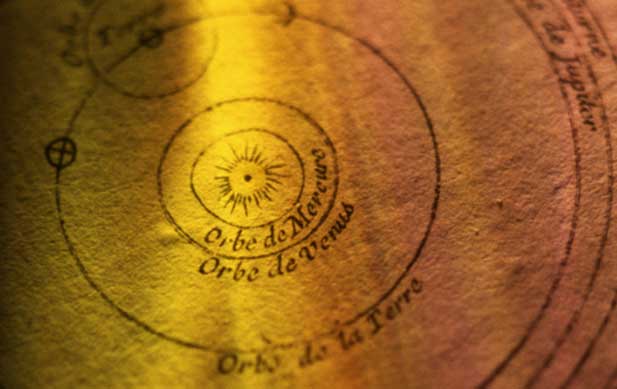 One of the first things people seem to notice about the Sony F35 is that it has no filter wheel. “Aha,” many say, “this is the ultimate film-style HD camera. I’ll actually need to use an 85 filter in the matte box when shooting outdoors, just like a film camera. Finally an HD camera I can understand!”

The first time I ran into the “D5600”–or digital 5600k white balance–option on a camera I thought I was being conned. It was on a Sony D50 industrial camera and the filter wheel consisted only of ND’s. Daylight compensation consisted of a single button, labeled “D5600”, so I figured there must be some trick going on that I didn’t quite trust. “All of the other video and HD cameras I use are tungsten balanced because they all have a filter wheel containing a color correction filter,” I surmised, “so Sony must be cutting costs by avoiding the orange filter, boosting the blue channel artificially and compromising the image in some way.” I resisted the idea of simply pushing a button to achieve a daylight color balance, thinking that clearly the proper way to color correct would be to use an optical filter just like every other video or HD camera I’d ever used.

When the RED came out there was a lot of buzz about it being a “daylight-balanced” sensor. This is a big deal because cameras are frequently, if not primarily, used in tungsten environments, and who would make a camera that was so obviously biased against tungsten? It turns out that Mother Nature would, because ALL cameras with silicon sensors are biased toward daylight.

Silicon itself doesn’t really “see” colors, at least not in a way that is directly translatable into a usable signal. Red, green and blue colored filters in front of the sensor (or sensors) pass only a limited spectrum of light to underlying photosites, which then create an electrical signal. That signal is passed to a processor that “knows” what color of light is being sensed by that particular filter/photosite combination.

Here’s a graph that shows how silicon “sees”:

(linked from the Delft University of Technology)

Different colors of light cause different reactions in silicon, and that results in varying voltages that are then quantized (or converted into steps of luminance) by the analog/digital converter. Based on the graph above we can see that blue (roughly 400-495nm) is the least “powerful” color in terms of how a blue-filtered photosite will respond. Green (roughly 495-570nm) is next strongest, and red (roughly 620-750nm) is by far the strongest of all. (Silicon sensors are extraordinarily sensitive to IR and “far red” and are heavily filtered as a result.)

As silicon sensors are least sensitive to blue it only makes sense that they are “daylight balanced” because daylight is overwhelmingly blue. The weakness of the blue channel is overcome by the sheer volume of blue in daylight. Tungsten is the weak spot of silicon sensors because tungsten light is very warm, meaning it has very little blue in it. In order to get a proper color balance under 3200k light, gain is added to the blue channel to punch it up a bit. And we all know the result of adding gain: noise!

That’s why blue is always the noisiest channel in any HD or video camera, at least under tungsten light or daylight with a corrective filter. When you add additional gain overall (say, +12db) the resulting noise will contain a lot of blue specks because the blue channel, under tungsten light, has already had gain added to it. It’s being “pushed” farther than the other channels.

See the proof on page 2…

The Sony F35 is probably the quietest camera in the world, which is why I really had to exaggerate to show this process in action. I shot a DSC color chart twice: 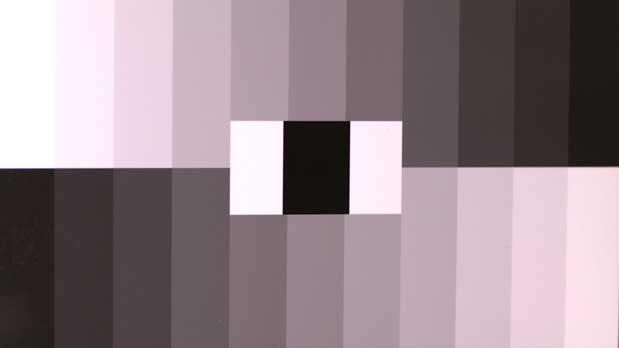 And then, under 5600k daylight, in tungsten mode with an 85 filter and all other settings the same: 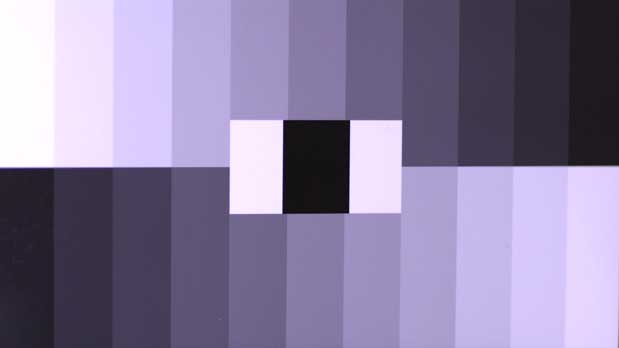 In Final Cut Pro I zoomed in 1000% so that the black chip filled the frame. Here are the resulting waveforms: 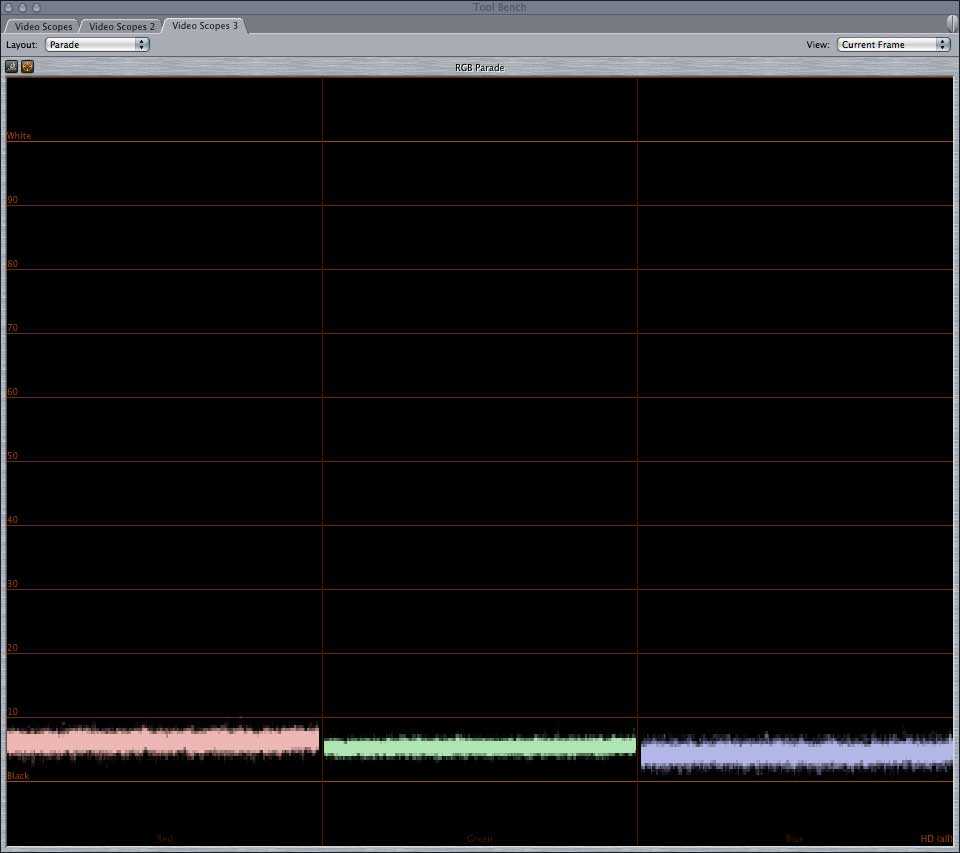 Next, tungsten mode with an 85: 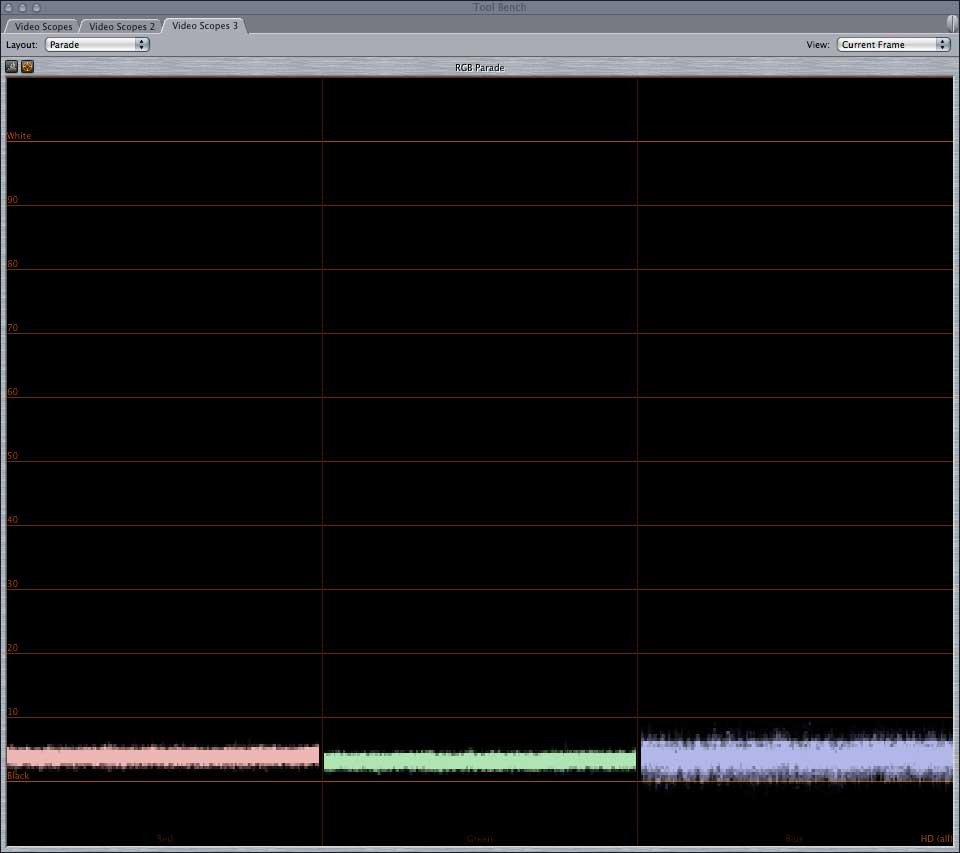 What’s interesting is that the red channel is much quieter in tungsten mode but shows a little noise in D5600 mode. (The expanded width of the red line indicates noise.) Under D5600 red and blue show about the same amount of noise, although blue is considerably quieter than when using an 85 filter. In the test with the 85 filter the red channel is very, very clean–although the blue channel is a lot noisier.

My opinion is that the increased red noise under D5600 isn’t anywhere near as much of a problem as the increase in blue noise with an 85 filter. Remember, though, I had to zoom in 1000% just to see this little bit of noise. The Sony F35 is the quietest camera I’ve ever seen, in both tungsten and daylight, and my preliminary tests show that I can push it to +9db before seeing any objectionable noise. And even then it’s quieter than any other camera I’ve seen at +9db.

What this should tell you is that you don’t need to carry an 85 filter EVER when using this camera. You won’t need to add any color correction to shoot in daylight, and take the resulting exposure hit, when shooting low light day interiors or at magic hour.

So next time you’re shooting in 5600k light with an F35, leave the filter case alone and instead go to the first OPERATIONS menu page and turn the “D5600” option to “on”. And make sure production knows that you’ve saved them a $10 filter rental.