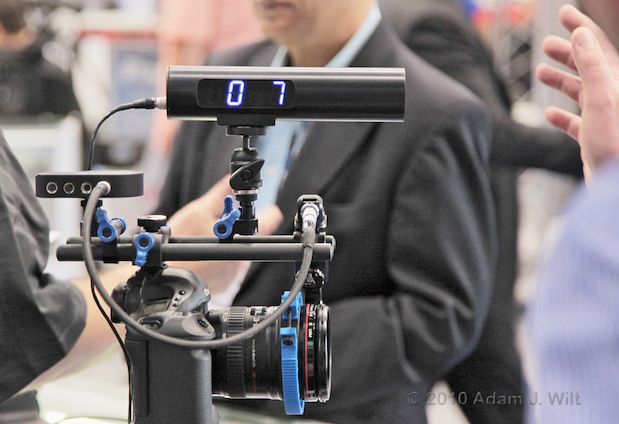 An ultrasonic rangefinder with focusing-distance readout for $500? Read on…

…but first, some serious slider action: sliders allow smooth camera motions over (relatively) short distances without the bother of having to set up dolly track. Since all the slider is carrying is the camera, not a whole dolly, the slider’s track can be a lot smaller, lighter and easier to rig. 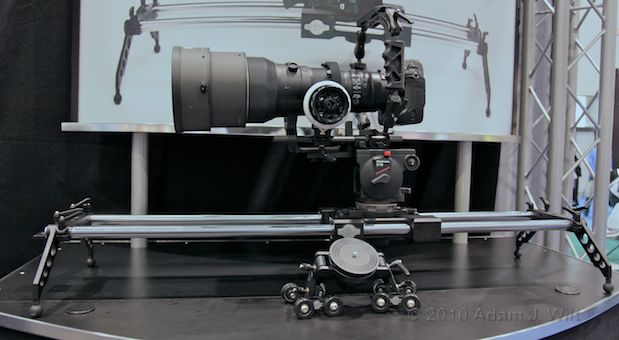 This Cinevate system uses recirculating-ball races on 1″ rods. The 200 series can support 200 pounds of gear. A smaller system (Atlas 30) uses 5/8″ rods and supports 30 pounds—plenty of capacity for DSLRs and handycams. 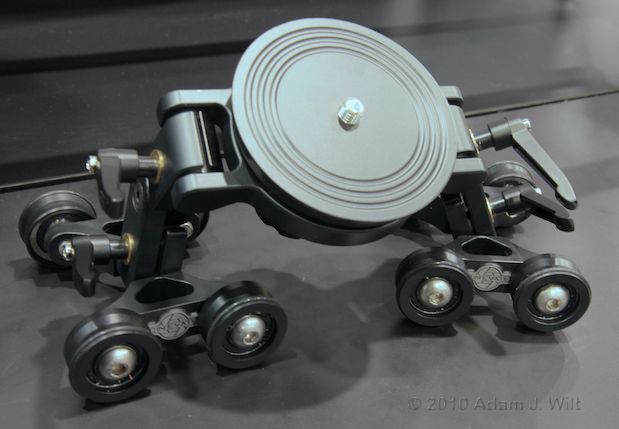 The Pegasus table dolly works on any smooth surface, and can also work as a slider platform on rods. 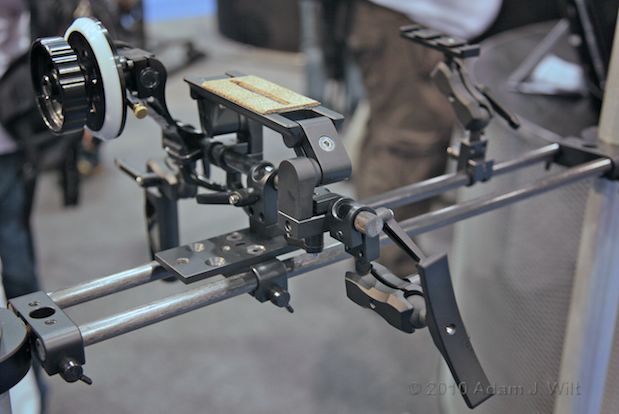 Cinevate, of course, builds more than sliders; they have all manner of rods, rails, and other bits of support gear. 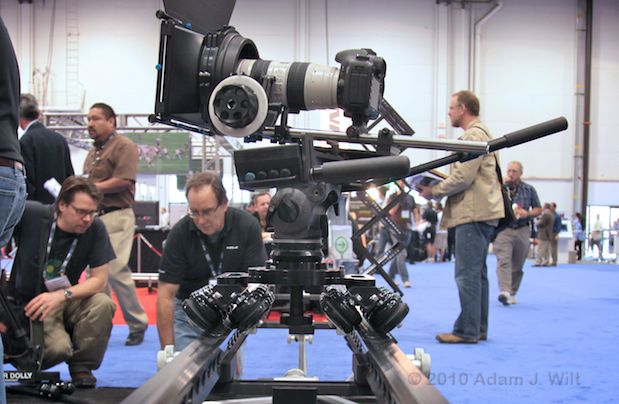 The Losmandy Explorer system, sold by Porta-Jib, is a modular system that converts between a jib arm and a trolley system (think of it as a very serious slider system). 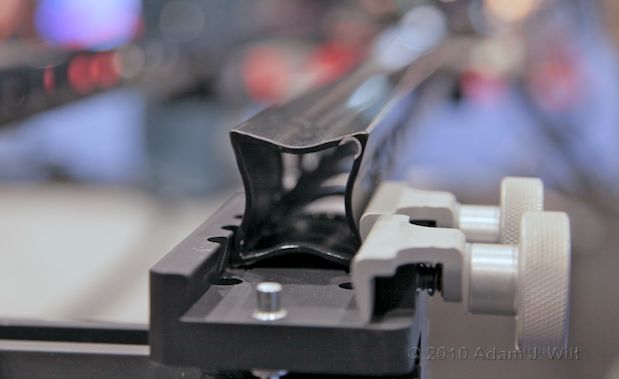 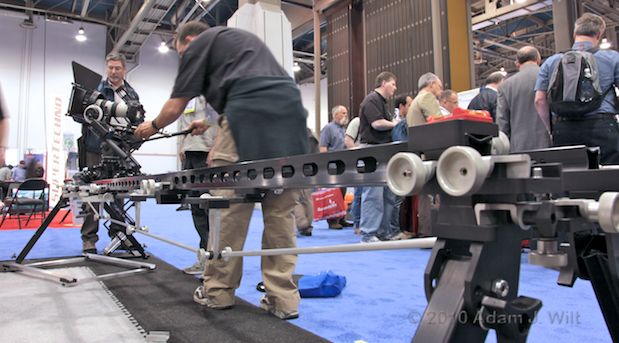 Using tension rods beneath the beams allows the system to span long distances without intermediate supports, useful for rigging the slider across streams and gullies. 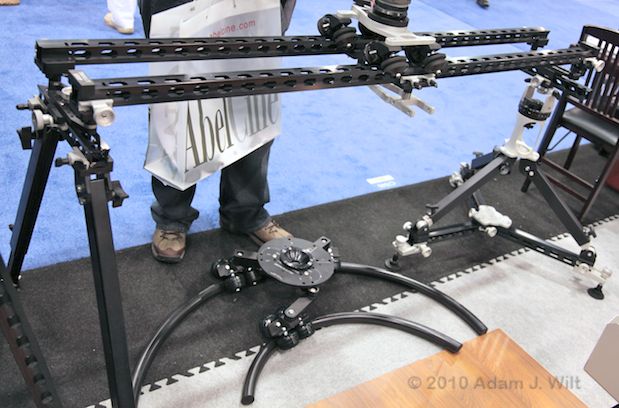 Tracks set up on tripods or on monopod “feet”.

Slider ends can be mounted on standard tripod heads, or on monopod feet that can be rigged at any angle required to provide support and stability.

See sliders in action, along with Cinevate’s amusing small camera stabilizer, in a short video clip. 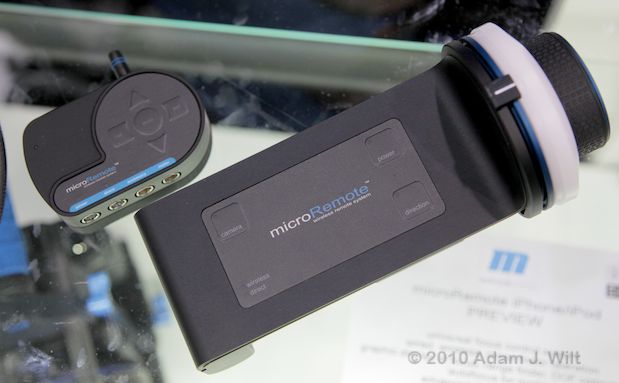 Redrock Micro, makers of relay lens rigs and cheap-and-cheerful camera support kits, are moving upscale with a wireless remote follow-focus system. The handheld controller will cable directly to a lens motor for under $1000, or it can go wireless with the receiver shown. 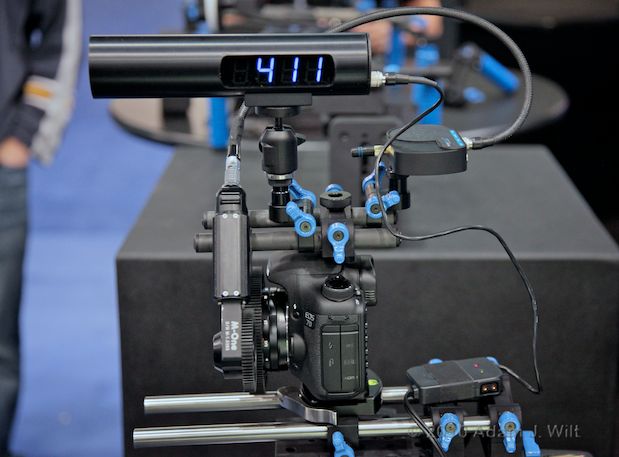 The microTape ultrasonic rangefinder, about $500, is part of the system. It reads out the distance to its target in big, friendly blue numbers. Consider that the industry-standard Cine Tape system is around $8000; if Redrock’s microTape proves to be reliable, it’ll shake things up… I know I’ll want one the next time Art Adams has me pulling focus on the 85mm at T1.9!

Now how much would you pay? But wait, there’s more…

Plop an iPhone or iPod Touch into the handheld controller, and you get a graphical display of your current focus point (black arrowhead), where the microTape thinks you should be focused (red arrowhead), and your depth of field (blue arc). Push a button, and the microTape will even drive the lens in autofocus mode… if you trust it!

Redrock Micro’s Brian Valenti shows off the system in this short video.