Catching up with friends, seeing practical applications, and some sad news. 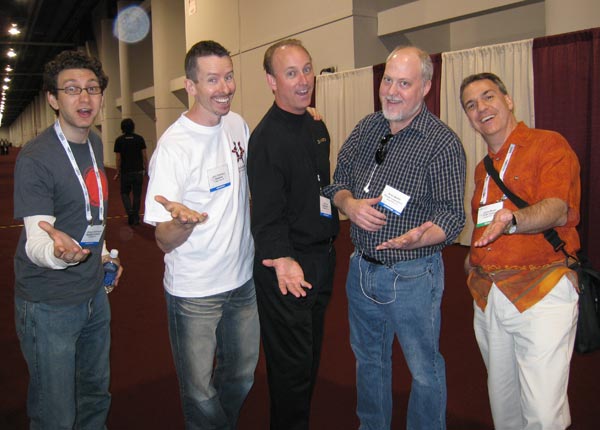 NAB this year is certainly a cross between the best of times (catching up with friends and seeing cool new toys) and the worst of times (the horrendous economy casting a pall around the halls). We’ve been in Las Vegas since Friday night, and teaching a few sessions at the Post Production World conference in the North Hall. So it was nice to finish up our sessions Monday morning and hit the show floor. Word has it that attendance is down from 107,000 last year to just 80,000 this year. You can tell its down because you don’t need binoculars to see Peder Norbby demo Particular 2 at the Red Giant booth in the Plug-in Pavilion (more on that, and other plug-ins, tomorrow). But first, what we saw and heard on Monday:

First stop was the Adobe booth, where we found out we just missed the noon session on technology sneak peaks, including automated rotoscoping technology, and their new scriptwriting tool Adobe Story (more information available on Adobe Labs). Currently Adobe is focusing on its integration with their live capture application OnLocation, but Brian Maffitt of Total Training was musing on the potential of its integration with other programs in the Adobe Creative Suite through the use of XMP Metadata, speech to text (to reference captures back to the script), etc.

Maxon has a terrific line-up of speakers breaking down their Cinema 4D projects, most of which include healthy dollops of MoGraph module and much integration with After Effects for the final compositing. Hats off to Maxon for being enlightened enough not to focus on big-budget special effects, but on fast turnaround, high-impact motion graphics for broadcast and similar applications.

Rob Garrett showed using MoGraph’s Cloner to clone cars racing along an urban speedway for Speed TV. John Lepore of Perception walked through how they quickly produce stills and short 3D animations in Cinema 4D and Photoshop to pitch jobs to clients (many pitches seemed to go their way) and then showed off a fabulous “spiderweb” promo they just completed for the Showtime program Weeds. 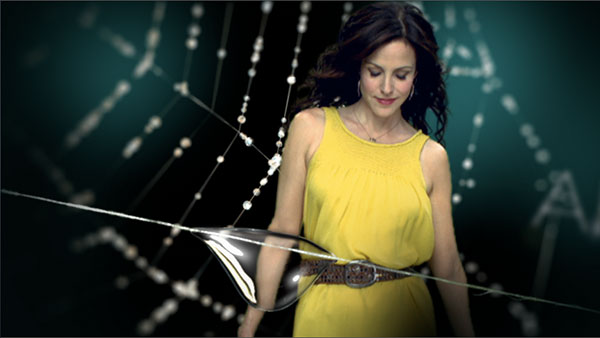 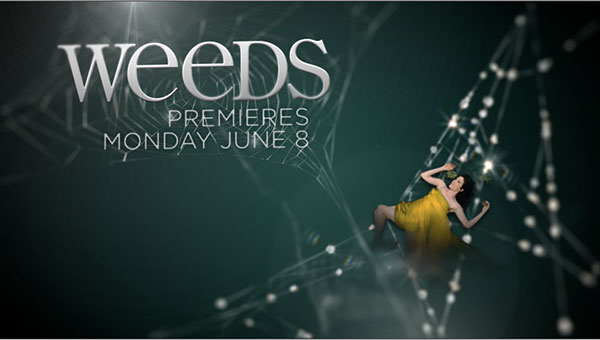 As soon as you think you really should get up and see more of the show, another great presentation starts at the Maxon booth (good job Starbucks was right next door for afternoon tea…). Next up was Josh Sahley of Monkeyhead who broke down the Big Tune spot they did for Red Bull: inside a black and white world, a great big audio cable snakes from one city to another promoting a national DJ contest. Great fun, and all done on an insane deadline of a week and a half. 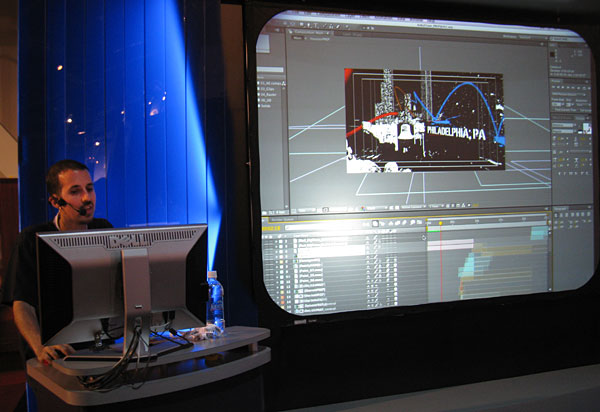 Flying through a landscape of stylized 2D and 3D buildings in Cinema 4D.

Mark Ciglar of Cinevative wrapped up the afternoon with a spot they did for Ahmanson Theatre. We heard a now-familiar theme: “we used to be After Effects artists but started using Cinema and now nearly all our jobs use a combination of both.” Most of Cinevative projects consist of promos for events that haven’t happened yet (meaning, there is limited source material and you really have to get creative with just a few graphics). 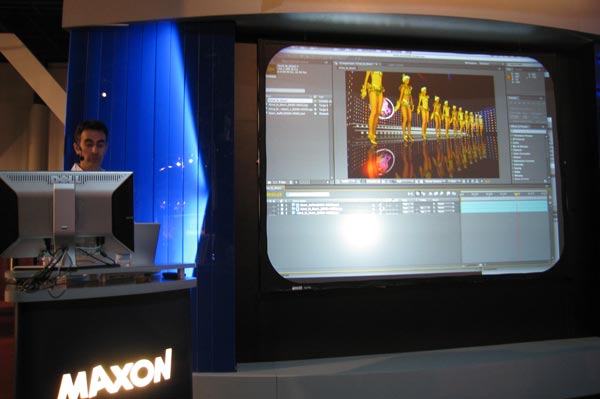 To promote an upcoming show for Ahmanson Theatre, Cinevative shot a couple of dancers against green screen, keyed them out in After Effects, and then used them as texture maps on planes inside Cinema to create a line of dancers (above pic). By assigning the dancers to an object buffer, they could automatically render a track matte for just the dancing girls which was used to isolate them later to color correct in After Effects (below). 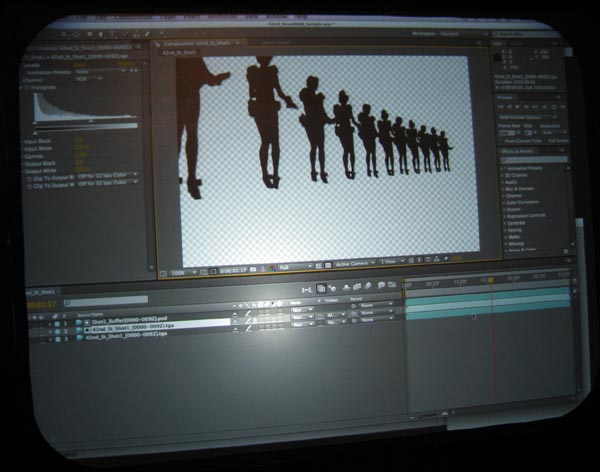 If we learnt one thing from watching Cinema demos is that everyone uses MoGraph, particularly the Cloner module (see pic). Do not leave home without it… And speaking of learning Cinema, we were particularly excited to hear from John Dickinson of Motionworks about a new edition of Making It Look Great that he is creating with Tim Clapham on Design and Production Techniques for Cinema 4D and After Effects. 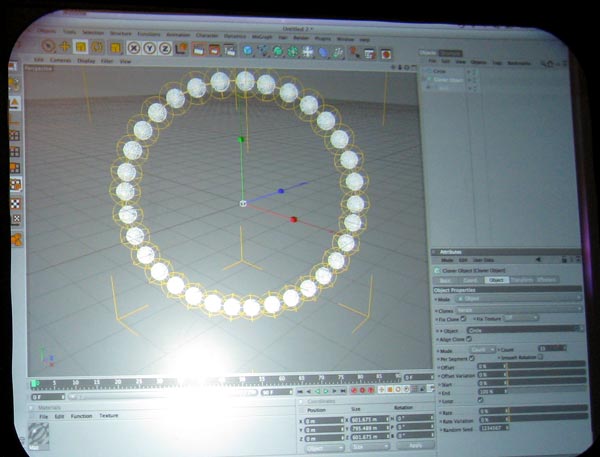 Cinema’s MoGraph module is an essential add-on for motion graphics artists. Almost every project discussed used the Cloner in some capacity. Here Mark Ciglar show turning a single sphere into a circle of Broadway lights (inside each sphere was a volumetric light to make it glow).

If it sounds like we spent the whole afternoon at the Maxon booth, that’s because we did. It’s not often you catch studios not only breaking down cool projects, but actually teaching you some cool tips and tricks as well. According to Maxon, they get a few calls a week from employers looking for After Effects/Cinema artists, so if you’re looking for a growth market, this is it. (Maxon USA grew 18% last year, and worldwide have 80,000 users.)

As the day wrapped up, we headed over to the Media Motion Cafe at a local bar on Tropicana, where we caught up with all those people you only ever meet in Vegas during NAB. There’s chatter about what the future of NAB will be for software geeks like us, because so many vendors are not here this year (Apple, Artbeats, Avid, and more). If you’re buying a camera or other chunk of hardware that needs to be held and examined, a show like this is essential. For software, where you can download a trial version, we’re not so sure.

The night’s festivities were dampened by hearing the news that occasional PVC author and stalwart of the New York Final Cut Pro community Michael Vitti died suddenly early Monday morning while in Vegas for NAB. Although Michael passed away from natural causes (arterial sclerotic artery disease), it did turn several conversations toward the topic of taking care of yourself and ensuring that you maintain a good quality of life in the middle of our busy careers and this wretched economy. Although he may have given the outward appearance of just a typical hyperactive New Yorker, once you got to know him you realized Michael was actually a very humble, caring individual who gave back a lot to the community. He will be missed.