Over my many years of editing I’ve searched high and low for different types of input devices that might provide an easier, faster and better editing experience. There’s been no shortage of options that I’ve tried as many of those now litter my closet. One of the most unique has to be the Contour RollerMouse. It’s not a mouse or a trackball but rather a funky sliding thing that is a different experience altogether when it comes to working your computer. But is it good for editing? 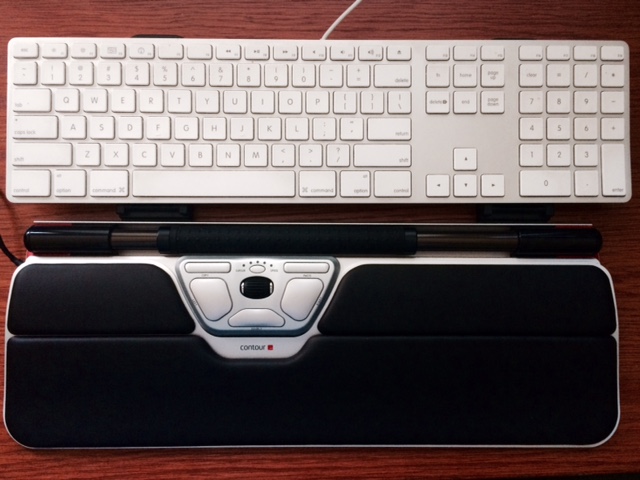 The RollerMouse works well with the thin Apple extended keyboard. Add the risers to raise the keyboard and it’s comfortable to type with the RollerMouse in front.

Over my many years of editing I’ve searched high and low for different types of input devices that might provide an easier, faster and better editing experience. There’s been no shortage of options that I’ve tried as many of those now litter my closet. One of the most unique has to be the Contour RollerMouse. It’s not a mouse or a trackball but rather a funky sliding thing that is a different experience altogether when it comes to working your computer. But is it good for editing?

You might recognize the name Contour Design as they make the Shuttle Pro, one of the editing world’s favorite hardware peripherals. The RollerMouse is something different entirely. It’s a control surface that runs the length of your keyboard and sits just in front of it. While it has all the usual buttons you’d expect from a computer mousing mechanism ( left-click, right-click, scroll wheel) it’s the mousing bar that makes this thing unique. There’s a 7 inch long rubber cylinder built into the device that rolls up and down. It also slides left to right and it’s the combination of those two axes that moves the computer cursor just like a mouse. It’s unique for sure. 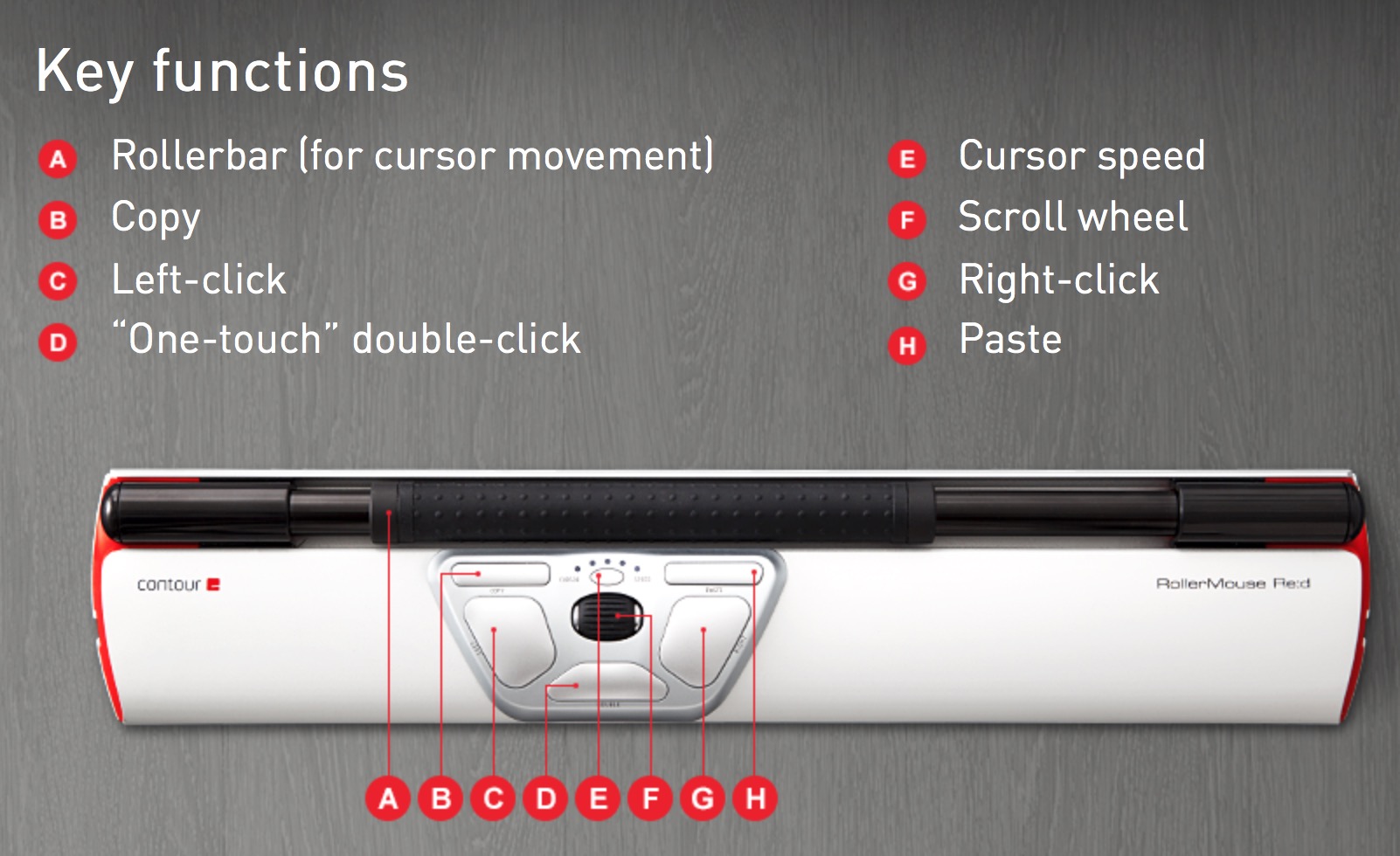 There’s several different RollerMouse products depending on what you might want. This comparison chart is a good place to begin when looking at the different features. Prices range from $200 for the RollerMouse Pro 2 up to $265 for the RollerMouse Red. That might seem steep for something that is essentially a replacement for a $50 mouse but once you use a RollerMouse you can see it is a quality build with metal used in the construction. The optics and lasers that makes the tracking work does cost a bit more than an optical mouse tracker I would presume. 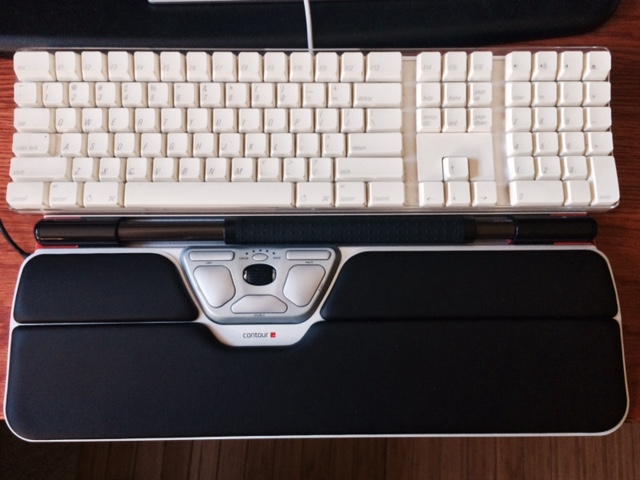 Above is the RollerMouse with the keyboard risers removed and an older, bigger Apple keyboard. 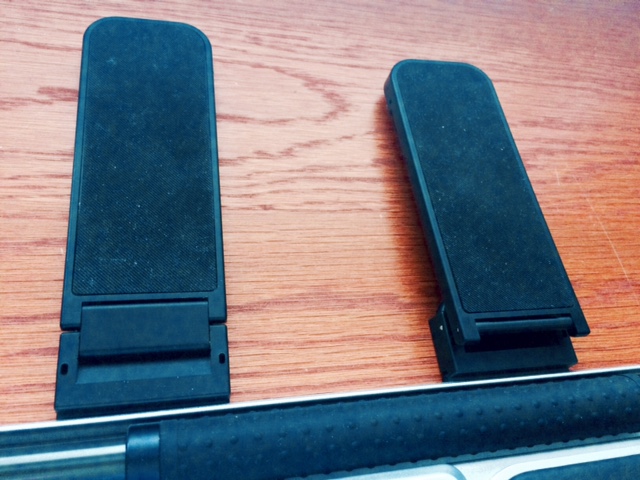 The risers can be adjusted to different heights to accommodate different keyboard designs and I found it easy to adjust for a standard Apple extended keyboard.

The many different buttons means the RollerMouse can perform a lot of functors beyond a standard mouse.

Extra buttons? The RollerMouse has them. The thing at the top is the roller thingy.

There’s a scroll wheel in the middle that can scroll up and down as many mouse scroll buttons do. You can press that scroll wheel down for a button as well. The default on that is the Mac application switcher, at least it was on one of the two machines I tested the RollerMouse on. I’m not sure what that would be on a PC. The actual roller bar can also be pressed for a primary mouse click meaning you don’t have to use one of the other buttons. I found that it took too little force to click the roller bar but that can be adjusted as there are a number of ways to adjust settings right on the RollerMouse. That mouse click on the roller bar makes it easy to perform click and drag operations as long as you don’t have to drag too far up or down. There is a DOUBLE click button but it was only performing a single click on one of my systems while it was a double click on the other. I was running two different MacOS versions but both are supported A driver isn’t required for the RollerMouse and there is a Mac-mode that can be turned on via the keyboard. Read the instructions for more. 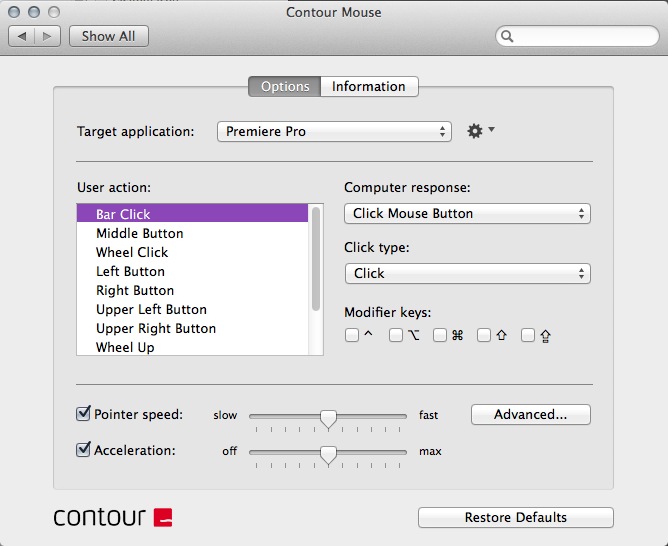 While a driver isn’t required the Contour Mouse software can add a lot more functionality to the RollerMouse as it is very customizable. You could even make application specific key settings for the RollerMouse.

But how is the RollerMouse to edit with?

Since the RollerMouse can perform anything that a mouse can do it is entirely possible to edit with the thing. You have to readjust your thinking a bit but it is doable. I liked the extra buttons as there’s always something useful they can do in an NLE. I found the smoothness with which the roller mechanism works quite pleasing to use while skimming in Final Cut Pro X. Editors talk about saving time by not having to reach for the mouse thought certain times a mouse is required in the NLE. There’s a lot less reaching that has to be done with the RollerMouse as the mouse is almost right at your fingertips.

Ultimately the RollerMouse suffered from the same problem that all the other mouse-replacement peripherals that I’ve tried over the years: It just isn’t any better or faster than a regular old mouse when editing for long periods of time. And yes I’ve tried a pen and tablet too. It might be force of habit and hard to change my ways but it still doesn’t “beat” using a mouse as my first choice and a trackball as my second choice. I could see using the RollerMouse in place of a traditional mouse for basic word processor tasks and web surfing. In fact I did just that way more than I did while editing. I think if you want to give the RollerMouse a try you’ll give it a better chance by disconnecting your old mouse and putting it aside. That would give the RollerMouse the most fair shot. And with the no risk RollerMouse trial program you can do just that.

Overall, the RollerMouse was a pleasure to use. This different type of input device is well built, makes perfect sense in how it works mechanically and is easy to use instead of a regular mouse while editing. I just don’t think it’s better.