Autodesk has announced a major update to its flagship 3D digital content creation package. If you’re not using Maya, its newly found motion graphics legs may give you reason. If you are using a previous version, mental ray’s departure may leave you crying.

In recent years the 3D digital content creation market has increasingly split in three: 3D Studio Max for game design and arch viz, Maya for feature film and VFX work, and Cinema 4D for motion graphics and broadcast work. (Now before you litter the comments section let me state up front that this is a gross oversimplification of the market and ignores many other great 3D apps.)

But Autodesk seems to be making efforts to court the mograph crowd lately with the features it’s been adding to Maya. It began with a point release update at NAB and moves into full swing with this 2017 release. Added to that, the monthly rental scheme–while over time much more favorable to Autodesk than the end user’s wallet–makes the up-front cost of using Maya significantly lower.

Now the downside to Maya is its complexity. Autodesk has made significant strides to simplify the interface over the last few years, but let’s face it: at its core it’s an enterprise app designed for large studio pipelines. Having said that, the sheer volume of features–the new motion graphics tools, character animation, small and large body liquid simulations, cloth simulations…the list goes on (and on)–makes it worthwhile for any boutique post house if you’re willing to invest the time in tackling the learning curve.

The motion graphics tools recently introduced to Maya were originally a plugin called MASH acquired from post house Mainframe. It’s a suite of tools designed to 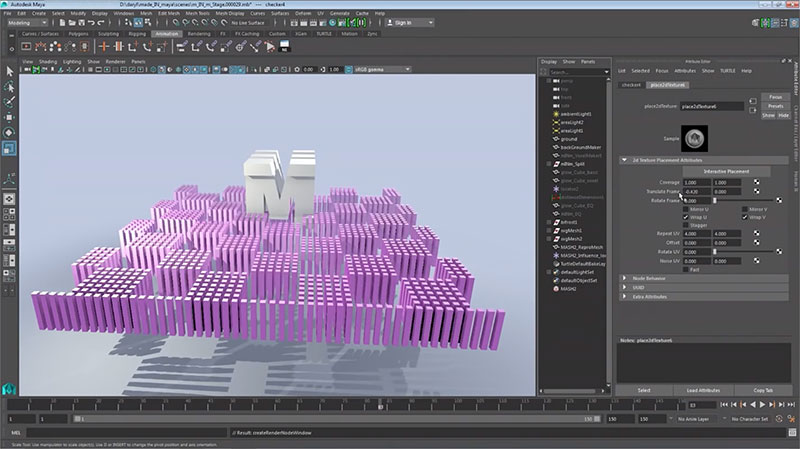 So while a motion graphics artist new to Maya may find “all of Maya” intimidating, they could probably get up and running with what they need for the MASH mograph tools in around an hour of helpful instruction by an initiated Maya artist.

We’ll look at a few other new features in a moment, but let’s talk first about the most controversial change: the jettisoning of mental ray–the previous default rendering engine–in favor of Autodesk’s recent acquisition, Arnold. Arnold is a powerful rendering system and one of Hollywood’s favorite ways to render 3D images.

On the face of it, this seems like great news for everyone. But it has actually caused a lot of upset on the interwebs–partly due to misinformation.

The initial release of Maya documentation suggests that the new Arnold renderer can only render animations with a watermark, and this has been widely reported. This is, in fact, incorrect. The conventional “batch” render system will not render using Arnold out of the box, but Autodesk has added a new animation render system distinct to the old batch system. This means you use a standard license of Maya to render your animation within the Maya GUI, but you are unable to batch render as a background process or on network machines, without paying for additional licenses.

To me this seems like a reasonable compromise: most boutique studios are used to their 3D DCC license being tied up while rendering anyway. With the clear move toward cloud-based rendering, this becomes less of an issue, since you could potentially rent additional Arnold licenses for the exact window of time you need them for rendering.

Arnold may not be much of a consolation to Maya artists who are heavily invested in the mental ray ecosystem. The good news is that Nvidia has taken on the role of selling licenses to Maya customers. And that’s not the only change: They’ve also accelerated mental ray by doing what they do best: pushing a healthy portion of its processing to the GPU. According to the engineers, a 20X increase in render speed is typical for many scenes (depending of course on how powerful your graphics card is).

So yes, if you’re connected at the hip to mental ray as your renderer of choice, you’ll have to cough up for an additional license. But you’ll see a dramatic speed increase with that as well, including the ability to work with mental ray in standard views in a similar fashion to the native Hardware 2.0 renderer.

And remember: if you’re an existing user, you still have access to Maya 2016, which includes a complimentary mental ray license.

What else is new?

Maya 2017 is actually a significant release in a number of other areas. A lot of effort seems to be going into modernizing aging interfaces–always a good thing. Modern window docking behavior and the use of workspaces (things we’re used to in other applications like those in the Adobe suite) are now available in Maya. 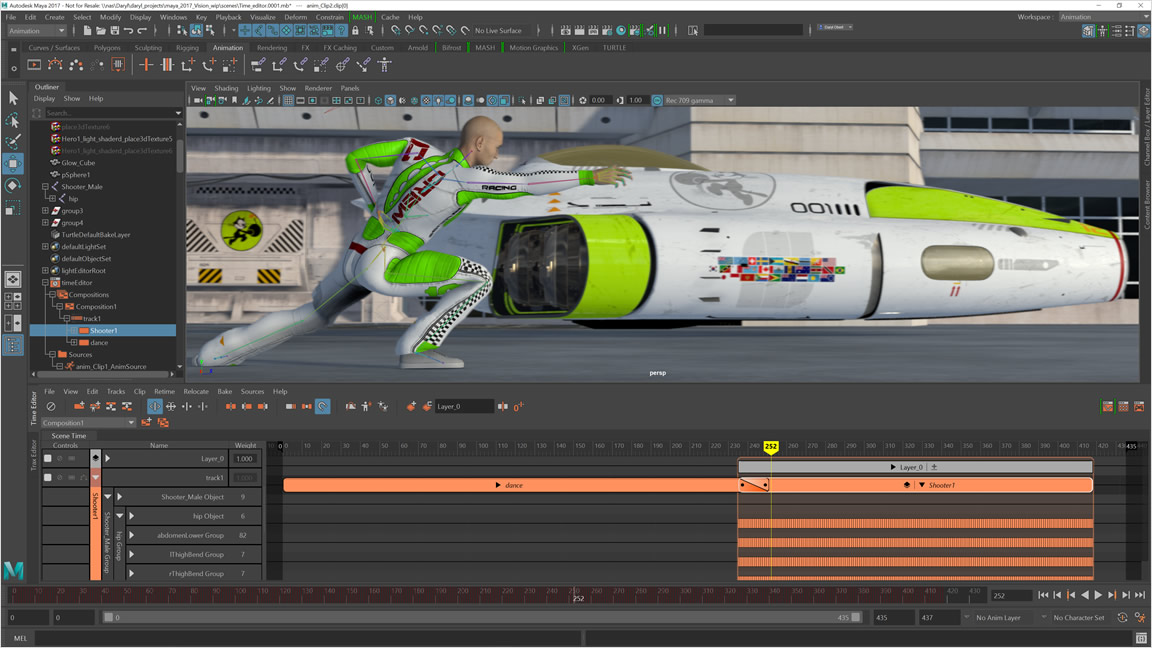 Possibly the most impressive new feature is the non-linear Time Editor. This behaves just like a standard NLE, complete with dissolves. The Maya team took a crack at this a few years ago with the Trax editor. This new incarnation is much more polished and allows you to mess with the time of any keyable attribute in Maya.

The curve editor–a constant source of confusion to users coming from other applications (‘why can’t I just select the points and move them around?’)–has received a complete overhaul and seems much more intuitive. Don’t worry: the legacy editor is still available for those who fear change.

Introduced with the NAB release but fleshed out in Maya 2017 is the new render setup system, replacing the previous and somewhat clunky render layers. This is a welcome relief for multiple passes and AOV renders.

hard enough time controlling our hair in the real world, let alone virtually). Maya 2017 brings interactive groom splines to help artists get hair to where it needs to be. Using a paint brush-style UI, you can very quickly groom a character’s hair. The interface
seems very well thought out and is extremely effective, at least in the instructional video.

There are dozens of other new features, but I’ll touch on just one more: the already-renowned Bifröst fluid dynamics simulation engine has received a new Ocean Simulation System, AKA “BOSS”. The sample animations look world class and would be more than suitable for feature-level effects work.

So before you commit to a life spent in Cinema 4D, take a look at the Maya 2017 mograph sizzle reel and consider which is the best fit for the work you’re doing.

Maya 2017 is available for download now. A full license of Maya can be rented month-to-month at a rate of $185, although if you’re willing to pay for one, two or three years up front, that averages out to $122, $116, or $110 per month respectively. A cut down version for the game developers market is also available (but
lacks many of the more whiz bang features, including the mograph tool set).