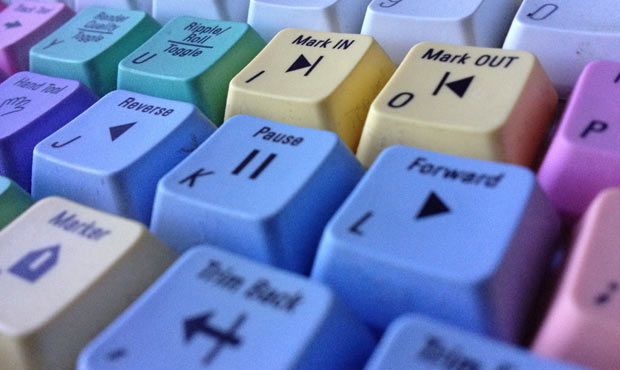 With so many people looking for an NLE to replace FCP7, it’s natural that people are turning to Avid.

I’ve moved between editing systems often, and I can relate to the apprehension and frustration of moving to a new NLE. I often describe this process like learning a new language: you already know how to communicate, but now you need to do it with new words and new grammar.

To help with the process, I’ve created an FCP to MC dictionary. Well, it’s really more of a wordy, technical thesaurus.

To start, let’s translate the commands on the FCP keyboard. I could start with the F1 key in the top left and work down to the “?” key at the bottom right, but instead we’ll go through them in rough order of importance.

If you want to edit, you’ve got to be able to play your footage and mark ins and outs. Luckily, FCP and Avid see eye to eye on this, so the JKL keys on Avid and FCP work identically. Double or triple tap the J or L keys for double and triple speed playback (J for backwards, L for forwards). Similarly, the FCP and Media Composer functionality for the space bar is to toggle between play and pause.

Avid actually shows the playback speed in frames per second on the play button under the Source or Record menu, which is helpful. Assuming 30fps playback, Avid plays back at 30fps, 60fps, 90fps and 150fps. At 150fps, sound playback is dropped. Like FCP, using the K key together with the J or L key “scrubs” the playback at approximately 1/4 speed (8fps).

Marking Ins and Outs is also identical for the basic Mark In and Mark Out using the I and O keys. The differences come when using modifier keys. FCP conveniently uses option I and option O to delete those points. In Media Composer, to Clear a Mark In or a Mark Out, there are specific keyboard keys to do this instead of modifiers: the D (Clear Mark In) and F (Clear Mark Out) keys.

If memorizing these new keys for Clear In and Out will frustrate you, it’s easy to remap the keys to something close to what you’re used to. Custom mapping keys using the option modifier is not allowed in Avid, but you can custom map using the shift modifier. To map the shift-I and shift-O keys so that they clear the In and Out Marks, do the following: 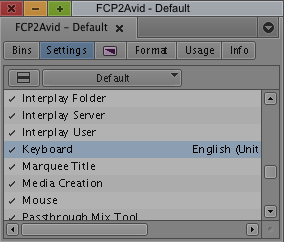 On a Mac, hit Command-3 or on a PC, hit Control-3 to call up the Command Palette. The Command Palette has all of the Avid commands in a series of tabs. These icons can be dragged onto any keyboard button in the Keyboard Setting or even onto the editing UI itself – under the Source and Record monitors or to the top of the Timeline. The Clear In and Clear Out buttons are in the Edit tab ?of the Command Palette.

Experiment with the new mapping. Hitting the I key should mark in In point and hitting shift-I should clear it.

The Zoom Tool in FCP is another important tool for navigating around the timeline and in other areas of the UI. The other way to Zoom in the timeline in FCP is to use the command-+ and command– keys. Avid has a similar functionality. To zoom in on the timeline, Avid uses command-] and to zoom out, command-[. These are essentially the keys directly below the same keys for FCP. In FCP, if you want to jump back to see a full view of your timeline from a zoomed position, you use shift-z. In Avid, to do this, you use command-/.

In the next article, we’ll cover the Avid equivalents for the Pen Tool; the Insert, Overwrite and Replace buttons; and the Extend Key.

Stephen Hullfish has been editing on Avid since 1992 and on FCP since 2002. He edited last year’s Sony/TriStar feature film, “Courageous” on FCP and worked for a decade as an Avid editor on “The Oprah Winfrey Show.”