YouTube as the new AP Wire Service. Except nobody gets paid. 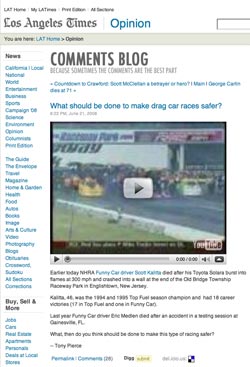 I’m still working out how I feel about this, so feel free to chime in with your own comments.

This past weekend, drag racer Scott Kalitta died in an accident while qualifying for the NHRA SuperNationals. The event was televised by ESPN.

I first learned about the tragedy while browsing the web site for the Los Angeles Times newspaper. In the initial version of the story, they didn’t have photos, but they did have a video of the accident.

It turns out that the video was an embedded clip from YouTube.

The interesting implication of this is that a news gathering source no longer needs to have staff on site, trade the story with a partner, or buy it from another news service; they can just link to a free service someone else has created.

Here’s where it gets more interesting: The video on YouTube was not posted by the NHRA or ESPN (the copyright holders of the clip); it was posted by a user who recorded it off of the air and posted it without permission. So not only did the LA Times get the crucial video for free, they were able to skirt copyright issues (or having to pay the NHRA or ESPN) – either by claiming Fair Use, or by letting YouTube bear the responsibility to sort out copyright ownership.

Interestingly, the video was demoted from the main story on the LA Times site to a blog entry – did they feel a pang of guilt? Or did they feel they didn’t need it after they licensed a more complete story from the AP?

Oh, and about that copyright: After 1+ million views, YouTube pulled the video due to a copyright claim from the NHRA:

Oh, and about the AP – they eventually posted their own verson of the story on YouTube, illustrated with panning stills:

(I wonder when the LA Times will take down the now-dead link to the illicit version of the video and link over to the AP story instead?)

You could shrug your shoulders, be outraged, or figure out how to make this work. The latter is far more interesting to me, as I’m always looking for the income potential in these things – it’s how we eat.

I’m one who applauds the addition of advertising and commerce to YouTube; I feel content creators or owners should be compensated if someone wants to view their content. The user who re-posted ESPN’s video shouldn’t get the money, but ESPN should. Indeed, I think they should have used their original version as – well, it would be crass to say advertisement, so let’s say public service – rather than yanking it. In their place, a number of users have posted their own videos of the tragic event.

No matter which side you come down on, it’s certainly another example of where creating the content isn’t the only game anymore; those ones who curate content are equally important (a long-held belief of mine). I’m just a bit surprised to see a major newspaper move from creator to curator so fast.