Burning Man has been part of my yearly existence for 12 years now.

As the event grew through the time I have first experienced it from a respectable 21,000 citizen of black rock city to a staggering 68,000 many things have changed and evolved.

The biggest thing that stayed was that this is still one of the most immersive multiplayer sandbox in the world.

To really try and explain this massive storyworld is quite hard for those who haven’t been.

It has everything from a music festival, biggest interactive museum in the world, playing field of the makers movement, yoga lessons, massages for all, food, drink, kink, lectures , startup deals and more.

One quote from the new burning man documentary “Spark” conveys a bit of what us, the residents of black rock city feel:

“The place is an idea. And that idea is that people have permission to be whomever they want to be…It’s so powerful and so alluring that people will go to the worst place in the world just to get a little taste of it”

But one of the things I love most about the event is its playfulness and focus on the parody and pastiche of the human existence.

One such installation this year took it to the next level. 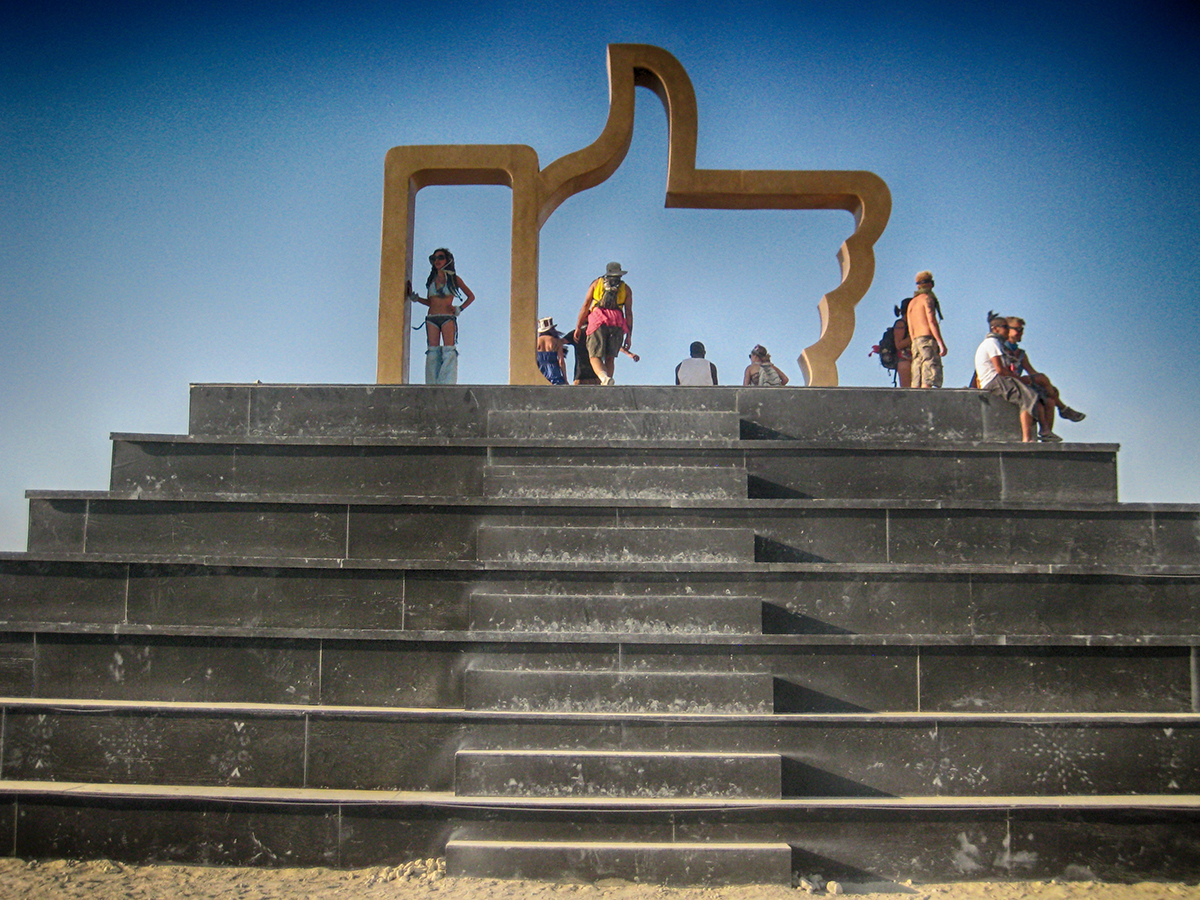 It was dusk when I first encounters one of the like4real monks.

He was dressed in the most amazing technicolor habit as you can see and was walking with a staff. 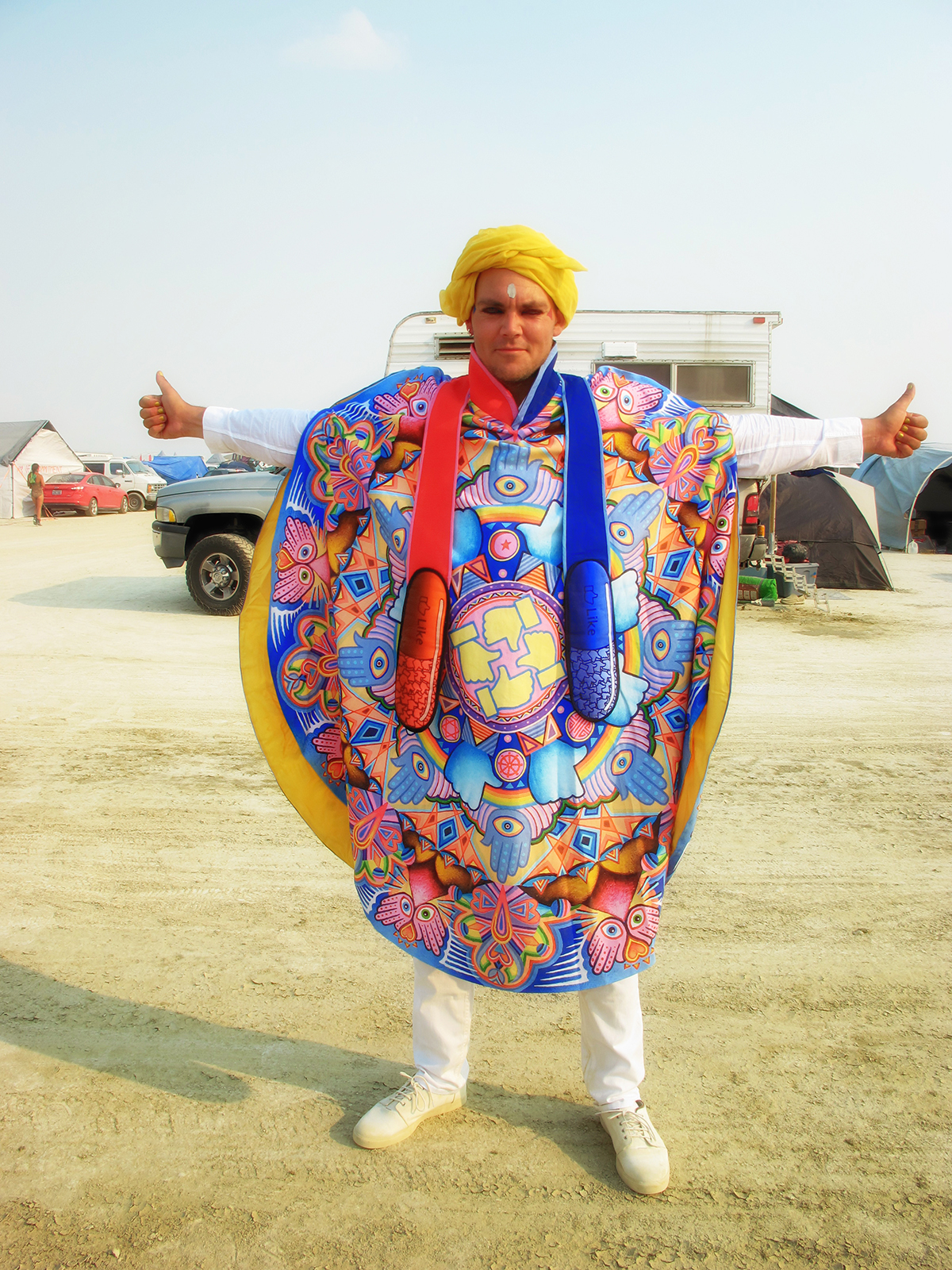 As I approached him he stuck his thumb upwards and mumbled: “likes4real, likes4real”

And the he said: “Join us and see if you can attain Enlikement…”

I definitely appreciated the full devotion these monks had to their calling and followed them to their temple.

A huge LIKE golden statue on top of a staircase pyramid – all made of wood.

In front of it stood a plaque explaining their Likefesto.

It explained in detail their whole manifesto – here is a quote from it:

“We as a society need to focus on real actions and intentions, rather than the symbolic reward bestowed by a mouse click”

With this installation they set out to really bring a different angle to our succumbing to the “like tyranny” and turned it on its head into the “golden calf” of our age. 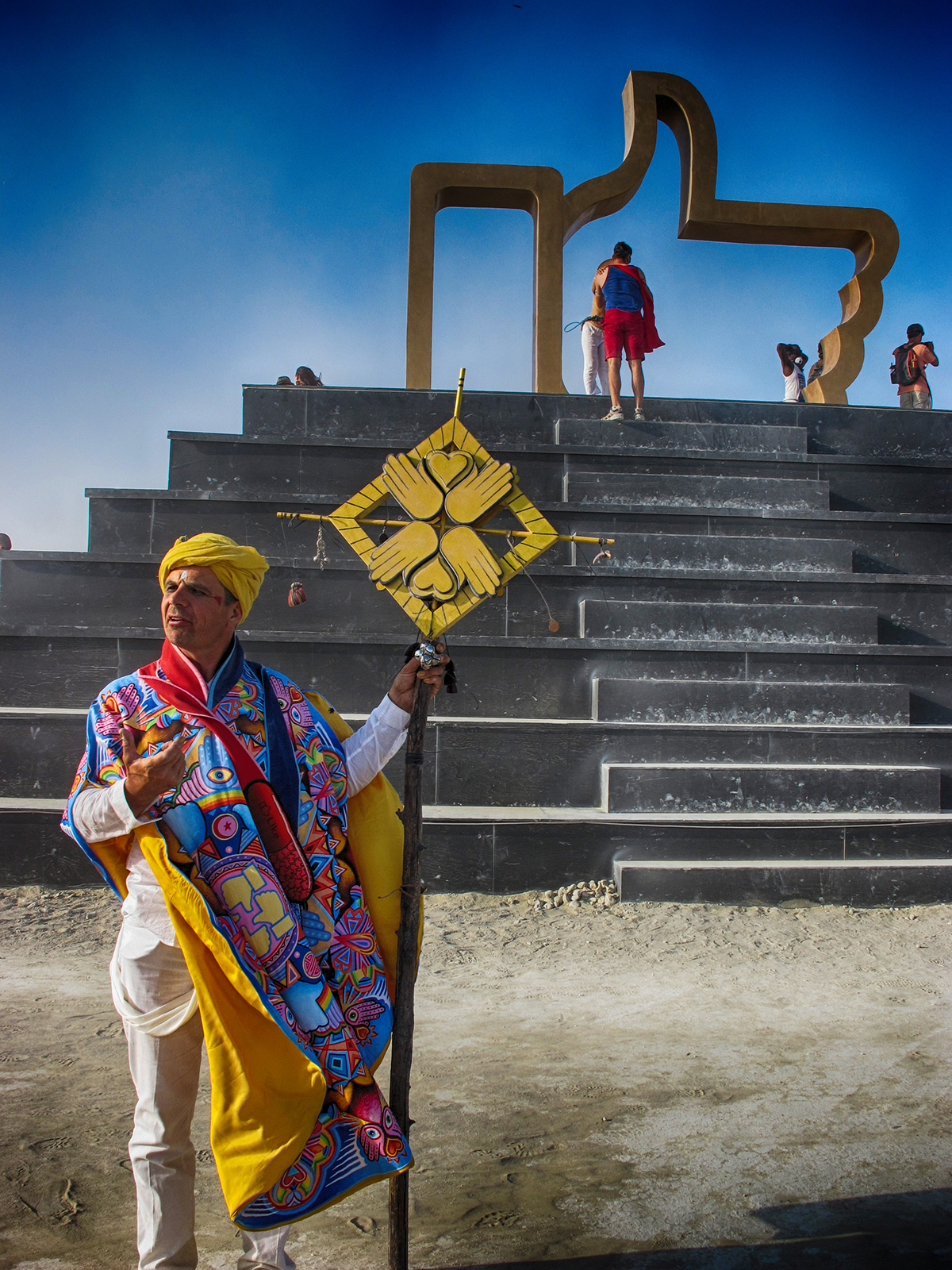 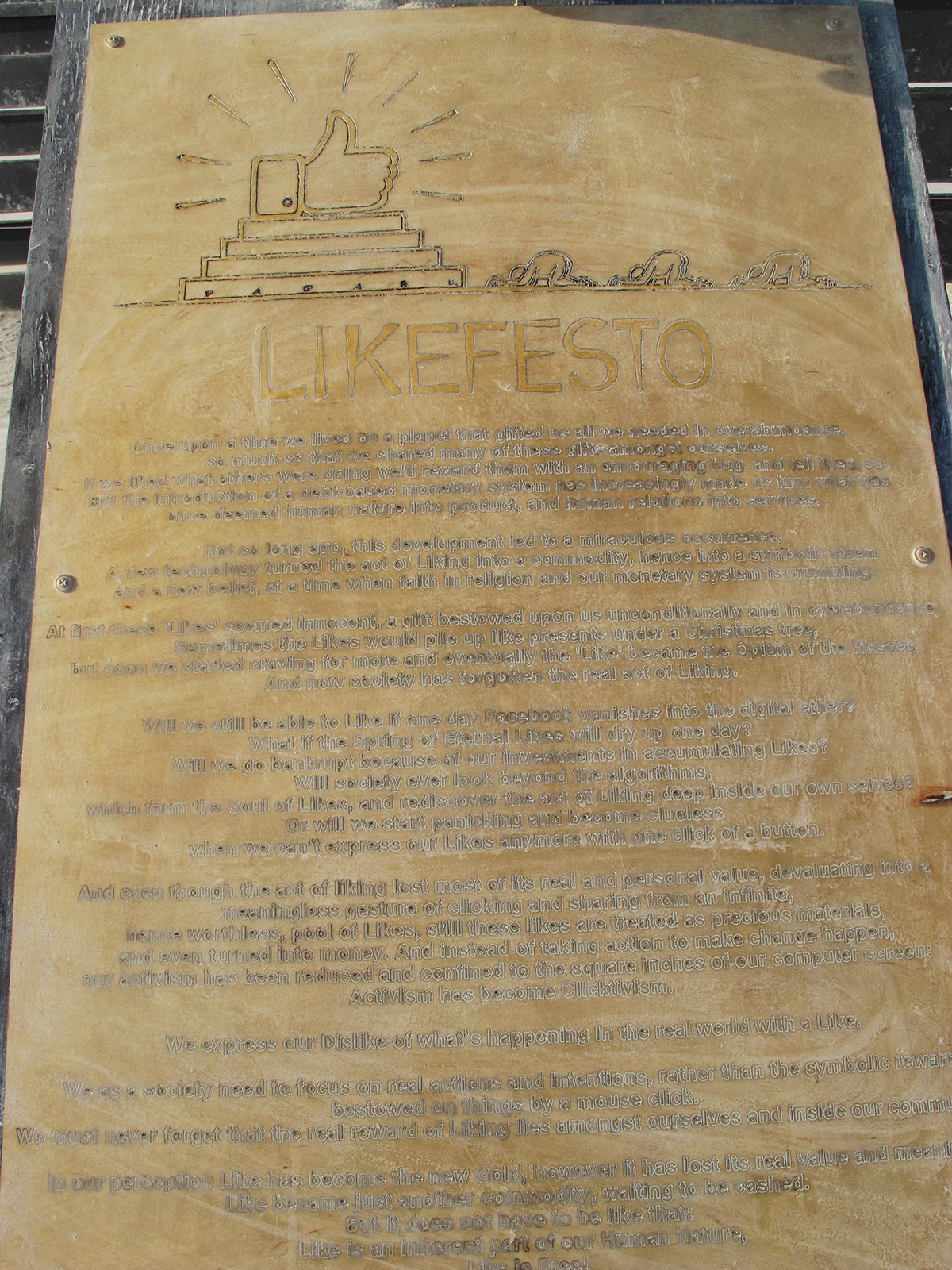 This installation was created by a group called Dadara out of Holland, who are veterans of the event and have created some other great burning man installations in the past.

The big LIKE burned on Friday night as a lot of burning man art installations do. 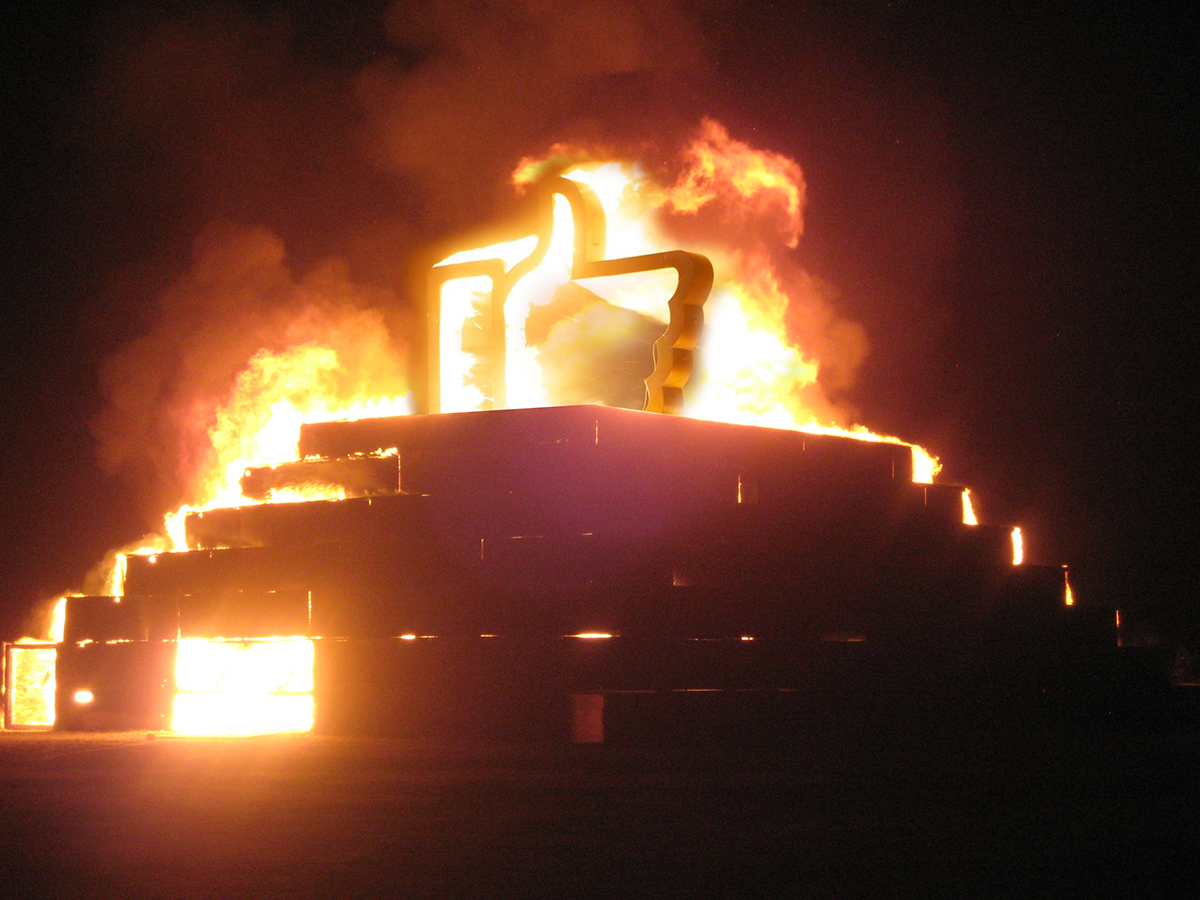 Upon my return from the desert I immersed myself in their storyworld.

The funny thing was – that most people didn’t understand how deep the rabbit hole goes….

In an article published a days after the event, was reflected that one of the

“rumors going around Burning Man was that Facebook employees, who do indeed attend the event en masse,

had erected the statue as a self-congratulatory homage to enjoy between trips to their air-conditioned luxury RVs.”

Most people are just not rabid fans who will dig deeper – that is definitely the lesson here.

immersed in social media (there is scarcely any wifi or reception out there…and I hope it stays that way…).

So people cannot get the information around as fast.

For those who did go down the rabbit hole – a completely different and rich experience awaited.

The great thing about the event is that this was just one experience of a multitude of an ever expanding storyworld.