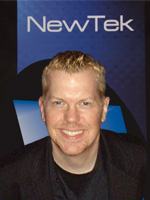 NewTek’s booth at SIGGRAPH 2010 in Los Angeles offered glimpses of a number of notable celebrities. Crowds gathered to see William Shatner and Dick van Dyke, snapping and sharing hurried cell-phone photos of the pair. Yet, it was not their celebrity that SIGGRAPH attendees were buzzing about at the show, but that of Rob Powers.

For those unfamiliar with Rob Powers, his IMDB page offers some insight into the breadth of his 3D and CG experience: http://www.imdb.com/name/nm0694610/. He is responsible for some of the most ground-breaking effects of the past 15 years, ranging from the dancing baby on “Ally McBeal” to the impressive environments and inventive species on Avatar’s Pandora.

When SIGGRAPH 2010 opened in August 2010, Powers had just been promoted from Director of Entertainment and Media Development to Vice President of 3D Development at NewTek, an accomplishment earned within just six short months.

The industry-including seasoned professionals, newcomers, hobbyists, and students-was both surprised and elated to hear that NewTek had put its LightWave 3D software in the hands of Powers, a renowned 3D artist and technical director, as well as a LightWave veteran of 20 years. Indeed, his mission was to shape LightWave as a 3D artist/technical director for 3D artists.

CG professionals anxiously awaited the next LightWave 3D version, anxious to witness Powers’ influence over the software’s feature set, user interface, and workflow. The wait is over: LightWave 10 is now available.

LightWave 10 “underscores NewTek’s ongoing commitment to advance the technology for its 3D customers,” says a spokesperson. Power’s influence is evident in the features and functionality new to LightWave version 10. Many feared that Powers might subject LightWave 3D to a “complete overhaul.” Such fears should be allayed; Powers, having used LightWave for two decades, is respectful of the software tool and its legacy. Version 10 is an upgrade in the truest sense: It adds more features and functionality to LightWave’s pre-existing tool set. 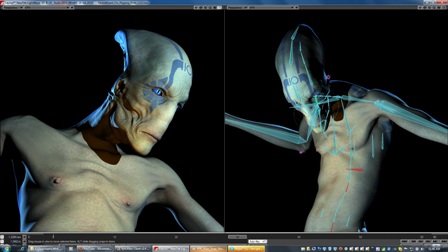 New stereoscopic features in LightWave 10 include :
• Parallel (offset) and convergent stereoscopic (toe-in) camera rigs
• A real-time Anaglyph Stereocopic Preview in an OpenGL window
• An OpenGL camera and convergent point items in OpenGL
• Dynamic eye separation (interocular) and convergent point (zero parallax) values for animated changes within the shot
• Render support for right- and left-eye stereo for output to virtually any format
• An Anaglyph Render Filter integrated into the Camera Panel

Upgraded and new features are not limited to stereoscopy, however. The graphical user interface (GUI) has been updated and modernized. Version 10 also adds support for: new data interchange tools and formats, an expanded linear color space workflow, and such virtual studio tools as InterSense’s Virtual Camera Tracking System (VCAM) and 3Dconnexion’s 3D mouse.

“Our goal with LightWave 10 is to deliver workflows that best serve the artist and support their creative discovery process, allowing them to interact with their 3D content like never before,” says Powers. “Technology should serve the artist, and not the other way around.”

NewTek and Powers encourage you to try out LightWave 10. A free, 30-day trial version is available for download from: http://www.newtek.com/lightwave/lwtrial.php.