The art of the live concert video has evolved over the years alongside technology, from film cameras on tripods with the occasional crane, to a cameraman with a “Steadicam” rig roving in the shadows, to the use of camcorders and Go-Pro cameras on stage – sometimes even in the hands of the musicians themselves. The overall progression has been to provide an increasingly more intimate view of a performance, as well as adding movement to amplify the feeling of excitement – sometimes maniacally so.

However, this progression has not come without a cost. As David Singleton of King Crimson’s label Discipline Global Mobile (DGM) shares, “The presence of cameras and cameramen introduces a fourth intrusive element into the relationship between the artist, the music and the audience. It is therefore something of a truism in the history of Crimson that any show that is filmed will not be one where heaven meets earth and the angels descend.”

Therefore, for the “Radical Action to Unseat the Hold of Monkey Mind” tour of King Crimson’s new seven-man lineup, the decision was to record every night of the tour with a series of discreetly hidden cameras under the control of a single off-stage camera operator – Trevor Wilkins of Stage and Studio Services Ltd. – to “intrude on neither the artist or the audience,” according to Singleton.

Wilkins was given a set of apparently contradictory marching orders: King Crimson band leader and DGM partner Robert Fripp “wanted no close-ups, and to keep three or four people in shot at all times – preferably long shots with everyone in,” as Wilkins recalls; “Just a single camera at FOH (front-of-house) mix position would be fine for him.” Meanwhile, Singleton told Wilkins that he wanted “lots of close-ups…especially solos – i.e. mainly Robert!”

The solution Wilkins hit upon was to use a set of nine cameras – some locked down, some on remote-controlled tilt and pan rigs; some with Wi-Fi control of their zoom; one on a tripod that Wilkins could manually operate from the side of the stage. He then collaged the result together in post – combining wide shots of the band with a series of overlapping shots that focused on the interplay between the musicians – without resorting to distracting cuts, pans, or artificially-induced excitement. Before we discuss how he pulled this off, watch the closing number from the concert – “Starless” – which has already garnered well over 1.2 million views on YouTube:

Originally, there were no plans to release an official concert video; there was just a desire to archive the performances. Therefore, Trevor assembled a collection of mostly low-end cameras that both he and Robert already owned, supplemented with a couple of additional cameras plus some Hague remote controlled pan/tilt heads. Here’s how they were deployed:

Trevor ran all of these from a control area that included the HDC-MDF1, a pair of iPads, a Samsung S5, and the wired remotes for the Hague pan/tilt heads in the wings. The iPads controlled the zoom for those HC-V550s in the wings as well as the HC-V750 in the FOH position, while monitoring their Wi-Fi video feeds. The S5 controlled the GoPro 3, as well as the Bluetooth pan/tilt on the remaining HC-V550 as well as its video feed. (Oh, and he was also responsible for running the 64-track JoeCo audio recorder used to capture sound for every gig, which included 42 inputs for the three drummers alone. There was also a Zoom audio recorder used to capture reference sound.) 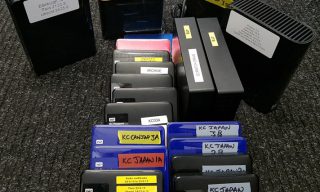 After every gig, Wilkins backed up all of the high-speed Sandisk camera cards plus the audio recorders in duplicate to a set of WD Passport portable USB3 drives. In all, he needed over 40 terabytes of storage to capture the entire tour, times two. The JoeCo recorder is a USB 2 device, so it took extra time to back up. Trevor paid special attention to careful naming and file structure, as again he was recording every single gig. All of the memory cards were reformatted on their host devices before recording the next night’s performance.

The nature of radio remote control of the camera zoom and pan was such that Trevor couldn’t just give them targets to move to and the cameras would move on their own; separate commands are issued to start and stop the movements. Things would work well during set-up and rehearsals, but after the audience came in with all of their own Wi-Fi and Bluetooth-enabled phones and tablets, the available bandwidth would be swamped and some commands would be lost, resulting in the cameras overshooting their intended marks. Adding a couple of dedicated Wi-Fi routers and searching for clear channels before the audience came in helped, but some shots were still compromised due to missed wireless commands.

On the vibration front, rock bands – especially those with three drummers – are loud, even if most of the musicians are using in-ear monitors. Occasionally subwoofers would also be positioned on stage. This results in lots of vibration, especially if the venue was already a bit on the rickety side. Isolating tripods with foam helped, but wasn’t a cure-all; on one of the “extras” tracks excluded from the main concert you can particularly see this in the camera used for lead singer Jakko Jakszyk. You can shrug this off when the video is “only” supposed to be used for the archives, but when discussion turned to potentially releasing a video to commemorate the tour, issues like these took on an additional edge.

Practice does help make perfect, however, and one of the final concerts of the tour in Takamatsu Japan was chosen as the template for the majority of the songs that appear on the Blu-ray.

The Edit; The Result

Wilkins freely volunteers that he’s primarily an audio rather than video guy (he’s also the tech for Robert Fripp’s complex guitar rig, as well as an expert in the Cakewalk SONAR digital audio workstation software), but when the conversation did inevitably turn to releasing a concert video, he agreed to take the edit on as he was intimately familiar with footage. You can see this sympathy for the material not just in the shot selection in post, but in little things like camera zooms during production that anticipate rather than react to an upcoming solo. The camera angles were also well chosen during production, especially for showing off the interaction between the drummers. 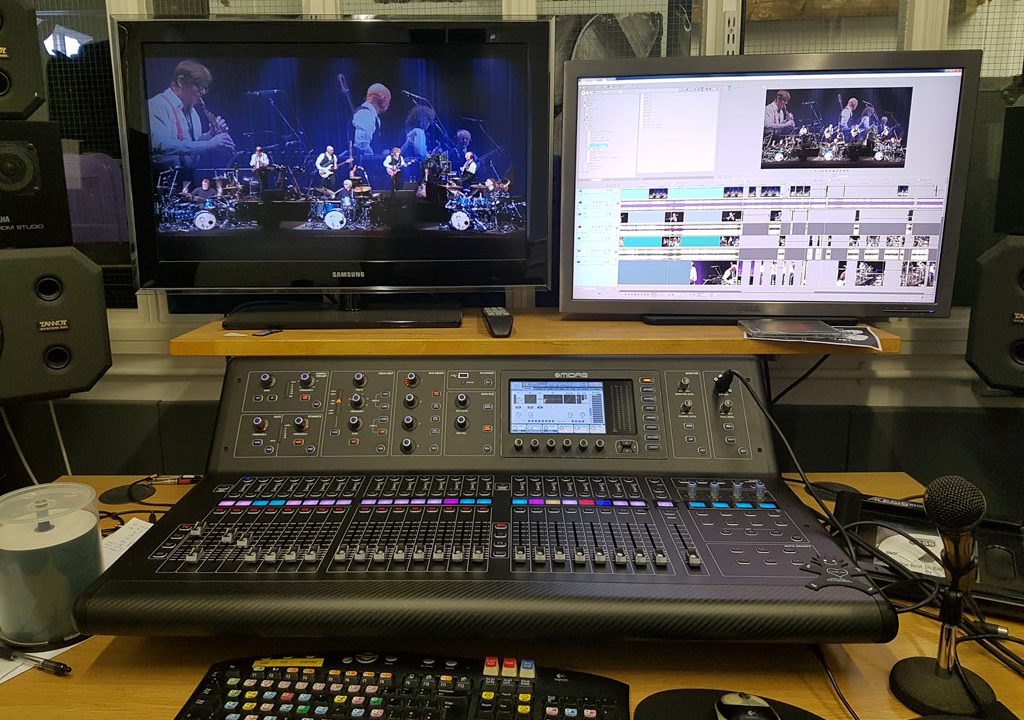 Trevor chose to use Sony Vegas Pro for the video edit, as he was already familiar with the software. Audio sync was performed manually, aligning transient spikes from the drummers near the start of each piece. Color matching was also done by eye; the majority of the cameras being of the same brand helped. There are certainly occasions where you can spot posterization due to the lower resolution of the HC-V550 wing cameras or the occasional poor black levels of the GoPro clones, but the end result looks far more cohesive than one could possibly imagine given the mixture of cameras used.

The FOH shot covering the entire band that Fripp originally requested for documentation purposes ended up being the anchor throughout the video, as it shows off the unusual configuration of the seven-piece ensemble with the three drummers as the “front line” and the remaining musicians placed above and behind them, contrary to standard rock practice of putting the lead singer and guitarist front and center. Wilkins then used additive overlays plus the Cookie Cutter mask in Vegas to carefully place the highlighted musicians in the “negative space” (less busy areas) between musicians in the wide FOH and wing shots. Some software pans and zooms were added in post to supplement those performed during the gigs, but in general, putting the focus on the intricacy of the instrumental parts rather than creating artificial excitement through excessive movement definitely added to the “class” quotient overall.

Trevor sums up the final concert disc by modestly noting “It was never intended to be the definitive concert film – and could never be so, because of the way it had to be done – but it is, I feel, a good view of a fantastic live performance that could not have been done any other way.” Chris will contradict him and say it’s perhaps the best concert video he’s personally seen (and he spends a lot of time on the treadmill, watching concerts and music documentaries), and is definitely one of his favorites overall. Sometimes thinking outside the box and bringing a fresh perspective can indeed result in a real breakthrough. Chris heartily recommends getting your own copy of the final four-disc set (three audio CDs plus the Blu-ray concert video), if you can find one; they’re currently on backorder from the DGM Live online shop – but it’s well worth the wait.

In the meantime, here’s one more video from the final result – a classic track called “Easy Money”:

In addition to running Stage and Studio Services Ltd., Trevor Wilkins also has written a pair of books, including “Access All Areas: A Real World Guide to Gigging and Touring” from Focal Press.