Announced as featuring the industry’s smallest 0.56-micrometer (μm)-pixel, the ISOCELL HP3 is the second 200MP image sensor from Samsung… as the first is yet to be seen in a real product.

Introduced as offering “Epic Resolution Beyond Pro”, the new ISOCELL HP3 has pixels 12% smaller – than the HP1 version – that can reduce camera module area by 20%, and promises more accurate and quicker autofocus.

On September 20, 2021, Samsung announced its ISOCELL HP1, the company’s first 200MP image sensor, with two words: Resolution Redefined. The ISOCELL HP1 was also presented as offering a big leap forward for mobile photography, thanks to its ultra-high resolution. Based on Samsung’s 0.64μm pixels and new pixel-binning technology, ChameleonCell, the ISOCELL HP1 is not yet available in any smartphone, although it is suggested that the next high-end models reaching the market will use it. 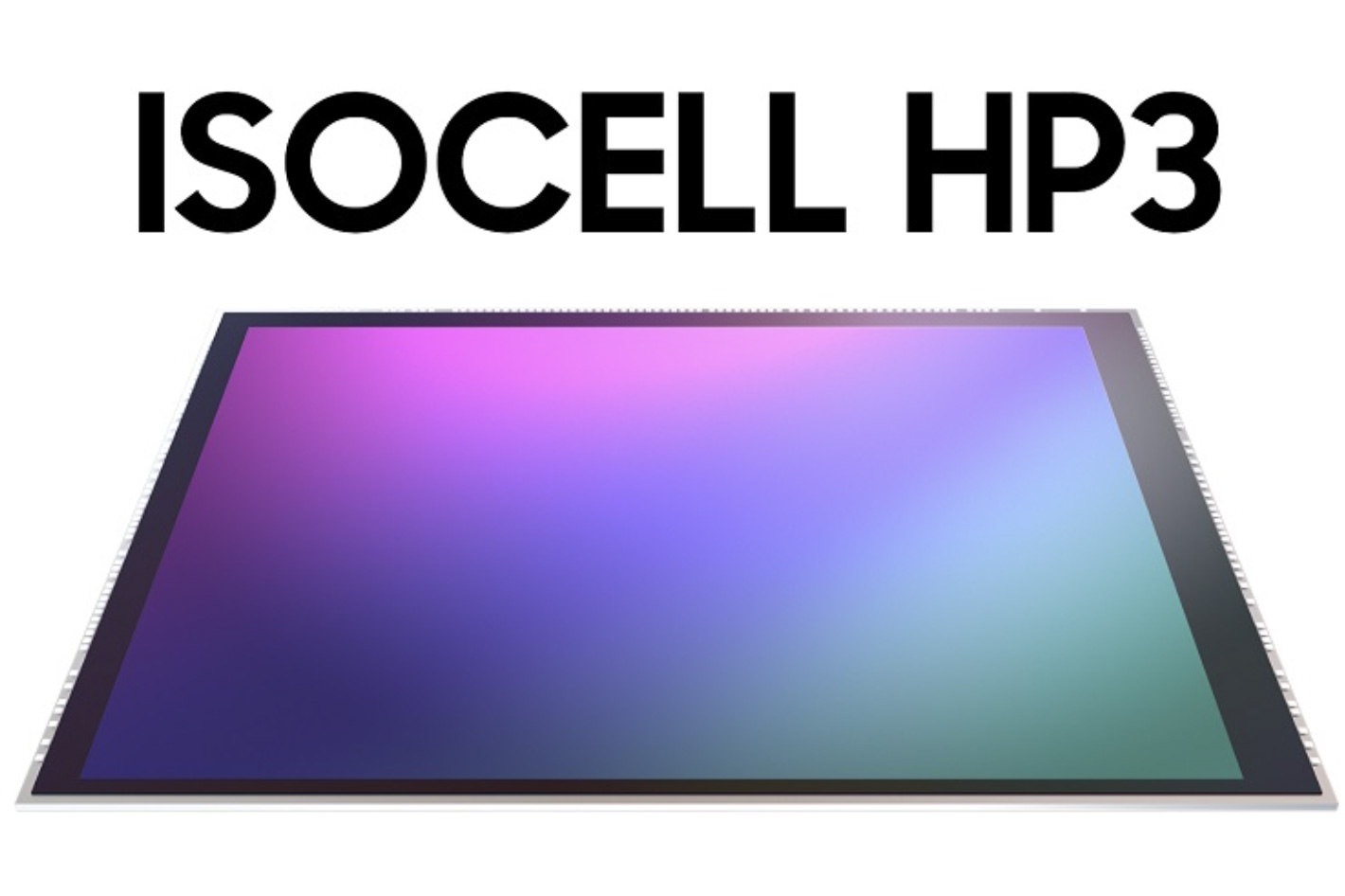 The Motorola Frontier smartphone, which will be launched in July, will probably use this sensor (the company mentions a 200MP sensor), and so will the Xiaomi 12 Ultra, a smartphone developed with Leica. Some also expect the Samsung Galaxy S 23 Ultra, to launch next year (… maybe!), to use the ISOCELL HP1, but now, with a new version, ISOCELL HP3, announced, only Samsung engineers will know for sure what’s best for a flagship smartphone.

Before we look at what the ISOCELL HP3 offers, it’s probably good to remember PVC readers that the ISOCELL HP1 won one of the 43 CES 2022 Innovation Awards for Distinctive Design & Engineering received by Samsung. The ISOCELL HP1 scores a win in the category of Embedded Technologies, as the industry’s first 200MP 0.64μm mobile image sensor. The HP1 provides 16,384 x 12,288 effective pixels that match a 1/1.22” optical format. With a 4×4 pixel-binning technology, the sensor can merge 16 pixels into one large 2.56μm-sized pixel to produce bright 12.5MP images with less noise in low-light environments. The sensor can also capture crystal-clear videos at ultra-high definition of up to 8K 30fps. 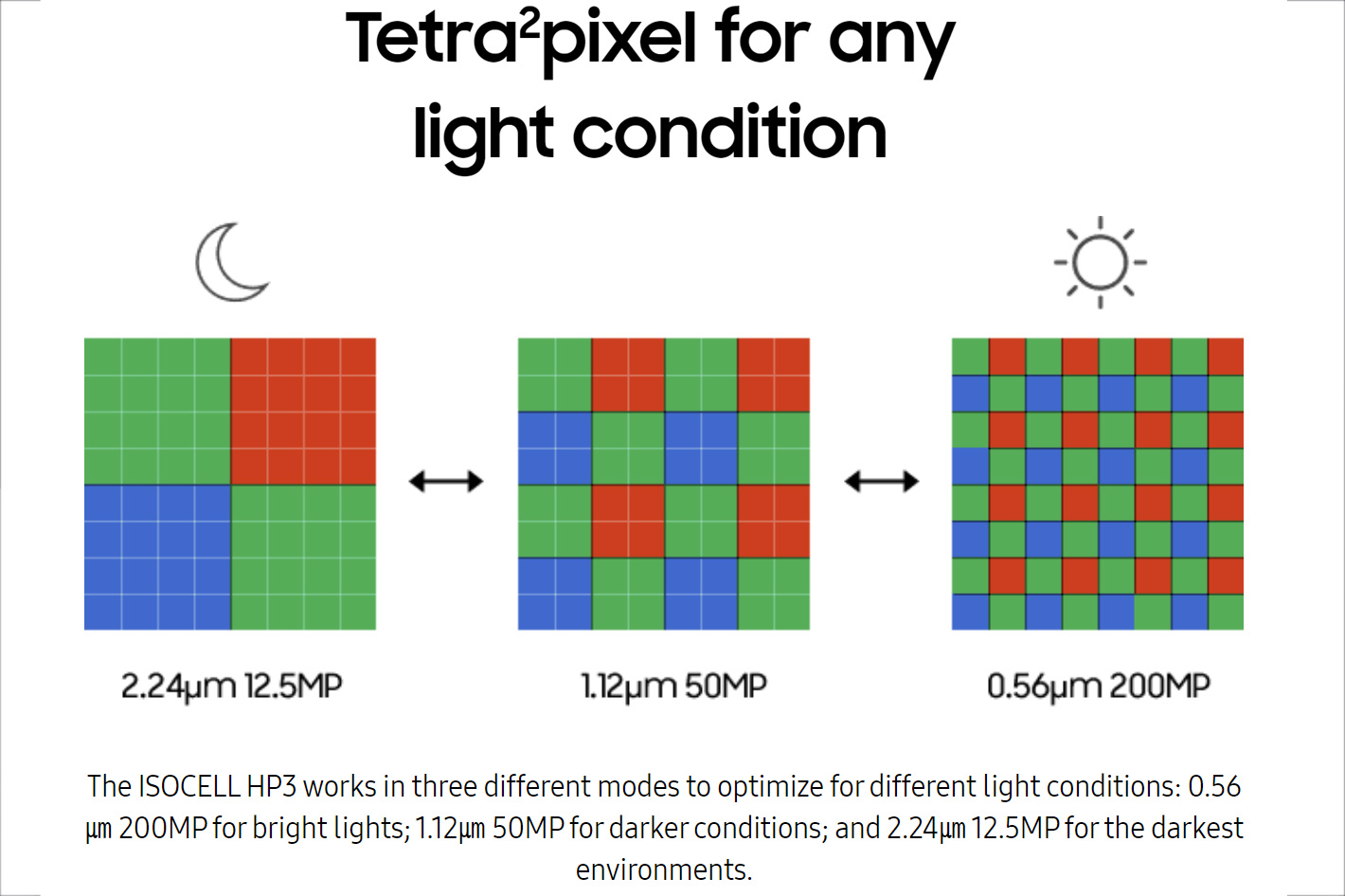 The ISOCELL HP3, introduced as offering “Epic Resolution Beyond Pro” may also offer 200MP, but it’s a different sensor, with a 12 percent smaller pixel size than the predecessor’s 0.64μm, allowing it to pack 200 million pixels in a 1/1.4” optical format, which is the diameter of the area that is captured through the camera lens. Samsung says, “this means that the ISOCELL HP3 can enable an approximately 20 percent reduction in camera module surface area, allowing smartphone manufacturers to keep their premium devices slim.”

Pixel-binning is present, and the company refers to it as ‘Tetra2pixel’ technology, providing users with the ultimate low-light experience, combining four pixels into one to transform the 0.56μm 200MP sensor into a 1.12μm 50MP sensor, or a 12.5MP sensor with 2.24μm-pixels by combining 16 pixels into one. The technology enables the sensor to simulate a large-sized pixel sensor to take brighter and more vibrant shots even in dimmed environments, like in-doors or during nighttime.

Smaller pixels, even more, is not the recipe for better photos, and smaller pixels on a smaller sensor makes it even more difficult to believe the ISOCELL HP3 is able to compete with the ISOCELL HP1. But no one can say that Samsung hasn’t tried… and the only real test will only happen when both sensors make it to devices that can use them. 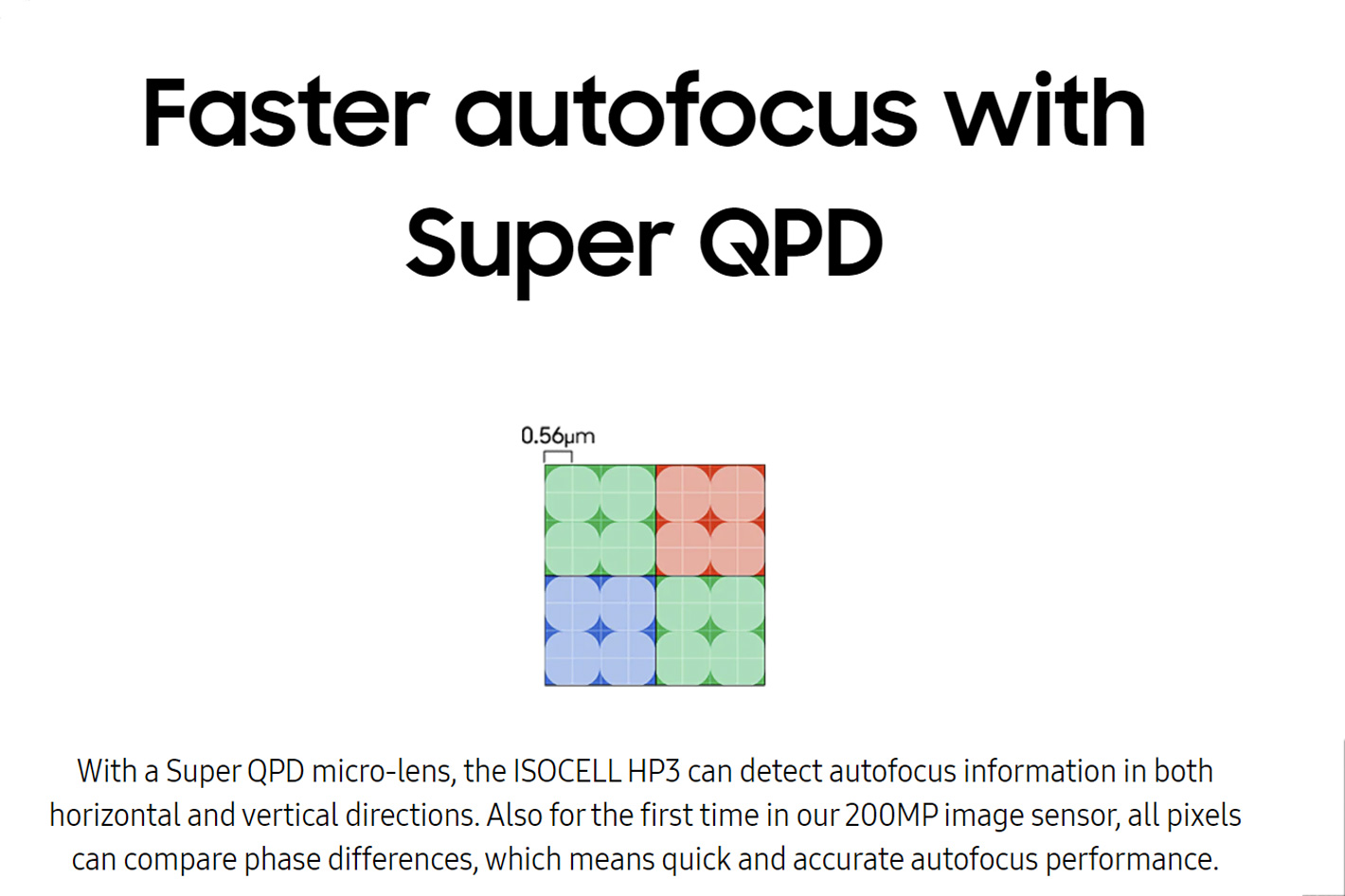 One thing is confirmed: the new sensor reflects an evolution in technology, offering, among other things, a new Super QPD auto-focusing solution (Quad Phase Detection) that is different from the previously used Double Super PD phase detection technology, which already doubled what the original Super PD offered.

What this means is that all of the sensor’s pixels on the new Samsung ISOCELL HP3 are equipped with auto-focusing capabilities. In addition, Super QPD uses a single lens over four-adjacent pixels to detect the phase differences in both horizontal and vertical directions. This paves way for a more accurate and quicker auto focusing for smartphone camera users.

Since its first 108MP image sensor roll-out in 2019, Samsung has been leading the trend of next-generation, ultra-high-resolution camera development. Through the steady launch of new image sensors and advancements in performance, the company is once again forging ahead with the 0.56μm 200MP ISOCELL HP3, which, besides all the other technology already mentioned above, also adopts an improved Smart-ISO Pro feature to maximize the dynamic range of the mobile image sensor. 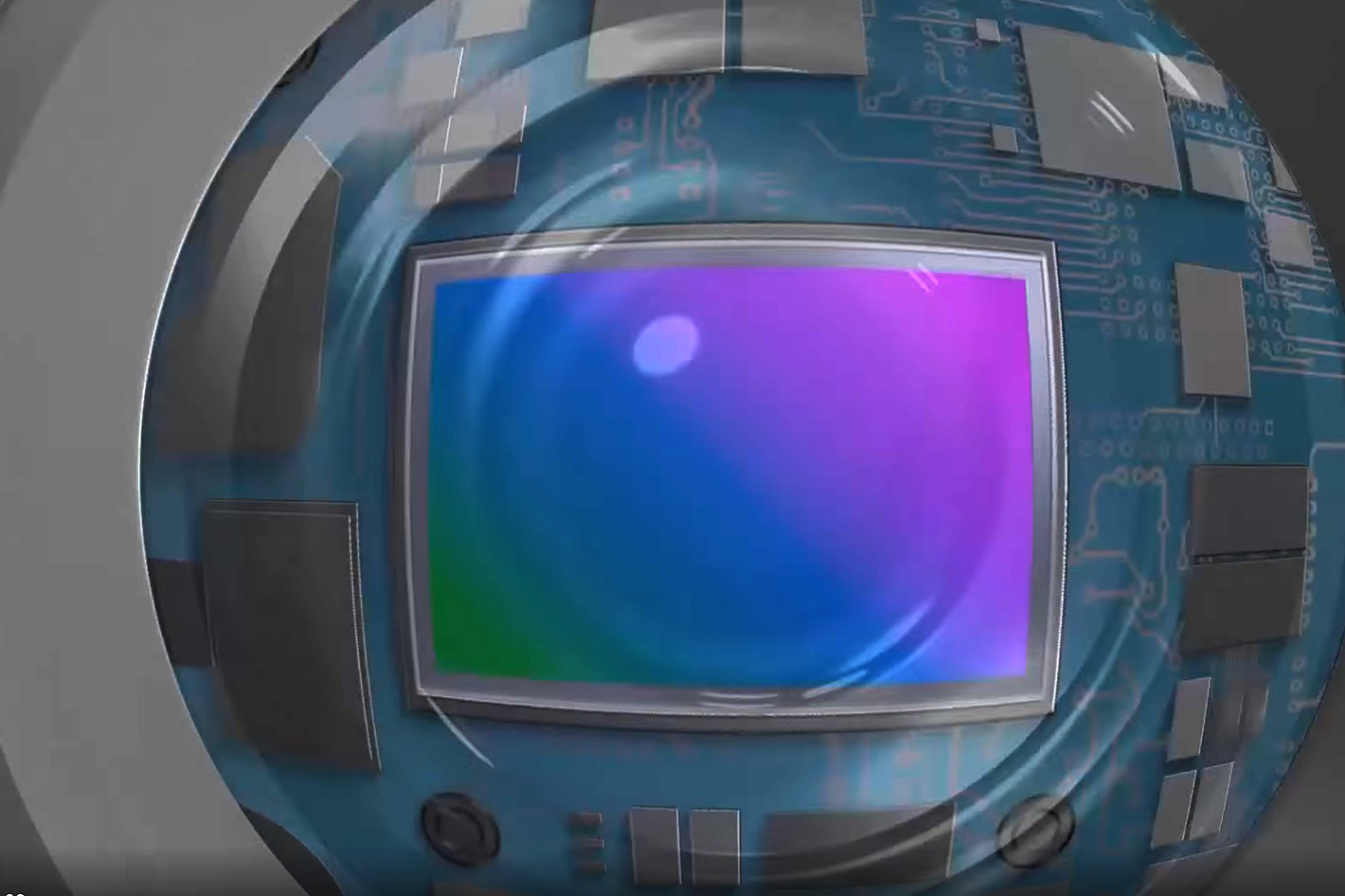 Smart-ISO Pro merges image information made from the two conversion gains of Low and High ISO mode to create HDR images. The upgraded version of the technology comes with a triple ISO mode — Low, Mid and High — that further widens the sensor’s dynamic range. In addition, the improved Smart-ISO Pro enables the sensor to express images in over 4 trillion colors (14-bit color depth), 64 times more colors than the predecessor’s 68 billion (12-bit). Furthermore, by supporting staggered HDR along with Smart-ISO Pro, the ISOCELL HP3 can switch between the two solutions depending on the filming environment to produce high-quality HDR images.

That’s good news for filmmakers. After all, Samsung says that “the sensor also allows users to take videos in 8K at 30 frames-per-second (fps) or 4K at 120fps, with minimal loss in the field of view when taking 8K videos. Combined with the Super QPD solution, users can take movie-like cinematic footage with their mobile devices.”

As smartphone makers struggle to offer better optical solutions for their systems and still keep dimensions “pocketable”, the ISOCELL HP3, with its 200MP high-resolution and 12% smaller pixels that can reduce camera module area by 20%, according to Samsung, is a welcome advancement, as it may help to find the space for better lenses. But with smaller pixels in smaller sensors, the “epic resolutions beyond professional levels” that Samsung promises and the suggestion that the ISOCELL HP3 goes “beyond Pro”  – whatever that is… – may well be just wishful thinking. For some reason camera makers stick with smaller pixel counts on sensors that are BIGGER than smartphone’s TINY image capturing devices.