It was on the same day that I got an email about the new version 6 of Storyboard Quick that I saw an article on Information Week entitled Apple Applies For Storyboard Software Patent. This article points to a patent application that includes a more detailed abstract. From the WIPO website:

The first thing I wondered after reading about this patent would be if this could be a stand alone piece of software or would it be integrated into Final Cut Pro? 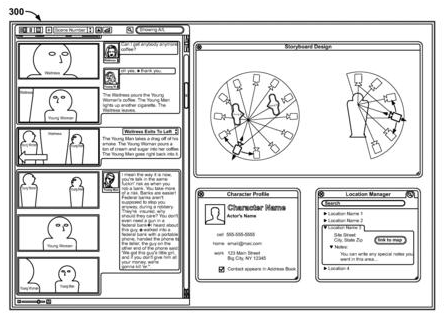 Or maybe a new piece of software that could be added to the Final Cut Studio suite of applications? The Information Week article also questions if this could be added to “Final Cut/Final Cut Express” but I can’t imagine it would be built into Final Cut Pro since storyboarding really isn’t an editor’s editing tool but more of a director’s planning tool. My bet would be that it might be added to the FCS suite. Seems like Apple could get more marketing mileage out of it as a standalone piece of software separate from Final Cut Pro. But if you look at Final Cut Pro’s two big competitors, both have a unique feature that is the “killer feature” to some users. Avid Media Composer has Script Sync that automatically lines a script for script based editing and Adobe Premiere Pro has added voice transcription. Final Cut Pro really doesn’t have that one unique feature that could be a lifesaver for those that need it as well as a marketing department’s dream. Adding integrated storyboarding would make a better trade show demo than anything else. Personally I hope it is not integrated with whatever the new version of Final Cut Pro will be. Apple needs to work under the hood on the core of Final Cut Pro before they the add icing on the cake that something like storyboard integration would be. Heck, if they want storyboard software for the FCS suite that bad they could just buy any number of third party applications out there and just add that. You can read a detailed description and more claims about this patent or just wait for Apple to bring it to the masses. That is if they ever do