One More Time for the West Coast

In our file based acquisition world of 2013 where the editing process can begin immediately right there on the set, it can be difficult to relate to a time when just getting the program recorded was a Herculean effort requiring considerable engineering manpower and over a ton of equipment.

On November 30th, 1956, the first broadcast use of videotape took place at CBS Television City in Hollywood.  “Douglas Edwards with the News” was the first “tape delay” to the west coast of the United States. The program was broadcast live to the eastern U.S. from New York.  At the same time, it was fed to Los Angeles where it was recorded and played back exactly three hours later. 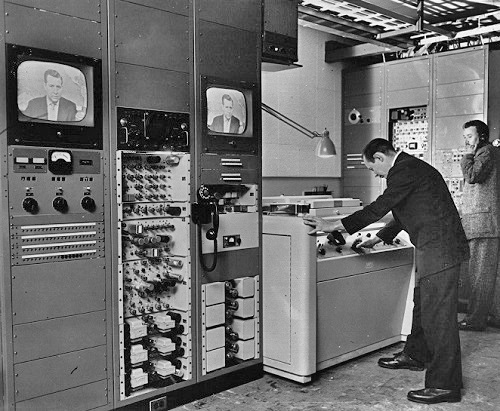 “Douglas Edwards with the News”- The first broadcast use of videotape from CBS Television City in Hollywood on 11/30/56.  Courtesy Ampex Corporation

West Coast Delay was a practice established in radio and now it carried forward into television.  The western United States is three hours behind New York.  Advertisers buying programs meant for prime time wanted those ads to be heard/seen in prime time.  Central time was the exception as the Midwest, with only a one-hour difference, was already established as having a prime time one hour earlier than the rest of the country.

This meant a live program either had to be completely redone a second time or somehow recorded and played back.  Redoing shows “one more time for the West Coast” was common in radio.  It is one of the reasons Bing Crosby contributed to the process of audio tape recording.  If he could provide ABC Radio with a recording indistinguishable from a live feed, the network wouldn’t require him to do his show twice each week and he could spend a lot more time on his golf game.  His investment in Ampex Corporation after the end of World War II led to the invention of audiotape recording and changed the face of radio broadcasting (see this overview of the company on the occasion of their receiving the 2008 Technical Grammy Award)

Redoing a television show a second time was not practical and would be much more expensive then redoing radio programs.  However, recording television programs on tape was not as simple as with audio recording.  Video signals conveyed a lot more electrical information and had a wider bandwidth.  In short, a bigger pipe was needed.

First came the kinescope.  In the fall of 1947, Eastman Kodak Company with NBC and the DuMont network developed the first viable method of distributing copies of live television programs by converting them to 16mm or 35mm film.  The simple explanation of a kinescope is a motion picture camera photographing a television screen.

Very early kinescope samples.  Kinescope Equipment is shown and explained at about 3:55.

The quality of kinescopes had nowhere near the resolution of live television and they were cumbersome and time consuming.  The film had to be unloaded from the camera then rushed off to be processed and printed.  Some editing had to be done to add leaders and the sound track added.

As more television stations went on the air, use of the kinescope became common, particularly by the networks.  Even though the quality was inferior, they were still obligated to provide program delivery to their affiliates no matter their location.

Construction of the system interconnecting stations via transcontinental microwave and cable was just underway and wouldn’t be complete until Fall, 1951.  As construction crept westward, a station’s distance from New York determined whether it received a show live or via kinescope (Not all shows seen on the west coast were kinescoped.  The Ed Wynn show originated at CBS’ Columbia Square studios in Hollywood beginning in 1949.  The show was live to the western affiliates but was seen via kinescope on the east coast two weeks later).

The Ed Wynn show was the first network series to be aired live on the west coast and have the kinescopes shipped east, where they would air a couple weeks later.  This program was live to the west coast on March 11, 1950 and aired to the east and midwest on March 25, 1950 via kinescope.

Even with the completion of a live transcontinental feed, programs in the west would still have to contend with the three hour time difference.  So in 1952, the “Hot Kine” was born.  CBS and NBC began a process where a live show was recorded as it went out to the east live but was recorded in Los Angeles on 35mm film, rushed to a local film laboratory by courier, processed, dried and returned to the network in time to be threaded onto a film chain and transmitted to the western affiliates.  The term “Hot Kine” was coined because as the film was being loaded onto the projector, it was still warm from the processor’s dryer.

By 1954, American TV operations were using more raw film for kinescopes than all of Hollywood’s film studios combined.  In 1955, CBS was shipping 2500 kinescope prints to its affiliates a week!  The networks were desperate for a solution to save all that time and money.  As the need became more acute, several companies began a high stakes process of research and development looking for a way to solve the problem.

As early as 1950, Bing Crosby Enterprises was created having broken away from Ampex after the successful development of audiotape technology.  On November 9, 1955, a team from BCE including Jack Mullin, the major engineering force behind audiotape at Ampex, demonstrated a working color videotape machine.

The tape was one half inch wide but ran at 100 inches per second allowing for only 15 minutes of program time per 14,000 foot reel.  A very high tape speed was required to attain the bandwidth needed for the video signal.  At the time, the spokesmen said a commercial product could be available in 1957.  They claimed a black and white version was already developed but wanted to release a color product of comparable quality. 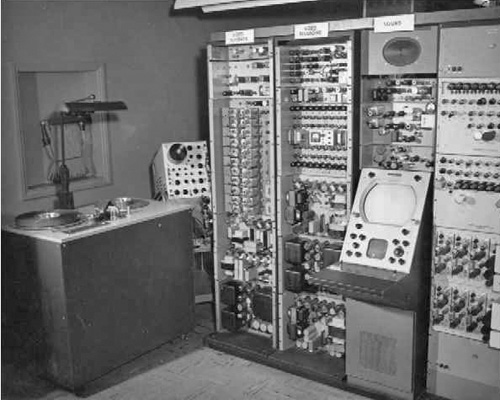 RCA, the big name in television equipment at the time, was also working on a method of recording video to tape.  However, in an article in Broadcasting magazine on November 14, 1955, it was pointed out that “RCA apparently feels magnetic tape for color TV is still some years away.”  The company had just spent millions of dollars to install new color kinescope film facilities in both New York and Burbank.

Ampex was the dark horse.   They began work in 1951 in complete secrecy, even stopping work on the project several times to give priority to other projects.  But the core team of engineers – Charles Anderson, Shelby Henderson, Alex Maxey, Fred Pfost and lead by Charles Ginsburg kept coming back together and making spurts of progress.  One talented engineering student working part time even dropped out of school to work on the project and lost his student draft deferment as a result.  He went off to the military and, when he returned two years later, was welcomed back into the fold.  That student was a young Ray Dolby who later founded Dolby Laboratories.

Over the following five years, the Ampex team worked thorough the various problems. Finally, the complex issue of bandwidth vs. tape speed was solved by introducing transverse movement of the tape heads across two inch wide magnetic tape.  Moving at a more reasonable 15 inches per second, four tape heads switched synchronously as they passed across the tape.  At last, recorded images were, like audiotape, indistinguishable from live.  They were ready to demonstrate a prototype. 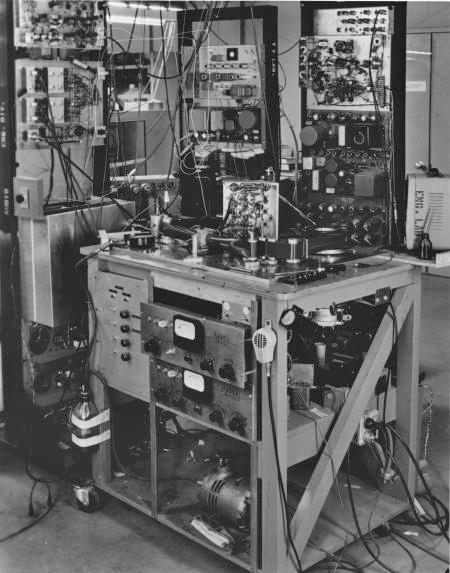 Equally secret were the early 1956 visits of various representatives from CBS, ABC, the CBC and the BBC.  So impressed was CBS Vice President Bill Lodge that after his visit, the network immediately placed an order for three of the machines.  Arrangements were made to unveil the project at the upcoming National Association of Radio and Television Broadcasters Convention.

On Saturday, April 14th,1956, in a Chicago hotel meeting room, Lodge spoke to 200 CBS Affiliates about a new technology to be introduced by the network.  A CBS live camera and video monitors were set up around the room.  No one thought twice about it as CBS had done this before to add a “show biz” aura to the proceedings.  Lodge concluded his remarks but remained at the podium.  Suddenly, the monitors went black.

Then a picture reappeared and again showed an image of Lodge.  Only he was not standing silently as they were seeing with their own eyes – he was delivering his remarks again!  At first, the crowd stood silent as 200 brains collectively assimilated what they were seeing.  Then simultaneous realization struck followed by pandemonium.  The room erupted in spontaneous applause.  A curtain was drawn back revealing the Ampex team and their Mark IV prototype.  The crowd couldn’t restrain itself.  Amid cheers, whistles and back slapping, the crowd surged toward the prototype and it’s designers.  That week, Ampex sold over 75 of the $50,000 machines (over $400,000 in 2013 dollars). 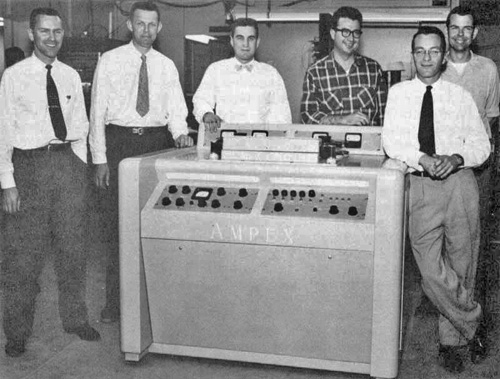 No more huge film stock expenditures.  No more runs to processing labs.  To record a program, one must only press a button.  Then simply rewind and press another button to play it back.  Then record again on the same piece of tape.  Recording costs plummeted.  Kinescopes would continue to be made into the early 70’s for specialty applications but it was obvious going forward, videotape was in charge.  In 1957, Ampex was recognized for its contribution with a Technology and Engineering Emmy award for the invention of videotape.

A comparison of kinescope and videotape.  From Kris Trexler’s website kingoftheroad.net.

Today, videotape is poised to experience the same fate as kinescopes.  File based solutions are relegating tape to less and less uses.  And someday, an upstart company with creative minds at its helm will find a replacement for file applications, too.

It is the inevitable, continuing evolution of video.