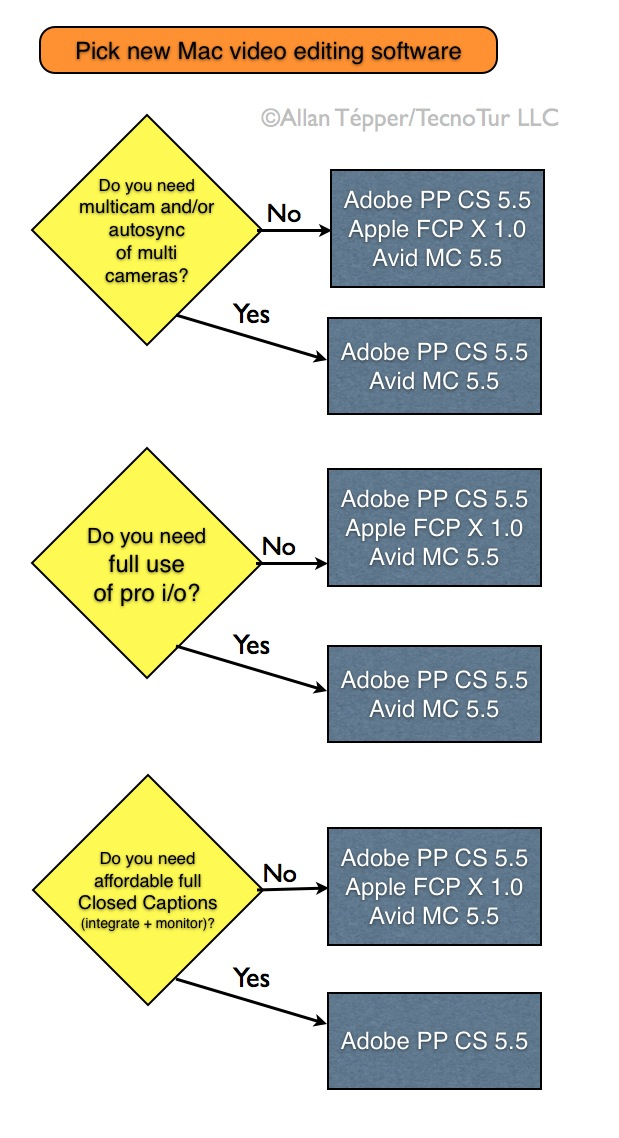 After the launch of FCP X 1.0, Mac users can finally analyze which video editing software to choose depending upon key features. Now there is finally a recent version to compare from Adobe (Premiere Pro CS 5.5), Apple (Final Cut Pro X 1.0), and Avid (Media Composer 5.5). Since Apple has ceased to support FCP 7 as of the release of FCP X, the possibility of using FCP 7 under MacOS 10.7 (Lion) is unpredictable. [UPDATE: Apple has stated that FCP7 will run under Lion.] This article will cover three key features which may be critical to your current or upcoming projects: multicam (or the capability of auto syncing clips from multiple cameras, whether or not some of them have stopped recording during the event), full use of a professional i/o interface (like the ones from AJA, Blackmagic, Matrox, or MOTU), and the inboard capability of incorporating and viewing closed captions. Since as of October 2010, closed captions are legally required in the USA even for certain web videos (details ahead in this article), this will be of increasing importance to many editors.

Various sources have confirmed that Final Cut Pro X 1.0 does not include a multicam function, or even the XML export/import that makes the renowned third-party app PluralEyes work. I must clarify that I am referring to PluralEye’s multiple camera synchronization (which works whether or not some of the cameras have stopped recording during the event). I am not referring to PluralEye’s function of synchronizing dual-system audio, which is a standard feature in Final Cut Pro X (and in Premiere Pro CS5.5). Both multicam and XML export/import have existed in prior FCP versions, as well as in the current versions of two competing apps, Adobe Premiere Pro CS5.5 and Avid MediaComposer 5.5. If multiple cameras (or multiple angles of a single camera, i.e. a musical video) are a must-have, then consider Adobe Premiere Pro CS5.5 or Avid MediaComposer 5.5, especially since FCP 7 may not even run on MacOS 10.7 (Lion), and it will not be supported by Apple. UPDATE: Apple has announced that FCP 7 will run on Lion, and that FCP X will (in the future) support both XML (or something equivalent) and multicam. See the Apple FCP X FAQ here.

Full use of a professional i/o interface

Prior to FCP X, all three Mac professional video editing apps I am covering here (Final Cut Pro, Premiere Pro CS5.5, and Avid MediaComposer 5.5) have offered full and continuous use of its supported i/o devices, with the notable exception of Avid Media Composer, which supports the Matrox MXO2 Mini, but only for output… and the original MXO (with any supported app), which only has outputs, no inputs. (Avid Media Composer 5.5 works both for ingest and output with the AJA Io Express.) On the other hand, FCP X 1.0 offers extremely limited functionality with professional i/o devices (no capture or print-to-tape via the professional i/o interface), and even when used that way, FCP X’s output is considered not trustable for critical monitoring. AJA’s PDF states:

The quality of the output produced during editorial (with FCP X) should be considered preview quality.

I have contacted HP’s DreamColor architect to determine whether a directly-connected DreamColor monitor would be trustable for critical monitoring with FCP X. He is testing this and I’ll update this as soon as I receive his response.

None of the video editing apps covered in this article is capable of creating closed captions. However, all but FXP X can import them in one fashion or another and view them with the app. To my knowledge, it is not (yet) feasible to do this with FCP X for HD files/projects. Up until Final Cut Pro 7 and Avid MC 5.5, this has been possible with a rather elaborate importation, and with the use of a rather costly 3rd-party application. In order to view the closed captions within the NLE, 3rd-party hardware has also been required. However, Adobe Premiere Pro CS5.5 can accomplish this with a simple importation from a file generated by at least one affordable closed caption creation application. Soon I’ll be reviewing at least one here in ProVideo Coalition magazine. Stay tuned!