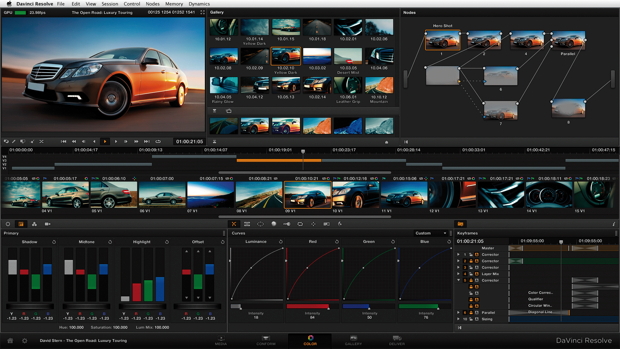 What are you talking about Allan? AJA, Matrox, and MOTU don’t manufacturer or sell cameras! How will the Blackmagic Cinema Camera take sales from AJA, Matrox, and MOTU? The reason is related to the DaVinci Resolve grading software that Blackmagic is including with the camera at no extra cost. Even though Apple bundled Color (which was an updated version of Final Touch) with Final Cut Pro 7, very few people I know actually used it, and it is effectively dead since Final Cut Pro 7 is no longer available for sale, and Apple doesn’t supply Color with Final Cut Pro X. Things will be different with Blackmagic’s inclusion of DaVinci Resolve with the camera, because almost all users (i.e. anybody who shoots in RAW mode) will need to grade their footage. Given DaVinci Resolve’s excellent historical reputation and the fact that purchasers of the camera will get a free license, many of them will likely want to invest in learning to grade with it, rather than spending cash on some other grading application. In this article, I’ll explore why this situation will mean less sales for AJA, Matrox, and MOTU.

If the purchasers of the Blackmagic Cinema Camera who end up using DaVinci Resolve want to connect a monitor to see the full screen video output while grading, they’ll quickly discover that they currently have no choice but to use one of two Blackmagic interfaces. That’s because Blackmagic has written DaVinci Resolve to work only (at present) with either the DeckLink HD Extreme 3D card (US$995 list price) for a tower computer, or an UltraStudio 3D external interface (US$995 list price) to connect to a Thunderbolt-capable computer. Whether they already owned (or were considering purchasing) one of the fine professional audio/video interfaces offered by AJA, Matrox or MOTU, it won’t work with DaVinci Resolve. Blackmagic’s message is clear: “Resistance is futile!”

I would say that this is an example of a free market system. There was a time when Avid Media Composer and Pro Tools would only work with hardware sold by Avid. During that period, enough people migrated to more open editing software which would work with multiple hardware manufacturers that Avid finally changed its policy and now its applications are extremely open. I suppose that as long as Blackmagic is the only manufacturer in its US$3000 price class offering a camera with 12-bit RAW video recordings and is giving away a grading application as attractive as DaVinci Resolve, many users will comply with Blackmagic’s decree. This is a similar situation as Apple’s free iBooks Author software and the fact that the only e-book output it supports is the one for the iPad. Want more flexibility? Buy some other software. In the case of grading, that might well be Adobe’s new SpeedGrade, about which I’ll be writing in the upcoming weeks.

So what about these interfaces from Blackmagic I need to buy?

The UltraStudio 3D is currently the only Thunderbolt audio/video interface that is compatible with DaVinci Resolve. The UltraStudio 3D certainly works fine with 2D workflows too, and is compatible with Adobe After Effects, Adobe Premiere Pro, Apple Final Cut Pro, Avid Media Composer, and even Pro Tools. Its SDI ports are 3G, and its included breakout cable facilitates connections to legacy component analog formats like Betacam SP without having to purchase any extra analog component cables or XLR audio cables as long as the machine is close. We’d just like Blackmagic to remove the necessary “Band-Aid”, as described in the next section.

Both the DeckLink HD Extreme 3D card (US$995 list price) and the UltraStudio 3D external interface (US$995 list price) are good products that work well. I know because I have been there to integrate them when some of my consulting clients have purchased them. AJA and Matrox interface products are also very good, and each one has one or another unique advantage compared with its competition. (I don’t have personal experience with any of MOTU’s video products, only their audio/MIDI devices.) However, there is one continuing weakness that has already been corrected in interfaces made by AJA and Matrox, that unfortunately remains pending with Blackmagic’s products, despite years of prodding, both in articles and private emails, as you’ll see ahead. 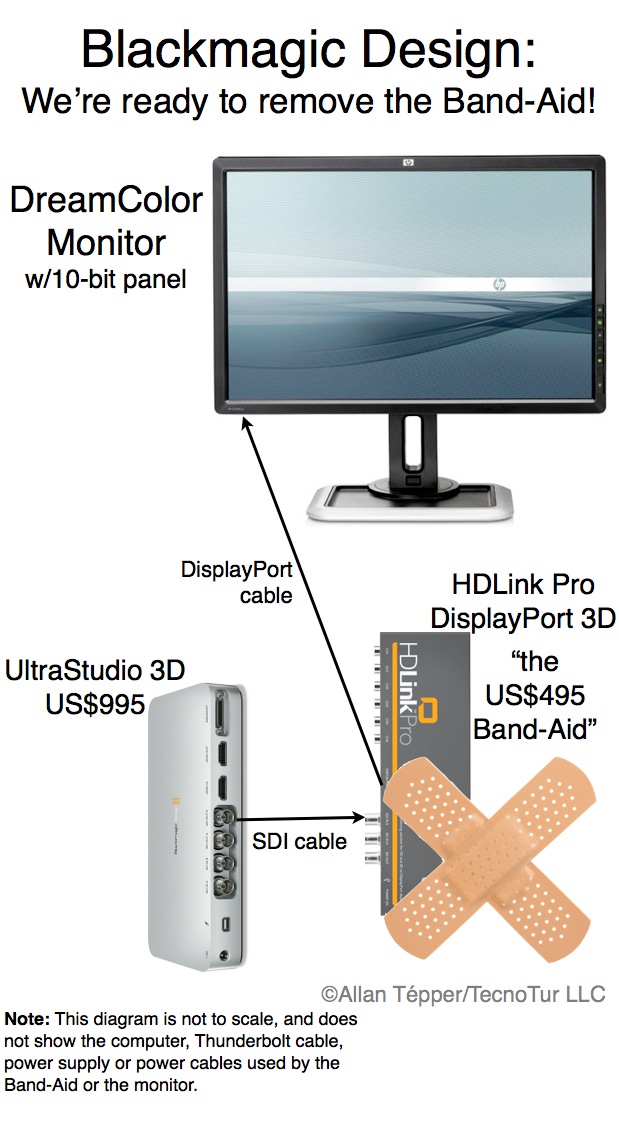 Despite years of diplomatic prodding, both via articles in ProVideo Coalition magazine and private emails, Blackmagic has still avoided and postponed offering RGB on its HDMI outputs. [If you’ve read my articles in the past regarding HP DreamColor connectivity, you already know that the DreamColor engine demands digital RGB (not YUV/component) and true progressive (not interlaced or even PsF).] As a result, until Blackmagic updates their products (hopefully via a firmware and software update), you’ll have to spend an additional US$495 for an HDLink Pro 3D DisplayPort which will take the SDI signal from either the DeckLink HD Extreme 3D card or the UltraStudio 3D external interface. And that also means an additional SDI cable, an additional power supply, an additional power outlet, and having to make additional adjustments in another device.

The last time I contacted Blackmagic about this issue was less than a month ago, just after NAB in April 2012. The answer I received from Blackmagic’s USA public relations department via email was that it would only offer RGB over HDMI “at 1080p60” and from an RGB/4:4:4 timeline as a source. As you probably know, 1080p60.000 is a non-standard signal, since standard progressive signals include :

It is certainly possible that Blackmagic’s public relations department (or their internal source) was simply rounding 59.94 to 60 when responding to me. Even so, we really want to send the exact matching framerate of the timeline to the monitor. We don’t want it cross-converted to 59.94 or 60.000 when the timeline is at one of the other framerates. And although everything in a grading program may be transcoded to RGB upon import, that’s not typically the case with video editing software. As stated previously, AJA and Matrox have all added this capability, which transcodes the YUV (component) to RGB on-the-fly when necessary after the user has selected to force RGB on the HDMI output. I have no idea whether Blackmagic is avoiding adding this digital RGB-over-HDMI feature to the DeckLink HD Extreme 3D card and the UltraStudio 3D on purpose to force us to buy the additional US$495 “Band-Aid” (the HDLink Pro 3D DisplayPort), whether they have simply been busy with other things, or whether it has been an oversight.

Why do I like the HP DreamColor so much?

The short answer is because the HP DreamColor is by far the lowest cost LCD critical evaluation monitor with the following included:

For the long answer, see the links to related articles at the end of this article. 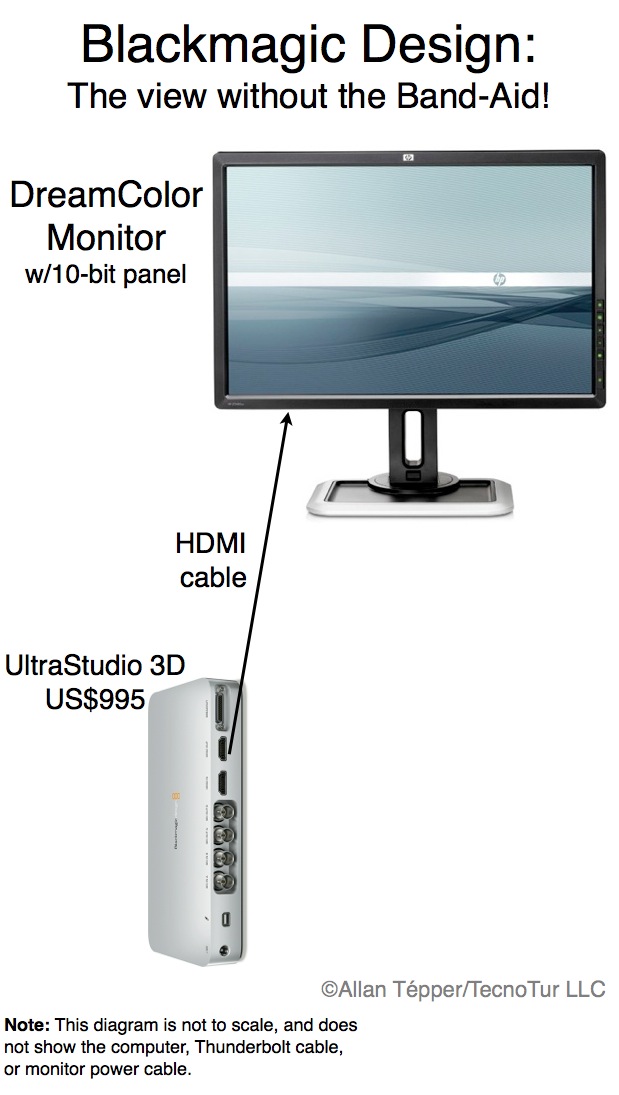 I have created an online petition. Please click here to sign it to ask Blackmagic Design to add the necessary update to these products, and to others if possible.