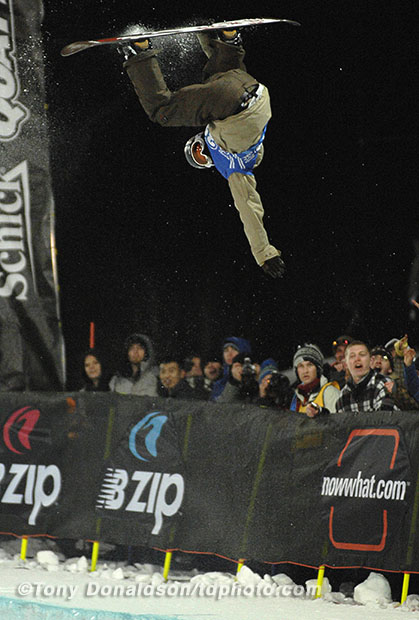 Shooting winter sports is fun, especially if you’re prepared. I’ve compiled a few tips to keep you warm, dry and creatively capturing the action in some extremely cold, high-altitude conditions.

The backgrounds are usually clean and white, if it’s clear you have nice blue skies, and your contrast range is ultimately easily controlled, using the world as your fill card. The crisp winter air, beautiful scenery, and adrenaline rush the athletes and spectators experience all make for a great time.

I’ve covered many of the Winter X Games, and various other usual and unusual winter sports for various clients, and it’s more exhausting but every bit as fun as the summer sporting events.

Be prepared for anything, weather-wise. Check out weather.com and find the website for the venue you’re going to. They’ll give you some idea, and you can pack your core wardrobe based on that. Layers are the ONLY way to go here. It’s not like you’d dress for when you’re snowboarding, because that tends to be not as warm. If you’ll be standing around a lot, which if you’re at an event you will be, you have to be prepared for more cold because you’re not moving. Expect that if you’re in sun, you’ll be significantly warmer than if it’s shady, and if clouds are intermittent, you’ll be very confused, body teperature-wise.

Layers, sunscreen, a good hat or mask are all good ideas. I was on a three-day shoot, I had a hat and put on sunscreen, but didn’t put any on the underside of my nose, and wound up with an UGLY sunburn on just the bottom of my nose.

Snow pants or some other waterproof lower attire is ideal, since you’ll often be kneeling in the snow for a good angle. You may be in a t-shirt on top if it’s spring conditions, but you want your lower half to be dry. The stuff made for snowboarding is fantastic. Comfortable, huge range of motion, and often with zippered vents to allow you to keep cool in warmer times and close them up to stay warm when needed.

Footwear can vary based on conditions. If you’re bringing a snowbaord, snowboard boots can be useful, though they’re stiff and supportive which can hinder the freedom of movement you’d relaly like for some shots. Waterproof boots, e.g. Sorrels, are good all-around boots for most things. They’re made for this type of climate. If you have to trudge up a lot of icy stuff, which you probably will, get something like Stabilicers.

They strap on in seconds, hold you on icy paths, and aren’t scary like crampons. Also way less expensive.

I take good Gore-tex gloves for general use, and knit gloves for my right hand for shooting when I’m actually shooting. I figured out that I should cut out the end of the index finger and the thumb tip for the way I handle the camera. Even thin knit gloves aren’t tactile enough for the buttons.

At the beginning of the season, I drop off my snowboard at a local shop to have it tuned. Having the board there is good for your return back down the mountain if you’re where the lifts don’t go and you’re not allowed a snowmobile (ALWAYS try to get access to one of these in advance, makes travel a lot faster). If you’re getting yourself down the mountain under gravity power, be sure your skills and abilities are strong enough. I’ve done diamond runs with 38 lbs of cameras on my back (and one body and lens out and in use) for books and magazine shoots, and it taxes my skills to not fall doing that. If you can’t ride without your gear, you’ll never safely ride with it. No job is worth breaking your back for.

On the other hand, at Winter X our credentials are good for 3 more days after the event, so if I can I build an extra day into my trip to have a chance to ride. I’m usually exhausted after several days of shooting, but who can’t find the energy for some fun on the slopes?

Bring water containers. I like the insulated Polar Bottles®, they keep your water from freezing as fast in cold weather. Drink a lot of water, and eat occasionally, perhaps Powerbars or Goo or if you can spare the room, bananas are great. Most important to keep hydrated, you’re often at a higher elevation and in much lower humidity than you’re used to. Not only will this get you out of breath way faster than you’re used to, but it’s REALLY exhausting. You’ll sleep really well, unless you’re sore from all the exertion. It’s a good idea to try to keep yourself in shape for these situations.

WHAT GEAR TO BRING

In addition to your longer glass for some distant shooting, bringing wide angles allows you to get close to the action and show a lot of the beautiful surroundings. Daytime shooting is often very bright and doesn’t need the fastest lenses, so you can save weight if needed by bringing smaller, lighter, slower lenses. If you’re shooting at dusk or at night, you may want faster glass if you’re shooting available light. If you bring every lens you own and your full strobe kit, either you’ll need an assistant or two or at least convince your buddies to help schlep the gear. It’s better to bring a carefully planned, light set of gear even if you do have assistants to help schlep, the altitude and snow will really make that gear seem heavier.

Your gear can take a beating in winter conditions. Professional still cameras have amazing weatherproofing. Usually snow spray won’t phase these things. But the batteries are another story. I keep my spares in inner jacket pockets (usually in plastic bags) to keep them warm. Digital cameras can’t operate without batteries, and batteries appear to die faster in cold. Notice I say “appear”. They don’t, but when they’re cold they think their voltage is much lower than it really is. Hence rotating them in and out of inner pockets.

You can also look into external batteries. The Digital Camera Battery [get details] is a little pricey, but it comes in various sizes annd long cords that can power cameras, laptops and other devices, and can be kept inside clothing to keep warm. There are cords for most cameras for Quantum Turbo batteries that can do the same thing, handy if you already own one to use for your flash gear. 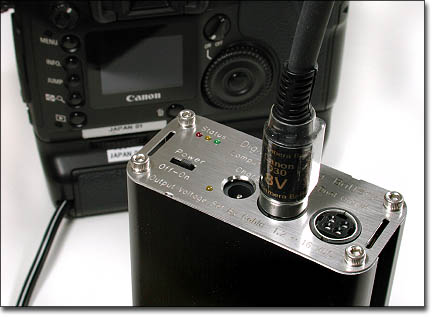 I often keep a handwarmer in my camera bag, separate from the rest of the cameras and lenses, to help keep them from getting too cold. Keep in mind that when you bring extremely cold cameras into a warm room (e.g. for editing/uploading photos), keep the cameras inside the bag and don’t open it if you can help it. Take the cards out while you’re still outside and close up the bag. This way you keep condensation to a minimum. I still keep a few silica/desiccant packs in my bag to help deal with this.

Just like the summer X Games, during winter events your best time to get close to the action is during practice. You can get right on the edge of the halfpipe during practice, but you’re behind the barrier during the competition. So watch the schedules carefully if you want to get close. Just use good judgement and keep both eyes open, if an athlete screws up they can land on you on the deck. Those edges on the skis and snowboards can slice you like a knife blade, and just the sheer weight of the athelete multiplied by the height they fall from can do some serious damage to you and your gear.

On the other end, long glass can be great for getting an athlete shown against specific background elements. The snow fills your shadows, so usually you won’t need any kind of flash.

Plan your schedule to get the awards for each event. They often sell and it’s an easy way to get headshots.These can be tough to shoot, you either have to get there super early to get a close spot, or you can shoot from the back to include the crowds in the foreground of your shots. It helps to be tall (I am not!) or find a way to be above the crowds.

Bringing a phone is a good idea. Sometimes you’ll have no signal depending on where yopu are in the mountains, so sometimes having a walkie-talkie (the FRS radios are decent) and someone on the other end is helpful. If you’re within the approved areas, there’s almost always someone there. But lets face it, if you’re a typical action sports shooter, you may have less regard for those rules. I know a lot of people who go out of bounds for a better shot or to get back down the hill. Not the best of ideas, but it happens. Make sure you have plenty of water and some food, some kind of signal (a whistle can be good if you’re not one to carry a flare gun) and extra layers in case you get stuck.

Use your head and be safe, and make some great images!