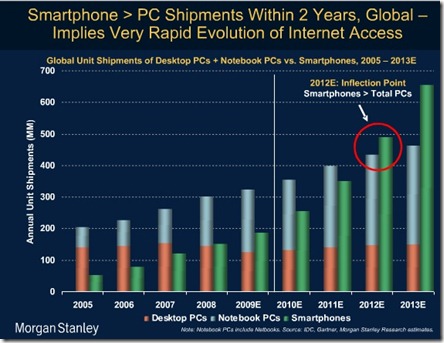 For those of us who been around computing since the early days of PCs, the consumer move to mobile devices and away from desktop and even laptop computers is astonishing–and maybe a little terrifying.

In the first year of its existence, 1981, the IBM PC sold 100,000 units. Most of those buyers were geeks or leading-edge business users. Apple’s iPad sold 1 million units in less than one month and 2 million units in just two months. IPad users still include geeks and business types but they’re just as likely to include your six-year-old and your grandmother.

These unbelievable sales numbers represent a fundamental transformation in the way a very large segment of the population is consuming information and accessing the Internet. To get some idea of the seismic nature of this shift take a look my favorite highlights from a presentation given by Morgan Stanley at the June 2010 CM Summit in New York City: