Lighting is an evolving art form. Not only does technique change and advance but so does the technology of how light is produced and generated. Even a decade ago the landscape of production lighting was much different from what it is today. Just like with the cameras that are coming out today, the affordability of owning your own light kit is increasingly becoming more possible. The good news is that you don’t have to own much nor spend much to have a good small light kit to use for many types of productions. Gone is the day of having to have 5K and 10k HMIs and Maxi Brutes on set for many productions. Of course these are still used for high end commercials, music videos and films but more and more you are hearing of filmmakers making full feature films with just some LED and florescent light kits.

Throughout this series I’ve talked about technique when it comes to using your lighting setup (if you missed the others, read Part 1, Part 2 and Part 3). As I close out the series I want to talk about the lights themselves so you have a better understanding of the tools you have available to you.

Here in part IV I want to address the issue of knowing what lighting to get for your production. I’ve heard many times from filmmakers that they often don’t know what to get for their productions because (and thankfully) there are many choices and with each choice requires different budgets. I think many filmmakers give up on trying to decide and just get an Arri 4-light kit and they’re done. But knowing what each light is for and putting some thought into your lighting setup will help you make some decisions and be confident in choosing your lighting package. I’m going to break down the post by What are the different types of lights and then for each light talk about How are those lights typically used and Why would you use them for your production. This will not be a comprehensive list as the post would get very long but it will give you a basic understanding of the different types for you to get started. Then, as you need, you can learn more from other resources (and there are plenty out there on the web!). 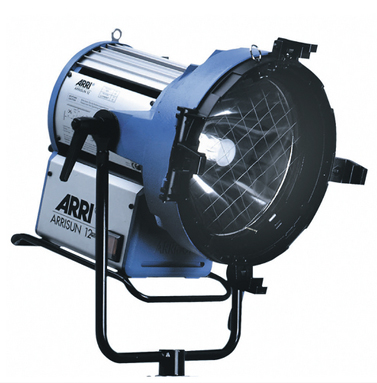 What: HMI lights (Hydrargyrum medium-arc iodide… yeah, just remember HMI and you’re fine!) are a standard in film and television. HMI lamps come in all sizes usually as low as 200 watts all the way up to 24,000. They require a ballast to operate and some of the low wattage lamps can even run on Edison power (home/office plugs) but most of them require generators or high amp circuits. They are one of the most expensive genre of lights so often you will rent these for your production.

How: Typically HMI lamps are used to generate daylight or a daylight effect because of the standard 5600K-6000K rating. And because you can go up to a 24k light, they can generate huge amounts of light, 4 times the lumens per watt of electricity over tungsten lamps. Most scenes you see where moonlight or daylight beams projected in the scene are usually HMI lights being used.

Why: I personally have used HMI lights for key lights as well as set lights. They are very versatile when it comes to their use. But you definitely want to use HMI lamps when you need to light a large area of your set. Also if you want to to mimc any kind of moon or daylight, HMI lights are most often the best choice. As I mentioned in part 3 of this series though, get the most wattage you can afford and the least number of lamps. You’ll be amazed how you can use one lamp and create two different light beams with some flags and scrims. 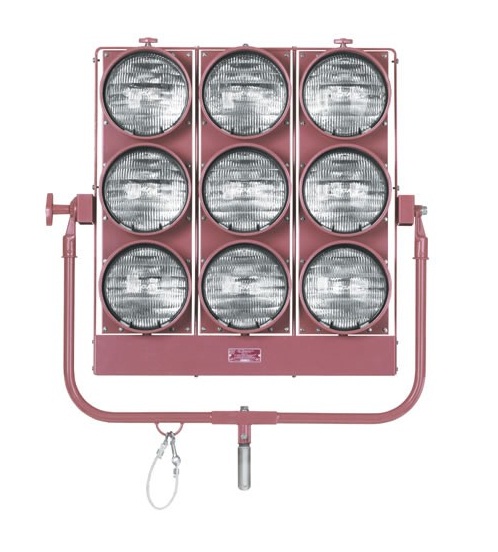 What: Tungsten or Halogen lamps have been used since the birth of cinema because they use incandescent bulbs to generate the lumens and incandescent lighting has been around since the late 1800’s. Just like a typical light bulb in your house, tungsten lighting is a native 3200k-3800k temperature and can run on Edison power. Larger lamps requiring more wattage (typically 2k +) will require generators or larger amp circuits. Tungsten lamps come in a many forms so they are extremely diverse as well as low cost both in purchase and rentals.

How: Tungsten lighting are used in many ways. from particular lighting, to large source lighting, stage, theater, etc. Like HMI lamps, tungsten lamps can be used to light sets and large scenes. Although not as powerful a light with the same wattage as the HMI there are some benefits for using tungsten lamps. They are favored when shooting at high frame rates versus HMI because HMI lamps typically give off a flicker effect when you slow over-cranked footage down to 23.98 or 29.97fps. Also, some filmmakers like the look of tungsten over other lights because of the flesh tones they get from incandescent bulbs

Why: Although I’ve moved away from tungsten as my main source for lighting I still use them. I will often use them for particular lighting, back or hair lights and effect lighting. Even though modern HMI lights have flicker-free ballasts, I’ve read that depending on what speed you over-crank your footage will depend on how effective that setting will be when using HMI lights. So even today, most filmmakers will use tungsten when shooting at higher frame rates, usually above 300fps. 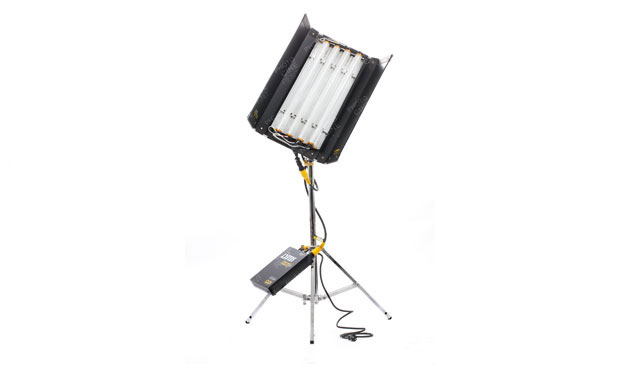 What: Florescent lamps uses bulbs that are mercury-vapor filled and is illuminated when an electrical charge is omitted causing the vapor to glow inside the bulb housing. You often see them in office buildings and in modern times being used in the home. For film and video production they are used to give off a soft light and generate relatively very low heat and consume very low amounts of electricity. For this reason they are very desirable for production. Fluorescents are somewhat inexpensive to own and very affordable to rent.

How: Filmmakers typically use florescent lighting to illuminate their sets in different ways. Many times to replicate a real work setting such as office and industrial sets. But they are also used on medium to close shots to light their subject without generating a large amount of heat as well as to get into small areas such as automobiles and confined spaces. The drawbacks to florescent lights is they do not generate a large amount of light nor can throw light very far so they are often not used to light large sets or exterior lighting.

Why: I love using fluorescents for key lights on subjects when I’m shooting interviews or need to get into a tight areas. With digital cameras now able to shoot at a high ISO without much grain or noise the low amount of lumens sometimes is not a factor. Also, fluorescents give off a nice soft light so having to use diffusers becomes less of an importance. Florescent lamps often come with dimmers so they are very flexible when used as a fill light and you can obtain different temperature rated bulbs so you can match daylight or tungsten should you be using fluorescents with existing lights already in your lighting package. You can also throw some colored gels over the fixture and create some nice glow effects for your set.

My Favorites:
Anything Kino, not the cheapest but they are the best imo! 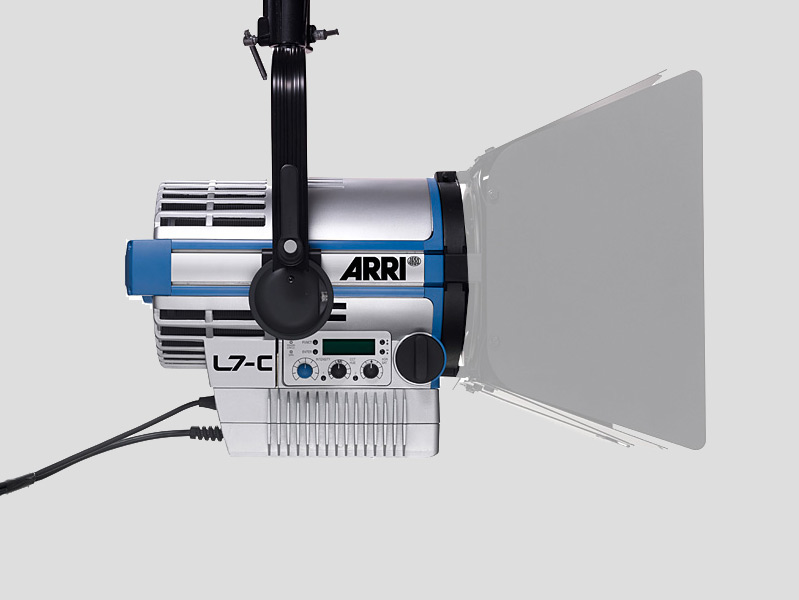 What: LED lighting has come onto the scene with a vengeance. Above all the other types of lighting I’m mentioning, LED is advancing at a higher rate than any other. LED (Light-Emitting Diode) originally was used for infrared lighting but in the 1960’s began being used for visible light in electronics and small devices. Today they are now being used in film and tv in many ways, even as source lighting. LED lamps, like tungsten and florescent lights can be dimmed but they go one step further. Some LED lights can also change color temperature with simple adjustment. This creates a wider range of use for LED lighting in film and video. Many rental houses are just now warming up to LED lighting so you may not find a huge selection but like fluorescents they affordable to own and rent. With the added flexibility of use over other types of lights, the added cost makes them worth the investment.

How: Many productions today are using LEDs in a variety of ways, source lighting, fill lighting, set lighting, green screen or chroma key capture, special effects lighting and live event. From broadcast or wedding cinematography, you will see LED’s everywhere. Also, all types of productions, music videos, short and feature films, documentaries, promotional videos. LED’s are one of the most versatile lights in the industry. However, LED still cannot throw lighting no produce high amounts of lumens so you will not often see them lighting exteriors or large sets… at least for now.

Why: There was a time I swore off LED because you cannot cut or shape the beam throw. The panel style lamps deter you from attempting this so this limited my uses in my productions. But as of the last few years manufacturers are beginning to change the way you can use LED and slowly but surely I’m using more and more of them in my productions. Though still not powerful enough for long throw lighting or exterior lighting LEDs are great for lighting subjects, backgrounds, confined areas such as small rooms and automobiles and particular lighting. The more modern lamps have gotten better at diffusion so they becoming a softer light, matching the aesthetics of florescent bulbs.

I hope you have found this post, as well as all the other posts pertaining to lighting useful. I’ve enjoyed creating and writing this series and hopefully it has given you enough information and tools to get you thinking about lighting for your future productions. As always I welcome your thoughts and comments!