Time to give the GoPro some SERIOUS consideration! 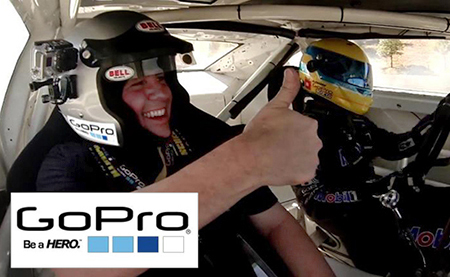 So GoPro had this little “launch event” this week to introduce the new Hero3 to the world and invited a bunch of media folks from all over the globe to San Francisco to take part in it and get a hands-on experience. Little did we know that even included race cars, motorcycles, hot air balloons, jets, catamarans and diving with sharks! It was an amazing experience to get a real feel for what the GoPro can do, so let’s take a closer look at the Hero3… 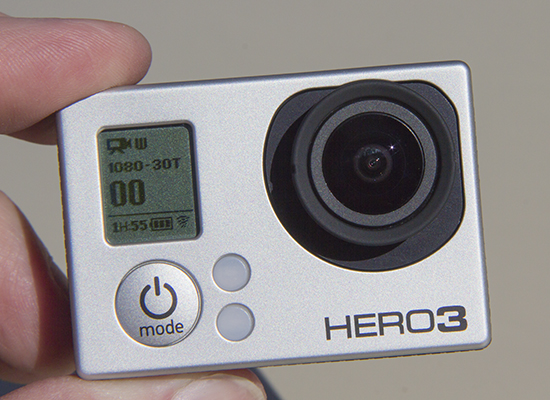 First of all, this amazing new camera is completely redesigned from the ground up… about 30% thinner than it’s predecessor, the Hero2. And with an improved sensor that gives 12MP still images and up to 4K video @ 15fps, and the new anamorphic glass lens is beautifully sharp and has less barrel distortion. There are really so many enhancements in this camera that I’m going to have to break this review into two parts, just to get enough comparison data and hands-on examples to cover it all. But first, let’s take a look at the Hero3 and some specs:

GoPro will be discontinuing production/sales of the legacy cameras (though still supporting them and the accessories, of course) and will now be offering three different versions of the Hero3: Black Edition ($399), Silver Edition ($299) and White Edition ($199)

The Black Edition features 12MP stills, several video rates up to 4K/15fps, 2.7K Cinema (17:9)/24fps and increased 1080p/60fps and 720p/120fps, a glass lens and Simultaneous video+photo capabilities up to 45/Mbs. This is truly a big leap in quality and capabilities for the GoPro line. The Silver Edition is capable of 11MP stills, 1080p/30fps and up to 35/Mbs. The White Edition delivers 5MP stills, 1080p/30fps and up to 15/Mbs. There are complete comparison and camera specs on the GoPro website.

While all 3 editions have varying levels of capabilities, they all have built-in Wi-Fi, are Protune capable and accept the same accessories, but only the Black Edition comes with a Remote. This is the same Wi-Fi Remote that GoPro recently released earlier this Summer, so if you have one with your Hero2, it will work with the new Hero3 cameras. I did however, find it difficult to pair up my Wi-Fi remote to both a Hero2 and Hero3 simultaneously, but that may just be operator error on my part.

And of course, the Hero3 works great with the new iOS Wi-Fi App with your iPhone and iPad! Be sure to see my review on the new mobile app here on ProVideo Coalition

The Hero3 with the iPad Wi-Fi App

You’ll notice a lot of changes in the Hero3 over the Hero2, and I’ll be doing a follow-up review showing detailed comparisons not only in the product itself, but in side-by-side shootouts.

Physical Features of the Hero3

One thing I noticed right away (besides the smaller size) are the nice large power/trigger buttons. They’re easier to press, even inside the water-poof housing. That means fewer missed shots (for me at least!).

The Hero3 power/select/trigger buttons are much improved

The new 3.7v 1050 mAH li-ion battery is easy to access and pop-out/replace with a freshly-charged one (for about $20 ea)

The data connection/card slot door is located on the side and it’s not attached to the camera body so you WILL LOSE THIS within the first week of using your Hero3. Thankfully it’s not critical if you keep your camera in a clean and safe environment when not in a water-proof housing.

The data door/cover plate is tiny and not attached… so don’t get too attached to it either!

The Hero3 also takes the Micro SD cards, which can hold up to 64GB of data but also something that can get lost very quickly/easily – especially if you’re swapping data cards on location. Forget about trying to remove or replace these cards with gloves on… or with cold/numb fingers!

The new Hero3 water-proof housing is redesigned for better performance as well. A newly-designed clasp that locks in place to avoid losing your GoPro mid-activity (do a YouTube search for “GoPro falls out of case” to see miraculous skydive and off-road tumbles and the GoPro is still recording the whole time!)

It is a bit trickier to open the case (again, probably not possible with gloves on) but using your thumb to slide-over the lock while pulling up on the latch where indicated pops it open. It does stay securely snug when closed.

The Hero3 housing has a locking latch for security

Also, I was very pleased to see the new flat lens cover that’s built into the Hero3 case. This offers less glare and added distortion to your image, as I outlined in my review last year of the Hero2 here on PVC. It’s also better for underwater shots and GoPro only has to manufacture one case now for all exterior applications.

Another new accessory that makes the Hero3 more “studio-friendly” is The Frame – which offers no external protection to the camera from the elements, but gives a good solid mount for doing interior/studio work with a minimal size increase over the camera body. This will really make this more useful for people like me who aren’t necessarily “extreme sports” guys but do a lot more creative shooting in the studio.

The new LCD BacPac is not only brighter (GoPro claims twice as bright) but is also a touch screen for the menu items and settings, as well as playback and review of your pictures and videos.

It works well, but a word of caution when handling your camera when it’s on – if you’re making settings with the front Power button and the Trigger button on top of the camera, it’s easy to accidentally “select” or change a setting with your other fingers touching the screen on the back while handling the camera. My suggestion is to turn off the LCD while making manual settings on the front, or use the LCD touch screen to change your settings.

When you get the Hero3 LCD BacPac the kit comes with a nice carry case (this is great to protect the screen when not attached), as well as several back doors for the housing. One included housing door is a water-proof panel that allows you to still access the touch screen features and still have your Hero3 fully protected.

There are also some new cables and other accessories available on the GoPro website.

Testing the Hero3 in the Field

As I mentioned in the beginning of this article, we had a chance to really put the Hero3 cameras to the test doing some amazing sports activities. I was in the group that went to the Sonoma Raceway and got behind the wheel of an Audi R8 for a few laps around the track and also took a ride in one of the 2-seater Indy trainers (like riding in a jet on the ground) – it was great and we got some fun footage in various conditions and speeds!

But even more thrilling for me – I was selected to do a special ride-along with GoPro sponsored Formula Drift race driver, Tyler McQuarrie, doing a demo for the crowd – see all the the Hero3 footage in this video:

Watch this video to see the Hero3 in action – and yeah, I had a good time as you can tell

I’ve taken the Hero3 into situations where the GoPro tends to fall short at times in various lighting scenarios – setting sun, twilight and night time with artificial light. While the results won’t be comparable to a camera 10x the price, the new sensor with Protune has a much wider dynamic range and handles low-light conditions much, much better and with a lot less noise. Here are a few frames in the examples below (these were right off the raw, unprocessed 1080p/30fps videos off the Hero3:

Stay Tuned for Part 2: Side-by-Side Comparison of the Hero2 & Hero3

See the link below to see Part 2 of this Hands-on review, with several side-by-side comparisons of the Hero 2 and Hero3 so you will be able to see for yourself what the improvements are. Not to put down the Hero2 in any regard, as with the latest firmware update by GoPro in early October, the Protune capabilities and 35Mbs data transfer rate have given the Hero2 new life!