On Saturday, May 13, Koerner Camera hosted the PNW Lens Summit 2017, gathering glass from all over in one place for our viewing pleasure. 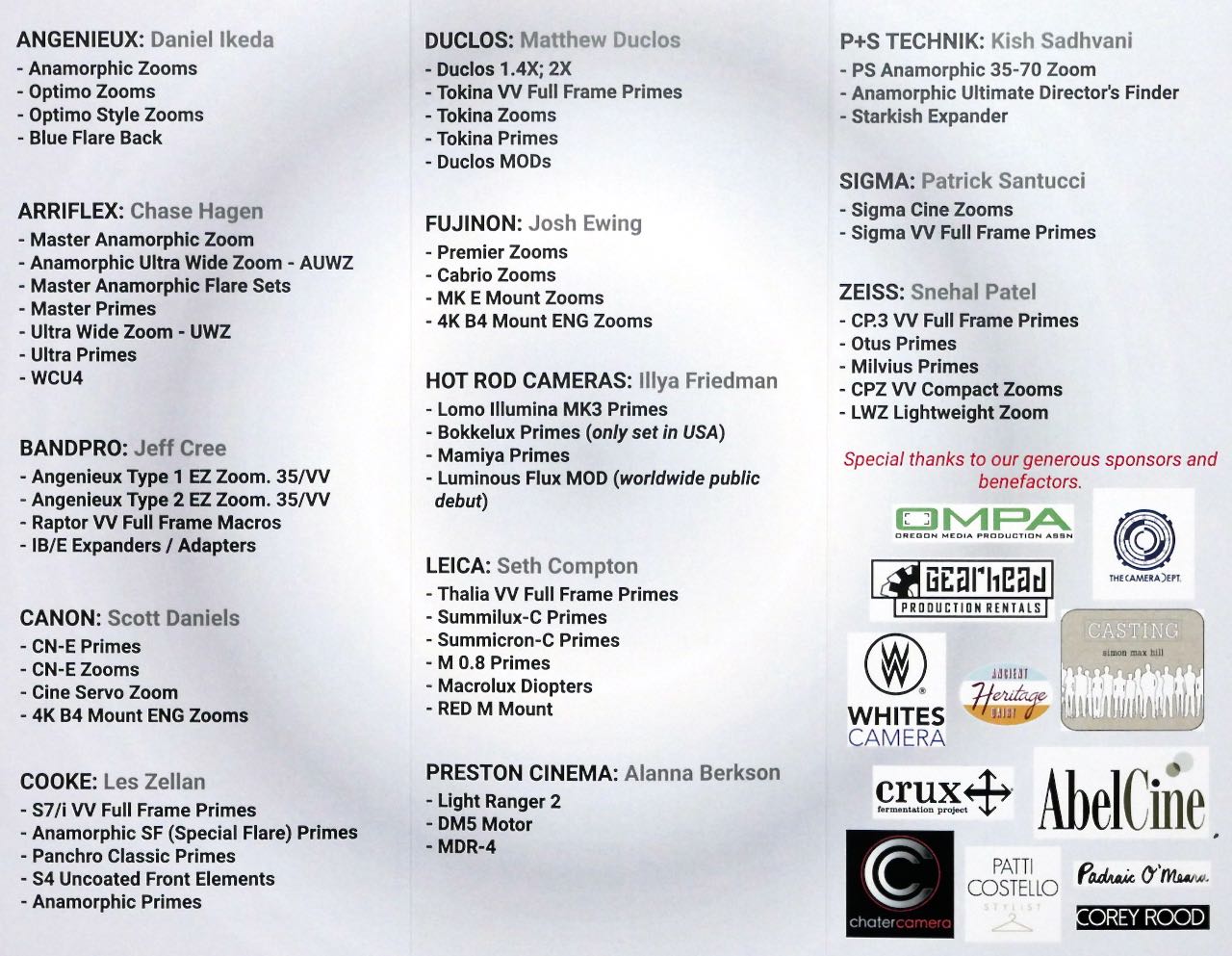 Lens-test charts were pulled from their overhead rails in all the prep bays, making room for models, handy fresnels for causing flares, and a string of Christmas lights for background bokeh testing. ARRIs, REDs, Canons, a broadcast cam or two, and several Sony A7s hosted a wide variety of spherical and anamorphic primes and zooms: coated, uncoated, and specially modified for interesting flare.

There was one of the longest lenses I’ve seen: a Canon 50-1000mm s35mm zoom with a 1.5x extender built in, coupled to a Duclos 2x extender to give a 3000mm perspective on buildings more than a mile away across the river or an osprey nest in a cell tower some 550 feet distant.

There was the longest short lens I’ve ever seen: an Arri 2x anamorphic 19-36mm ultra-wide zoom, with an absurdly extended barrel for such a short lens and a ridiculously rectilinear image for such a wide-angle anamorphic zoom.

There were metallic gray Angenieux EZ zooms, flexible little beasts with easily swapped PL, EF, and E mounts. “Now how much would you pay? But wait, there’s more”: the rear group can be switched out to convert the Super35mm 30–90mm T2.0 to a full-frame 45–135mm T3.0, or the 15–40mm T2.0 to a 22–60mm T3.0. These lenses, a cooperative venture by Angenieux, BandPro, and an unnamed Japanese manufacturer, are starting to ship — but the first year’s production run is already sold out.

There was a full lineup of the new Sigma FF cine primes and cine zooms. There were the only two Bokkelux primes in the country. There were Lomo Illumina Mk3 lenses (same optical designs as previous Illuminas, but all-new mechanics). There was a very compact P+S Technik 35-70mm T3.2 PL-mount 1.5x anamorphic zoom. There was the Preston Light Ranger 2 — a focus-puller’s best friend.

You could easily spend all day (I did) and not see everything on offer (I didn’t). To sustain you, Koerner offered donuts, a taco truck, local brews, wine, and cheese. To entertain you, there was the Unipiper: the only kilted, unicycling, flamethrowing, bagpiping Darth Vader you’re likely to encounter in this or any other galaxy. 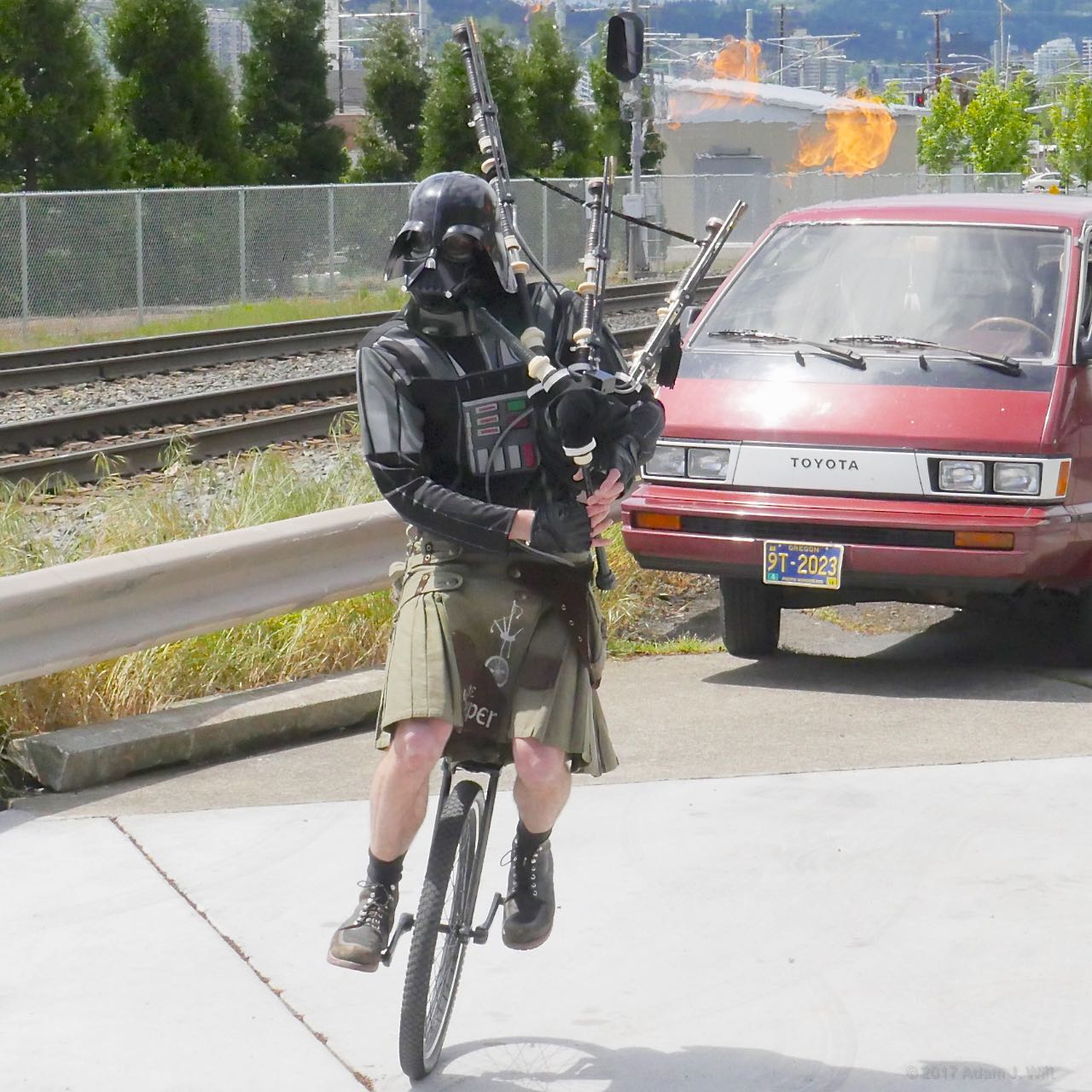 For soundtrack, LPs from Koerner’s library were spun on the two-turntable DJ console in the checkout bay. And, at no additional charge, Portland provided a selection of local weather: rain in the morning, sunny in the afternoon, topped off with a vigorous hail/sleet storm. Truly, there was something for everyone.

Photo gallery follows; click or tap any thumbnail to display as a slideshow:

Disclaimer: Nobody paid me to write this, and there’s no material connection between me any any person, company, or lens written up. I didn’t even get any free food or drink; I was too busy looking at glass.