With all three halls at the Las Vegas Convention Center in full swing for NAB, attendees often find themselves totally exhausted by the end of each day. Between attending seminars, visiting with exhibitors and discovering new products and technologies, many people just want to go back to their hotel rooms after the show floor closes for the day. Of course, anyone who does so is missing out on an essential part of the NAB experience, such as the MediaMotion Ball.

The MediaMotion Ball is produced entirely by unpaid volunteers from the International Media Users Group (IMUG). They run it as a not-for-profit event as a way to give back to the production community. MMB was created as a rare opportunity for people in the digital community to get together in-person and meet face-to-face, and there’s simply no better place to do it than at NAB.

We caught up with MMB founder Carey Dissmore to talk about what he’s looking forward to seeing at NAB this year, why the person-to-person aspect of the event is more important than ever, what sort of feedback he’s gotten from attendees of previous events and plenty more.

ProVideo Coalition: NAB 2015 is upon us…what are you most looking forward to this year?

Carey Dissmore: First and foremost, I’m looking forward to connecting face-to-face with my industry peers and the makers of the software and hardware tools I use in my production business. Beyond that, I am eager to see new products being announced. Personally, I look at cameras and rigs, lenses, lighting, video post and color software, vfx and mograph tools and plugins, of course storage solutions are something everyone needs, and I’m no exception.

There’s often a particular product, company or technology that stands out at every NAB. Any predictions on what might stand out this year?

Well the last several years we’ve seen a lot of interesting developments in the industry, especially with new entrants into the camera category. That was especially the case last year. But this year, it’s hard to say…will there be another round of breakthrough cameras? Or will software tools get all of the attention? Now that 4K cameras are pretty much the “norm”, one thing I am definitely hoping to see is a greater range of choice for 4k monitoring across a range of budget levels.

How have you seen the event change and evolve over the past few years?

Speaking of the NAB show, I’ve been attending since the mid-90’s. I’ve seen it change a lot. I’ve seen non-broadcast applications surge. I’ve seen the importance of the south hall—where all of the desktop and democratized tools of video tend to be—grow tremendously in overall market share and importance across the show. Along with that transformative shift has been a bit of a demographic shift in who attends. Don’t get me wrong…the “suits” are still there, but there are a whole lot more casual-dressing, independent production people at the show than there ever used to be. This is definitely reflected in the booths and messaging from the vendors.

As an industry, do you think we put too much emphasis around what’s “new” at NAB at the expense utilizing tools or technologies to the fullest degree?

I’m not going to lie, new products, new categories even, and surprise product introductions  tend to steal the limelight, but as a working professional, often what I really need are the refinements to my existing toolset. Often, it’s those sorts of things like software and firmware enhancements, or new plug-ins–the sorts of things that you can put to work immediately–that can have the greatest impact on your day-to-day production life. Most folks in the business only re-tool their major hardware every few years, whereas we’re continuously updating software and firmware in our established toolsets. The trade show gives you a chance to get exposure and hands-on with those new products and start the conversation about re-tooling. Those discussions often continue online for weeks and months before the products actually ship!

With so much of the “news” at NAB being made widely available, do you see attendees placing more of a focus around the face-to-face aspect of the event?

Most definitely. In my opinion, the greatest aspect of trade shows like NAB–and why they are so important–is face-to-face interaction. Someone seeking information only is probably better off surfing the web for it. But it’s only through face-to-face interactions that you can come to realize–as big as the NAB show is–that this business is built on relationships. Real people make and support the tools of our trade. I think there is no substitute for live, in-person, human-to-human connection and networking as a necessary component of success in this industry.

Speaking of which, the MediaMotion Ball was created specifically to focus on bringing together people in our industry to allow them to interact face-to-face. Have you seen that element of the event become more prominent over the past few years?

Yes…without a doubt. Every aspect of the MediaMotion Ball is designed to foster building and strengthening relationships amongst working professionals in our industry. We interact online 364 days a year, and come together one night per year to meet face to face. The MediaMotion Ball community originated from the IMUG and AE list online communities, and now spans across numerous online communities and social media. The greatest learning is that one’s online community interactions take on much greater depth and meaning when you have met one another in real life. 100 percent of our growth and strength can be attributed to this form of community building. 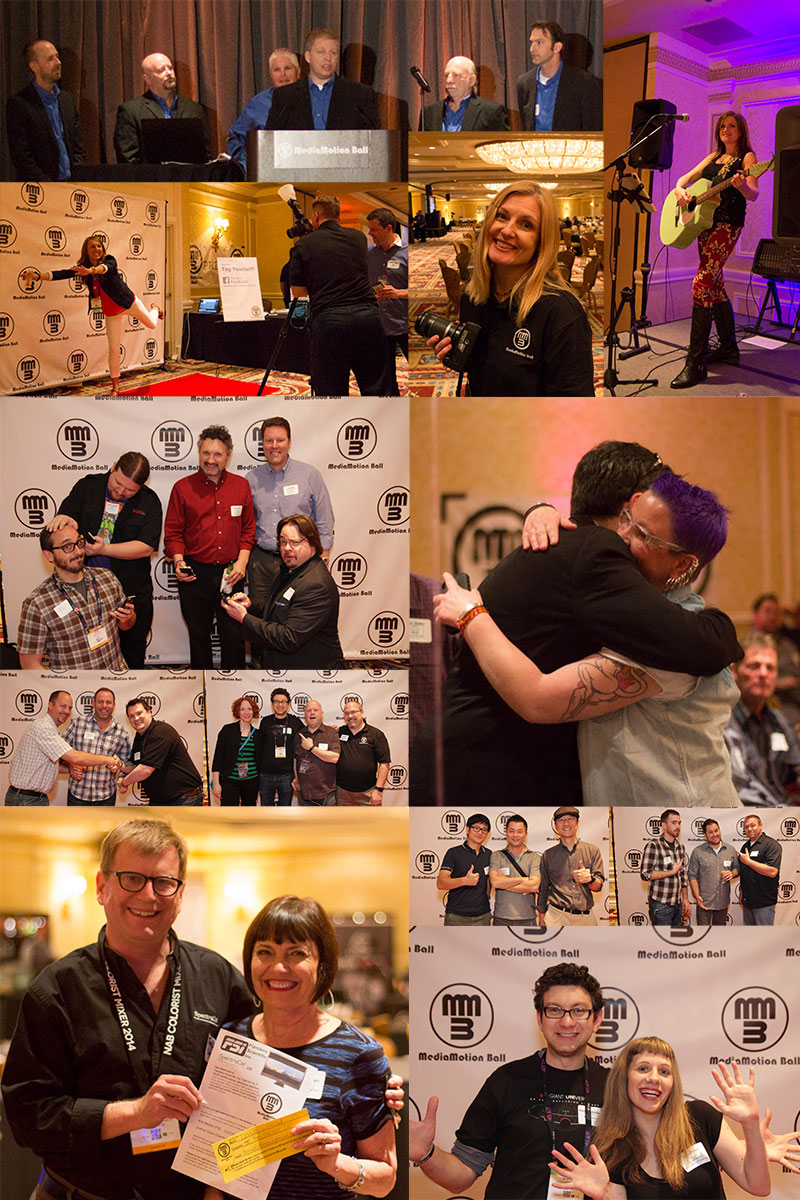 What sort of people attend the MediaMotion Ball?

Everyone who works in production is welcome. We have a pretty wide demographic base of producers, writers, directors of photography, audio engineers, editors, motion graphics, vfx artists and colorists. Overall, our crowd tends to lean a little more to the post production side of things. Our event is designed for users, by users. When you create an event where users want to be, sponsorship support will follow. We feel that is the correct order of things.  We invite a select group of sponsors like AJA, Maxon, Blackmagic Design, Red Giant, Flanders Scientific and Video CoPilot amongst many other toolmakers to participate in our event, and they help subsidize our costs for this non-profit event. We look for sponsors who really “get it” when it comes to community. We encourage our members to engage with these sponsors who make our tools. When that happens, our tools get better.

As a result of our approach, we tend to attract a guest list that reads like a “Who’s Who” of the industry. The MediaMotion Ball is just such a wonderful coming-together of amazing, talented people…a chance to rub shoulders with your peers in the industry and form those bonds that last for many years. 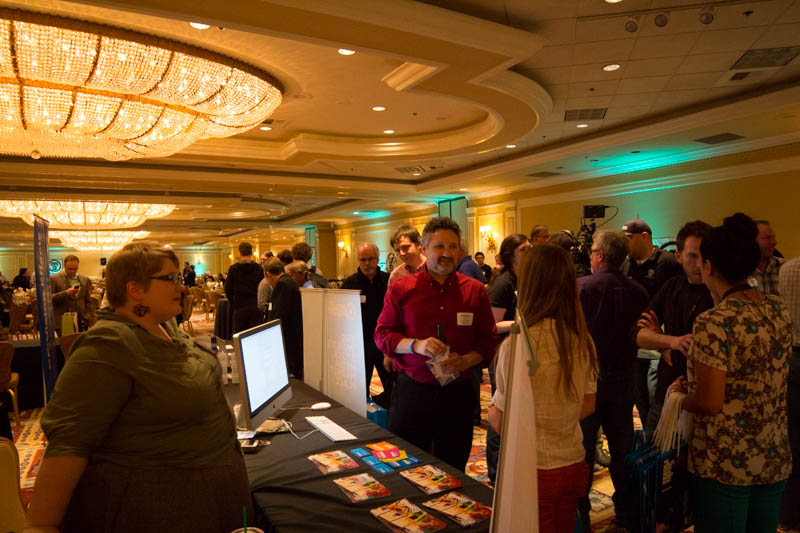 Do attendees use the opportunity to connect on a personal level, or do you see a lot of people discussing and developing concepts and ideas?

The MediaMotion Ball itself is all about people making personal connections within our industry. Many times we learn of professionals who met each other via the MediaMotion Ball, who then go on to collaborate on video projects and create amazing things together. That’s what it’s all about!

What sort of feedback have you gotten from attendees in previous years?

One of my favorite things is to hear a first-time attendee remark on how welcome they felt. They showed up not knowing anyone and within minutes felt like they were hanging out with old friends. We hear again and again that it’s all about the people, and networking. The MediaMotion Ball is a warm and welcoming place where video pros can come, share a great meal, handshakes and hugs. There’s a lot of love and respect amongst peers in the room. Experiencing this is tremendously gratifying and is why I and the rest of the IMUG team do this. The other thing we hear is how great the food is. We seem to be one of the only events that puts on a full sit-down dinner with wine, desserts and table service. Many of us are NAB veterans, and we know just how valuable that is! 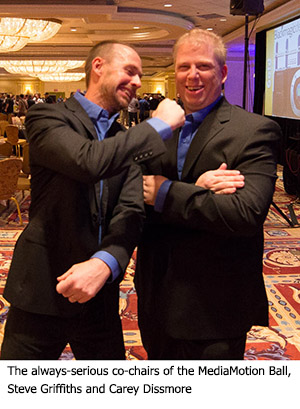 What are the key details that people need to know, and where can they sign up to attend?

The MediaMotion Ball features a relaxed sit-down dinner, cash bar, many prizes, live music and great dessert. Plus a bunch of super creative people to talk to.

Our sponsors will also have tables where you can ask about their products.