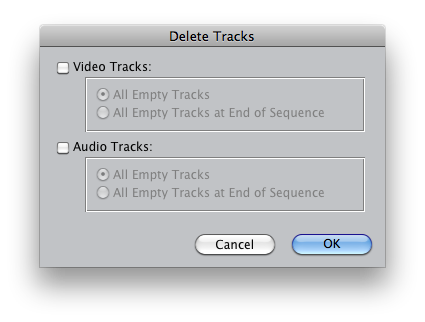 When I’m working I’m always in a constant state of awareness about how I can change my keyboard mapping to make my workflow faster and more efficient. The keyboard manifesto argues that changing Final Cut Pro’s default keyboard mappings can make your editing faster and more efficient. But it’s also important to be aware of changes that you might make. I never would have expected a couple of keyboard changes to cause me an hour of confusion and rebuilding a timeline but that’s what this FCP bug did.

As I’ve been working on this multicamera concert for the last few weeks I’ve realized that I’ve been using the Delete Tracks (Sequence > Delete Tracks…) command quite a lot. I have many different edit sequences for the songs in the show and as I begin to hone in the edits I’m collapsing multiple video layers into one or two video tracks. With that I was constantly grabbing the mouse to choose Sequence > Delete Tracks… from the pulldown menu. I decided to map that to a keystroke.

I thought this was a bit odd since the default duplication command in the Macintosh finder is command + D. When I looked at what was mapped to command + D in Final Cut Pro I was surprised to see that it is a blank key: 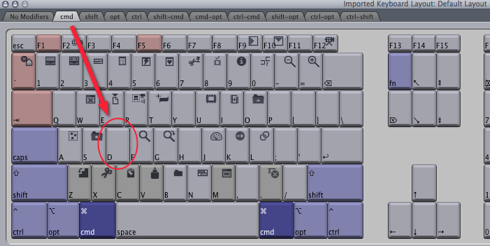 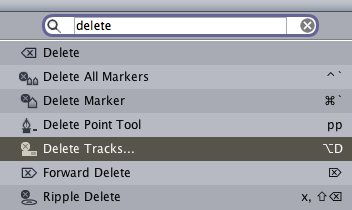 When I went back to my edit I realized that two of my video tracks were gone. After a lot of head-scratching and troubleshooting I discovered what had happened. Instead of Final Cut Pro bringing up the Delete Tracks… dialog box (which is supposed to happen with any FCP command that is followed by an ellipsis … meaning that after choosing the command a dialog box will pop-up requiring action) the application was deleting the currently targeted video track. It deleted two of my video tracks as I executed the option + D command twice from the keyboard.

Once I realized this I began experimenting. It seems like whenever you map the Delete Tracks… command to any keyboard combination that includes the option key then FCP will delete any of the Destination video or audio tracks that are targeted with a connection in the FCP Timeline patch bay:

If your Source / Destination target is unconnected then it won’t delete the track. I tried this on two different FCP installs, mapping Delete Tracks… to various option + other modifier keys and it happens on every mapping combination on both machines. Map Delete Tracks… anywhere else and it brings up the Delete Tracks… dialog box:

Is this a bug? Seems like it to me. Is this an intentional function that’s documented somewhere in the FCP user manual? Maybe … but it’s not documented in the Deleting Tracks section of the user manual. Is there some plug-in or add-on installed on both of my edit system? Possibly. If there’s official word somewhere about this oddity please comment below and let us know. I think the moral of the story here is to be careful when doing deep keyboard mapping in Final Cut Pro as you might get an unexpected result. I’ve mapped a large portion of my FCP keyboard away from the default and have never seen anything like this. In the end I mapped the Delete Tracks… command to control + shift + F2. With that I found a while row of empty F keys just waiting to be assigned to something!