Learn how to seamlessly move footage without wasting time or disk space.

Getting your footage from Final Cut Pro to After Effects is a very common workflow. In fact, so many people choose to work this way that there are several free and for sale workflow tools on the market. While the task may seem as easy as a batch export, there is often precious metadata and organizational work that you’ll want to take from Final Cut Pro into After Effects.

These techniques are excerpted from my new book – Video Made on a Mac: Production and Postproduction Using Apple Final Cut Studio and Adobe Creative Suite. In it, Robbie Carman and I explore several workflows and techniques for getting more done with software from Apple and Adobe. Let’s take a look at a few workflows you might employ.

The Power of QuickTime and XML

What makes all of these exchange options are two shared technologies – QuickTime and XML. The first one is easy, Final Cut Pro captures QuickTime natively, After Effects can also read pretty much any file type using the QuickTime architecture. Just be sure to install any special codecs on the After Effects machine if using proprietary codecs like ProRes.

You can also export an XML file from Final Cut Pro, which can then be used in other applications to bring in clips and data. This allows you to easily import a sequence and its media into Premiere Pro or After Effects. This workflow avoids any duplication of media while preserving edits, footage handles, and sequence organization.

The first step in moving from a Final Cut Pro timeline to an After Effects composition is XML. This process is very straight-forward (but differs slightly depending upon which version of Final Cut Pro you are using). While making an XML file involves a couple of steps, it’s pretty straightforward. 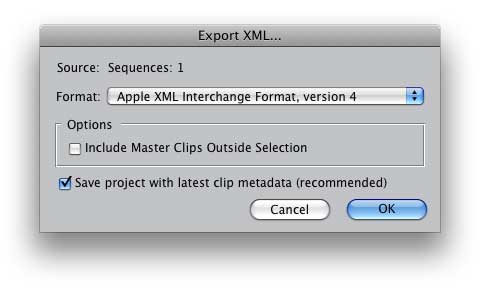 That’s it (and the process is so quick that you might think you missed it). Let’s put that XML file to good use.

A lot of folks have taken the plunge and purchased a Creative Suite bundle from Adobe. If you have Premiere Pro CS4 installed on your system, you can get a clean handoff to After Effects by taking a jump to your left and then a step to the right. You can choose to send a full sequence (or just part) to Premiere Pro and then bring those clips into After Effects.

If you need to make any touch up edits go ahead. To make the process easier, choose Edit > Keyboard Customization. Choose Shortcuts for Final Cut Pro from the Set menu and click OK. 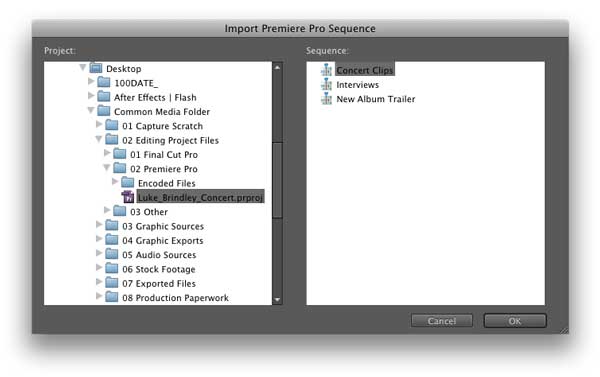 If you need to import a whole project, you can do that too. In After Effects choose File > Import >Adobe Premiere Pro Project to bring in an entire collection of footage, bins, and sequences. All the media (with handles) is now imported into the After Effects project. This works well as you can import multiple Final Cut Pro XML files into one Premiere Pro project.

You can also move media from Premiere to After Effects with just your computer’s clipboard. This method relies upon a lot of “under the hood” integration between Premiere Pro and After Effects.

We found that most features translated cleanly (including some time remapping). However, not all opacity keyframes came across correctly (but motion ones did). Dissolves also did not translate in our tests.

Direct Import of XML into After Effects

While its not supported directly, you may want to migrate media between Final Cut Pro and After Effects without using Premiere Pro. Fortunately XML is very flexible and there are third-party tools that allow this. 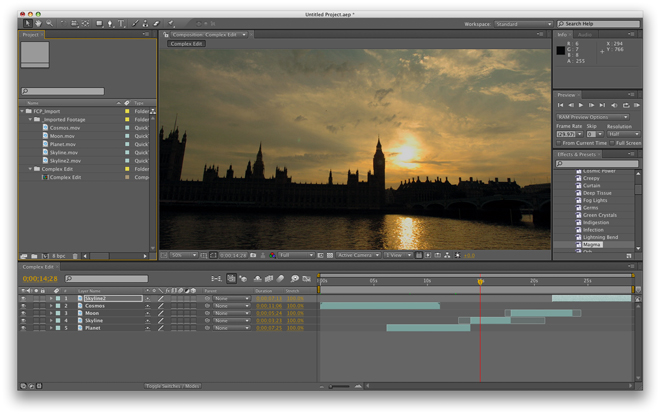 Free methods. We recommend downloading either of these After Effects scripts:

Paid method. If you need to move media between Final Cut Pro, Avid, and After Effects, Automatic Duck has workflow tools for you. Its solutions aren’t cheap, but they exchange much more than standard XML. You can hand off multiclips, keyframes, motion properties, markers, and even data between many third-party filters. You can find out more at www.automaticduck.com.

The bottom line is that cuts and basic properties like Scale, Position, and Opacity can be easily translated to After Effects. Your footage can be easily swapped with edits (and handles) in place. These techniques are much more efficient than media managing large projects and unnecessarily duplicating media. If you do need to bundle up a project to send it off your network to another user, just use the Collect Files feature in After Effects.

Also, be sure to check out the new book, Video Made on a Mac.  More than 400 pages and 5.5 hours of video on Production and Postproduction Using Apple Final Cut Studio and Adobe Creative Suite. 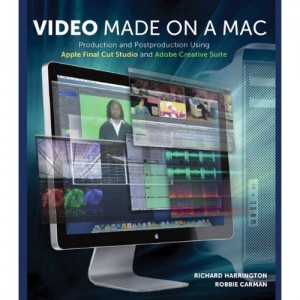