Over the years I have made many one off scripts. Each project brings it’s own challenges and it’s need for solutions. These challenges at times were repetitive enough that I did not want to deal with them manually by hand every time. In some cases, I didn’t have the time to do it manually with a fast deadline approaching. Coding a quick script would resolve an issue here and there. It proved more valuable to spend time coding, if it was gonna save time in the long run. Some of those quick scripts would eventually make their way into a full fledged script with UI as they became a more frequently needed tool. Fast Marker Creator was one of those scripts. 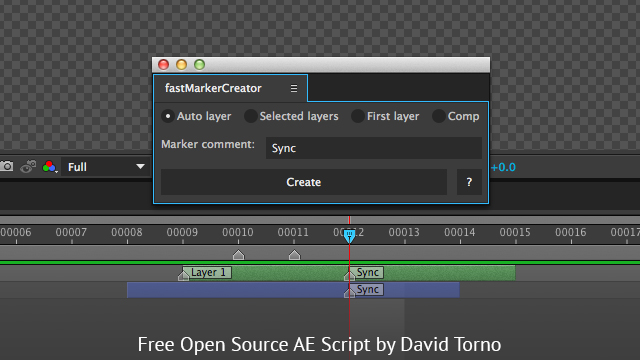 Over the sixteen years that I’ve been working on visual effects, most projects I had were shot based. Surprisingly it wasn’t until recently that I started using layer and comp markers heavily. I never really had a need for them in a large enough capacity previously, but once I did, I immediately started figuring out how to script them. In a shot based project, like feature film, you have a decent amount of compositions that are each dedicated as it’s own shot normally. In my case I usually have those comps sequenced in a master composition for easy review. Most times they are also synced to a flat edit reference quicktime of the scene so they can be reviewed in context as well.

For these master compositions I would make tons of notes during the preliminary ingest of clips that had issues like missing frames, speed ramp mismatches, reposition data that didn’t carry through from edit, etc…. Processing this data in a timely matter so work could be started by other artists meant I had to move as fast as possible to find any issues that needed to be corrected by the edit house and re-delivered to us. Fast Marker Creator was born. First it started with just a simple, add marker to layer with a preset comment tag. It then quickly evolved into the multiple options it has today, auto layer, selected layer, last layer, and even composition. All of these options were very helpful for me at different times, and hopefully you will find one or more of the options helpful as well.

This script is being released as open source, so you will get to see the inner workings of it, which could also prove useful for anyone still learning scripting too. Three of the functions built into Fast Marker Creator will look familiar to viewers that are following my Free Function Friday series too. I’ve used the showHideControls(), layersAtCurTime(), and addCompMarker() functions in this script. This open source code also reveals how you can build a dockable panel script for After Effects using a resource string, as well as how to have a control element change it’s visual state when another control has been clicked. This is fairly basic stuff, but can be very helpful for anyone who is starting out and trying to understand how ScriptUI can work.