I often forget this Quicktime Conversion option is available in FCP. 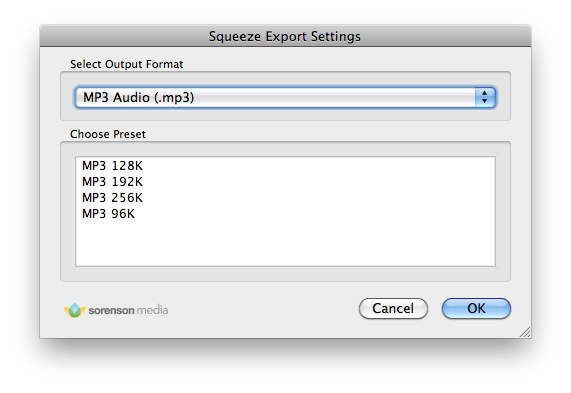 Just the other day I needed to export mp3 audio files from several long Final Cut Pro timelines to send to a client for review. There was no reason to send video and they wanted to get small audio files that didn’t have to be of great quality attached to an email. What better format than mp3! With that I remembered that Sorenson Squeeze 6 (now at version 6.5) installs an Export Using QuickTime Conversion option in FCP. After making the mp3s I thought that a reminder of this would make a good blog post.

Today I saw that Sorenson themselves have uploaded a short tutorial to You Tube that shows just how to do this export. Perfect timing. It’s great to have this option available after installing Squeeze 6 as there’s export options for a number of formats that aren’t supported directly out of FCP, namely things like Windows Media, mp3 and Flash. It’s a very convenient way to use Squeeze and the mp3 exports were very fast. You can also have access to custom presets that you have saved in Squeeze as well though I found that I have to quit Squeeze and Final Cut Pro to have them show up. The only thing that would make the integration better is if Squeeze could do all the encoding in the background. That may be some FCP limitation but boy would that be nice.

Here’s the You Tube tutorial: