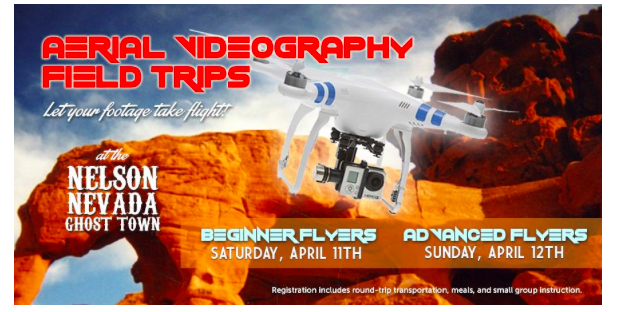 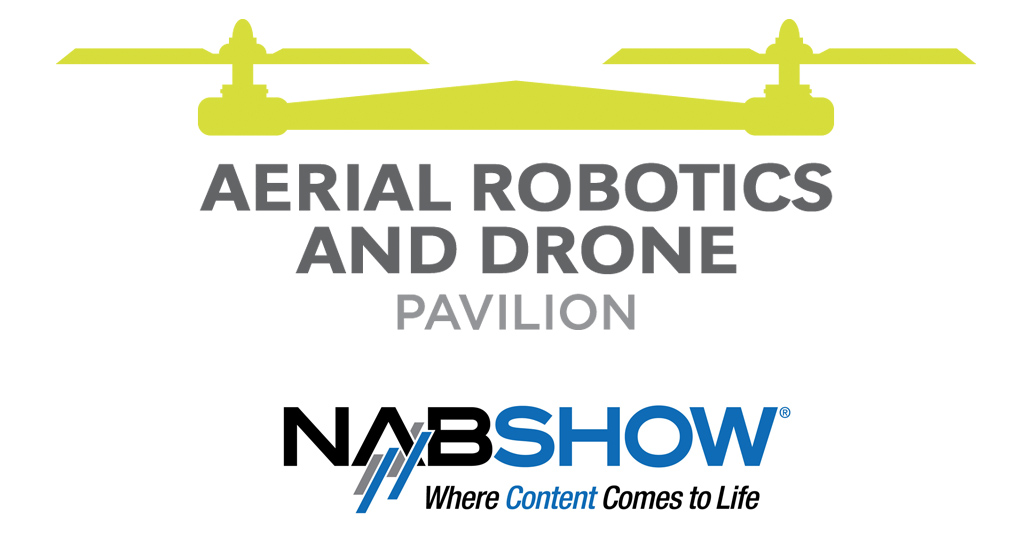 Word about the new Aerial Robotics and Drone Pavilion was just made offical, and even though NAB Show 2015 is still months away, it’s already shaping up to be one of the highlights of the event. It’s set to feature a flying cage, a demonstration area with seating, and daily sessions so it’s no wonder people are already starting to get excited about it. If you want to read the full details, check out the official announcement below.

One of the professionals who’s set to be a big part of the event is Jeff Foster, and he’s a perfect fit as someone who can discuss, demonstrate and showcase just about any aspect of drone technology. Whether he’s running a two day course that allows you to figure out which drone is right for you, filtering-out the facts from fiction and paranoia around drone law or giving us a general guide for aerial photo/video gear that’s currently available, his knowledge and experience around drones is unmatched.

Jeff will be a speaker at the Aerial Videography Field Trip for Beginners Flyers as well as the Aerial Videography Field Trip for Advanced Flyers, and you can sign up to attend both right now. Given his involvement, we wanted to use this opportunity to quickly find out what he’s most excited about as well as what attendees can really expect to see and discover.

ProVideo Coalition: With drones being one of the hottest technologies at NAB 2014, it’s no surprise that NAB 2015 is set to showcase them in an incredibly powerful way with the Drone Pavilion. What is it about the technology that has spurred so much interest?

It’s mostly about the POV that only a UAV (Drone) can acquire that’s the attraction for most photo/video professionals; but when you get down to it, it’s just plain fun and exciting to fly these things! Aerial videography is just an extension of the tool set cinematographers want to use to get meaningful shots for their productions, but we all know that the FAA is dragging their feet on the approval process, so that’s made a lot of broadcasters and studios uneasy about venturing further into this space for the time-being.

What is your involvement with the Drone Pavilion?

I’ve been contracted to be the Program Manger of the Aerial Robotics and Drone Pavilion, NAB Show 2015 – but I’m not running it all by myself, mind you; there is a huge team working this new venue, led by Mannie Frances of Drone Media Group. Mannie and I are also planning and producing 2, full day remote Field Trip Aerial Videography Workshops out in the Nelson, NV Ghost Town on Sat/Sun the weekend preceding the Expo that will help beginners get their first opportunity to fly a drone, as well as show existing aerial videographers how to take it to the next level with more advanced gear and new technologies.

Will the Pavilion cater to novices drone users? Or experienced flyers?

There will be a lot of representation from manufacturers large and small at NAB Show 2015 this year – many focused on the smaller, entry-level craft that most anyone can fly. But we’re also set to include new technologies and the larger professional gear in the Drone Pavilion – including live flying demonstrations and important topical presentations in the 90+ seat Fly Cage Demo Area. There will be something for everyone represented on display here, as well as in the demos. 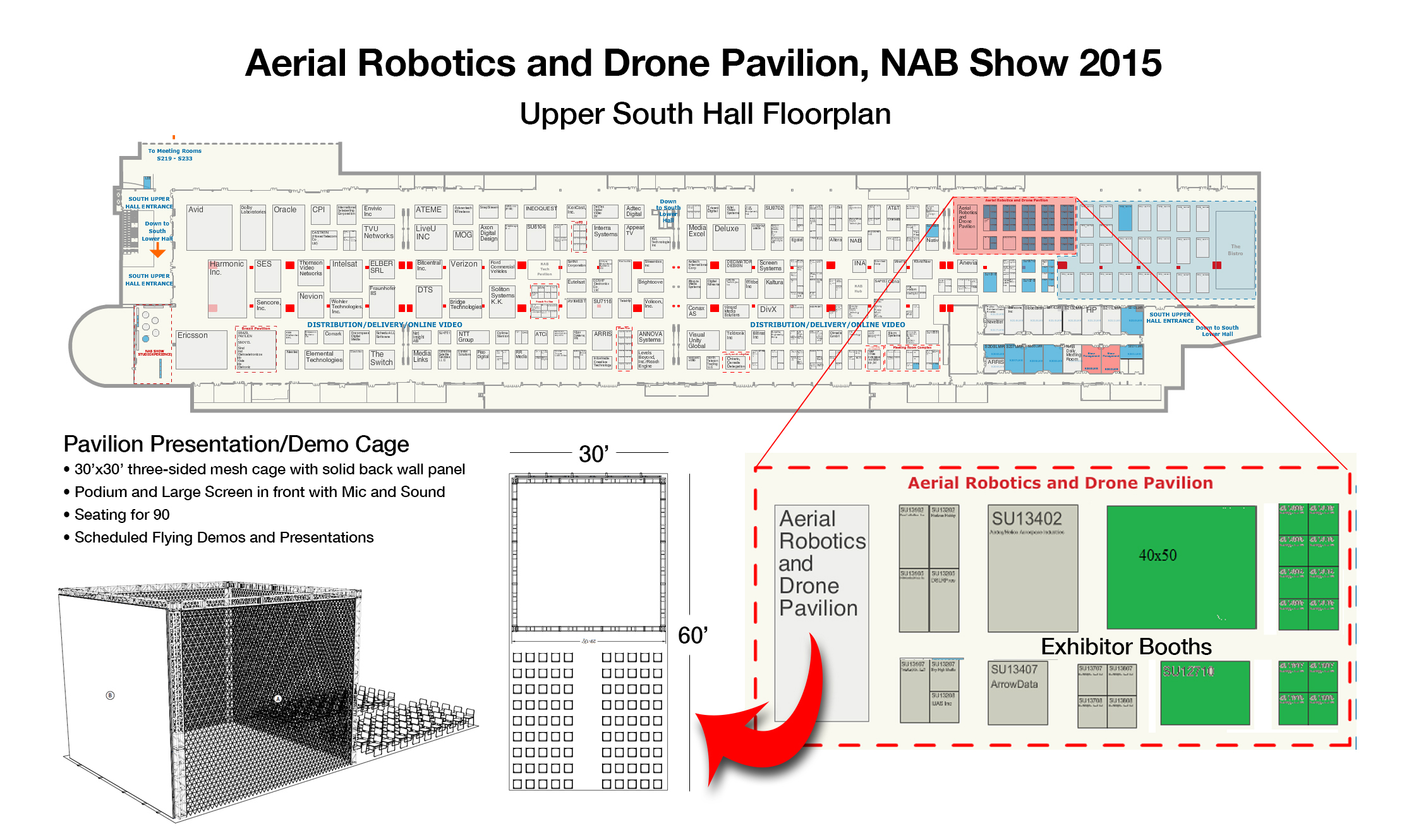 Which of the daily sessions are you most excited to check out/be a part of?

Well, that’s a tough question – especially since we’re still fine-tuning the demo/presentation schedule currently. I’m going to be there pretty much all day/every day of the show and am excited to see the response we have already from the exhibitors and industry pros signed up so far. Each day we’ll have a mixture of product demos from companies such as DJI, DSLRPros, Canon, Amimon, Parrot and others – to informative presentations and panels from FAA Regulatory experts to using autonomous flight software and much more. We’re building a live scheduled program that will give people a reason to attend the Pavilion at least ONCE every single day of the show.

What do you expect visitors to the NAB 2015 Drone Pavilion will be talking about at the event and long after?

All the new technology, of course! It should be a destination spot for anyone interested in aerial videography – to both learn and experience what the industry has to offer, as well as a look into the future.

Here are the links to register for the workshops…

And here’s the official Press Release…

The Pavilion is sponsored by DJI Innovations, a worldwide leader in unmanned aerial systems and media acquisition technology.

“Unmanned aerial systems are increasingly being used to cover live events and breaking news, and in industries such as real estate, law enforcement, search and rescue, and more,” said Mannie Frances, Drone Media Group. “Drones were one of the hottest technologies at the 2014 NAB Show. We are excited to unveil the Aerial Robotics and Drone Pavilion in 2015.”

About NAB Show
NAB Show, held April 11-16, 2015 in Las Vegas, is the world’s largest electronic media show covering the creation, management and delivery of content across all platforms. With 98,000 attendees from 159 countries and 1,600+ exhibitors, NAB Show is the ultimate marketplace for digital media and entertainment. From creation to consumption, across multiple platforms and countless nationalities, NAB Show is home to the solutions that transcend traditional broadcasting and embrace content delivery to new screens in new ways. For complete details, visit www.nabshow.com

About NAB
The National Association of Broadcasters is the premier advocacy association for America’s broadcasters. NAB advances radio and television interests in legislative, regulatory and public affairs. Through advocacy, education and innovation, NAB enables broadcasters to best serve their communities, strengthen their businesses and seize new opportunities in the digital age. Learn more at www.nab.org