If you’re a Media Composer editor looking to add After Effects to your editing toolkit, this first of a two part webinar series is a no-brainer!

I’m always surprised with I talk with Avid Media Composer editors, and I ask them about how much the use Adobe’s After Effects.  I think the main reason that I ask that After Effects (AE) has been entrenched in my workflow for over 15 years, I’m always curious to hear how other editors use it in the their day to day work.  I’m always stunned to hear that most editors that I talk to, don’t use After Effects at all and, for me, that’s a pretty disturbing thought.  I’m a big fan of having motion graphic artists doing what they do, as they are experts at it, but the fact that most MC editors don’t use AE, is just a way for them to lose jobs to editors who might have less experience than they do, but more of an AE knowledge as well.  Since I started doing online training, I’ve always pushed editors to try to learn outside of their comfort zone, and AE has always been one of those subjects.  This is the main reason that I wanted to team up with Moviola, to do a webinar on After Effects for Media Composer editors.

When the original discussion of doing the webinar came up, it was going to be just a single webinar to give MC editors a quick “Bootcamp” on After Effects, but I was quickly asked, since there was going to be a ton of content, to break it up into two webinars.  Once that was decided, I had to figure out what I wanted to talk about, as trying to show people how to use AE in an hour is a pretty daunting task, so I decided to take a different approach.

There are a ton of places to learn how to work in After Effects, so I didn’t want to do a webinar on how to create text, or how to add effects to elements, as it’s information that can, again, be found from a ton of different sources.  So I decided that I wanted to create a webinar that would get specific about the tasks that can really make or break your entire project, and that is importing and exporting.  Why these topics?  If you make one mistake, one simple and tiny mistake, you can screw your project up, and never even figure out what you did, so you can go back and fix it.  This is why these two subjects are crucial, and the core of the two webinars.

In the first webinar on importing, we start out in Media Composer, and focus on just getting your timeline out to work with in AE, and we cover three main ideas:

The last topic is probably my favorite, as it takes me back to one of (for me, at least) the most unbelievable tools every released, and that was Automatic Duck Pro Import for After Effects.   In a nutshell, a tool for After Effects that let you import OMF exports (linked video and audio) from Media Composer into After Effects. 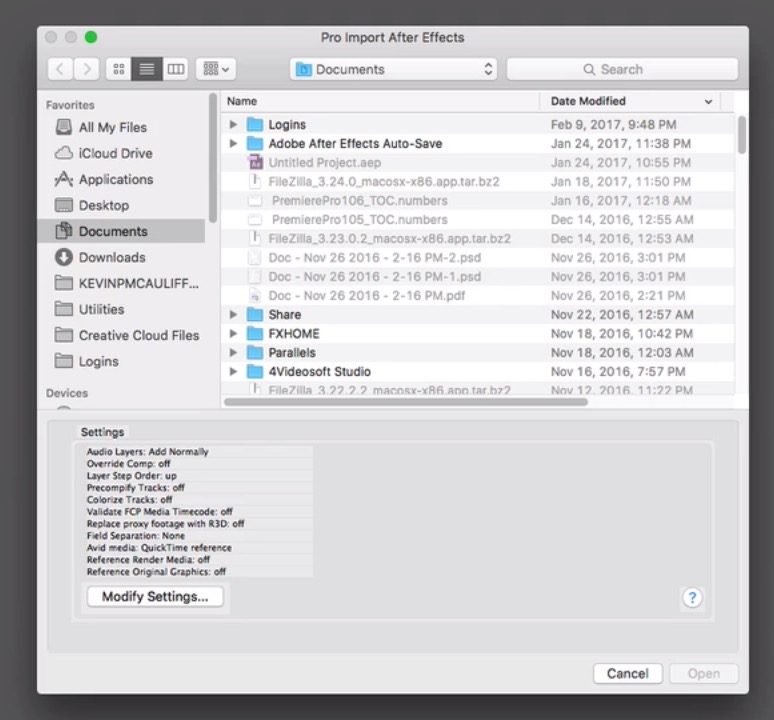 Essentially open you Media Composer timeline in After Effects.  Well a few years ago Adobe purchased Automatic Duck, and implemented the technology into After Effects, so there is no need to purchase a third party tool to do the work with.  These three core topics, plus some important After Effects tips, tricks and techniques are the core of my Moviola webinar “After Effects Bootcamp for Avid Editors” that you can check out at the included link.  Enjoy!