Will a printer that does only one thing save my sanity?

For quite a while I’ve used an Epson R320 printer to label my showreel DVDs, but the end of that era has come. I now own a Dymo Discpainter.

Lately my life has been about getting things out of the way that cost me needless time and effort. About four years ago I ditched Windows XP for a Mac specifically for that reason. I’d run Windows since version 1.0, and although I’d become excellent at fixing it I hadn’t signed on to become a one person unpaid IT department for my business. I’d lose a day every month or two to dealing with some bizarre Windows issue, and over time that became intolerable. I still have occasional issues with Macs but they are nothing like the trouble I had with Windows.

I’m about to do a run of new showreel DVDs. I usually run off 50 and get rid of them all, but this time I’m aiming to launch 100 out into the production void. Every DVD that goes out is a chance for more work, so I make them by the dozen and send them out like candy. Thanks to the miracles of Final Cut Pro and DVD Studio Pro I can cut my own reels and burn them, something I had to pay someone else to do only a few years ago. The Epson R320 has done reasonably well at printing on DVDs all this time but it’s not a fast process: it refuses to print DVDs just as often as it does the deed, and I’ve grown tired of continually trying to figure out just the right way to feed it a DVD blank in order to make it happy. On top of that, I just replaced all the ink cartridges only to discover the black one has a problem that no amount of head cleaning will fix. No point in throwing good money after bad…

So Monday I went to Amazon.com and bought a Dymo Discpainter. I’ve had my eye on this baby for a long time but in the past I couldn’t justify the $250-275 for a printer that did what my Epson could already handle. By 2:30pm Monday afternoon I needed an affordable solution that would keep me from going insane while trying to get my reels out the door, and $250 for a DVD printer didn’t seem so bad after all–as long as it worked. (It was $250 for the printer, $50 for an extra ink cartridge and $21 in overnight shipping.)

It took a while to get the thing running. I had to install the software several times on my Quad Intel Mac desktop before the printer came up as “ready” instead of inexplicably busy. Then I tried to print from the latest version of Smile-on-my-Mac’s Disclabel, my DVD label creation tool of choice, which supposedly supports the Discpainter, but I kept getting “incorrect media” messages with no explanation as to what that meant. I finally fired up Discus, the software that comes with Discpainter, and went about replicating my Disclabel design. I finally did, but it wasn’t a fast process. Discus works well with the Discpainter in that the printer will actually print something that is designed in Discus, but the Discus interface is one of the worst interfaces I’ve ever seen. 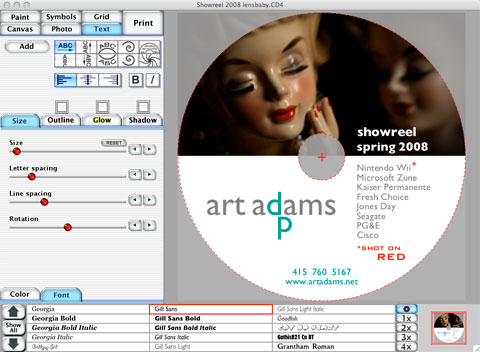 An interface only a mother could love.

The Discpainter itself works fairly well. It’s only a three color printer, which I’d read about in advance and caused me a little worry. It’s disappointing because my Epson had six colors and did a fairly nice job on DVDs when it decided to accept them for printing. I do see a bit of dithering on the DVD face when using the Discpainter but it’s not horrible, and I’d say it’s comparable to what the Epson R320 did for me when it worked. The Epson was a little crisper and a little richer, but a lot more aggravating, which is why it’s now sitting in my closet contemplating its fate.

One other thing I’ve noticed about the Discpainter: it can leave faint inkjet lines in a circular pattern, as that’s how it prints: the DVD spins while the print head remains stationary. I haven’t noticed this on text, but it can be apparent in dark photographs under close examination.

I think the Discpainter will work out well. I like that it does only one thing, and it does that reasonably well. Once I formally introduced it to my Mac and they started talking properly it’s worked flawlessly. I don’t like the Discus design interface but I’ve gotten fairly good at using it in the last few hours that I’ve been printing out test DVDs. My hope is that Disclabel figures out how to talk properly to the Discpainter so I can go back to using that program as I’ve gotten quite used to its quirks.

Supposedly the Discpainter is an ink hog, and I’ll find out about that soon enough. I’ve printed probably 20 test DVDs today looking at differently layouts and ink settings. I’ve got a stack of 100 Taiyo Yuden DVD blanks sitting on my desk and I’ll keep track of how many I go through before having to change cartridges.

Maybe I picked up some of my dad’s depression era cheapness, but I just don’t feel like paying others money to do something I can do myself. I’ve been maintaining my own web site since the mid-90s, cutting my own reel since I bought my first Mac, and I see no need to send out for professionally printed labels when I can print on my own DVDs myself–and spend as much time and money as I feel like plowing through blank DVDs testing layouts. The Discpainter isn’t going to put a professional printer out of business any time soon but for my needs, and until something better comes along at the same price point, I’ll make it work. It does one thing reliably, and for me that’s enough right now.