Unless you were living under a rock last week you most likely heard that Adobe’s Creative Cloud service suffered a major outage. You may have even been affected by it. Or quite possibly you worked right through it using your Adobe apps and never knew it was happening. Maybe you knew it was going on but your Adobe apps hummed right along. I worked right through the whole thing in Premiere Pro CC . I was curious as to exactly who was affected and what those situations were so I took to Twitter to try and find out.

The first thing I learned in this whole outage is that Adobe has a Creative Cloud System Status page that stays up to date with various parts of the Creative Cloud. If you see red then that’s bad. 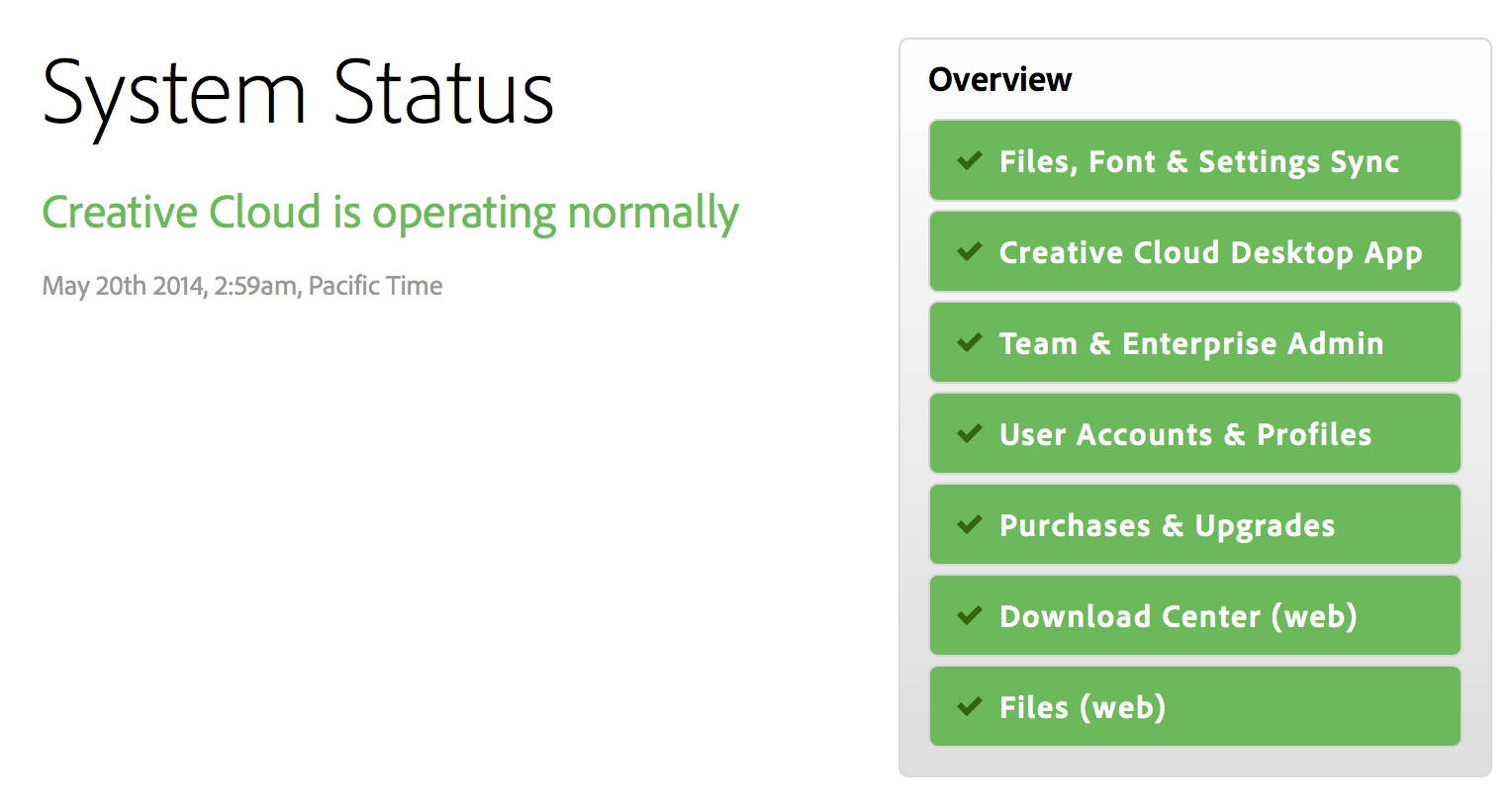 During the outage all that green above was red. Much of the creative community raged.

As I mentioned the outage didn’t affect me at all. While there was a lot of discussion of this happening on Twitter I didn’t see that many folks in my Twitter stream who were having issues with the outage as it was occurring. I was curious who might have been negatively impacted so I put out a call:

How many out there was NOT able to launch & use @AdobePremiere or @AdobeAE during the recent @creativecloud outage?

For most the outage didn’t cause any problems.

@editblog @AdobePremiere @AdobeAE @creativecloud no problems here. 4 Macs all on CC kept right on working. Didn't even know anything was up

@editblog I had no issues during the outage. (I am on a business account with multiple users)

But there were some users of the film and video apps that did have problems.

@editblog @creativecloud if you were logged out and had to log in during the outage, you were denied, #adobe said my eMail addy wasn't real

(Yes the above tweet is from the excellent FCPX Grill podcast but even many FCPXers make use of Adobe products too!)

This response asked the best question:

@editblog @creativecloud I didn’t even notice. But I thought you could use it offline for so many days anyway?

If you were signed in and working then the outage Adobe suffered most likely didn’t cause any issues. It was those who had to log into the Creative Cloud for any reason, be it accessing files, downloading any apps or reauthorizing a computer that saw problems. You can run the Creative Cloud apps on as many machines as you want but you have to log out of one and log in on another when moving from say one desktop machine to another desktop machine. That’s what caught may people during the outage.

And if you needed to download any of the CC apps you were out of luck.

@editblog Got stuck with a new mac I needed that evening without being able to install my Adobe apps. First week of owning CC, great start.

I decided to look beyond my circle of film and video followers and search Twitter for terms like “creative cloud mad” and “#clouddown.” I specifically asked some of those folks what exactly happened and if their apps were working the day before. If they were signed in and had working apps the day before they shouldn’t have been affected by the outage unless something else happened.

@editblog @creativecloud Apps were working the day before. But I sometimes need to log out b/c I need to work on another system off-site.

@editblog @creativecloud I could not open my Adobe Muse project while #CreativeCloud was down. So the 2 nights I had free to work were lost

Knowing nothing about Adobe Muse I had to follow up on that one.

And then there’s the issue of using some of the other Creative Cloud services beyond initializing an account and downloading of the applications.

@editblog Couldn't sync fonts or files or use apps on a different computer. Did apps launch day before? Um…yeah. why?

I think the most disturbing tweets came from those who were somehow unexpectedly and mysteriously logged out of their Adobe accounts through no fault of their own. This is the hardest issue to pinpoint as I’ve never experienced any Adobe apps logging me out without me purposefully doing it myself but it popped up a few times as happening to some others.

@editblog @AdobePremiere Our whole office worked fine. Did have one coworker editing in the field have some trouble. Unexpectedly logged out

Some of these logouts could have been user error but even if you accidentally logged out of your Creative Cloud account the outage wouldn’t let you log back in. 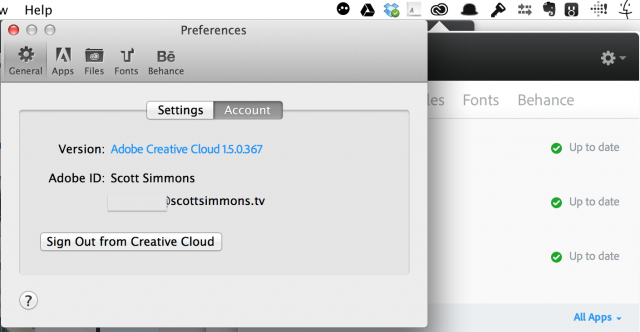 Above is the Preferences for the app that lives in the Menu Bar.

That’s certainly expected but you can also log out via the Help menu in the CC apps. 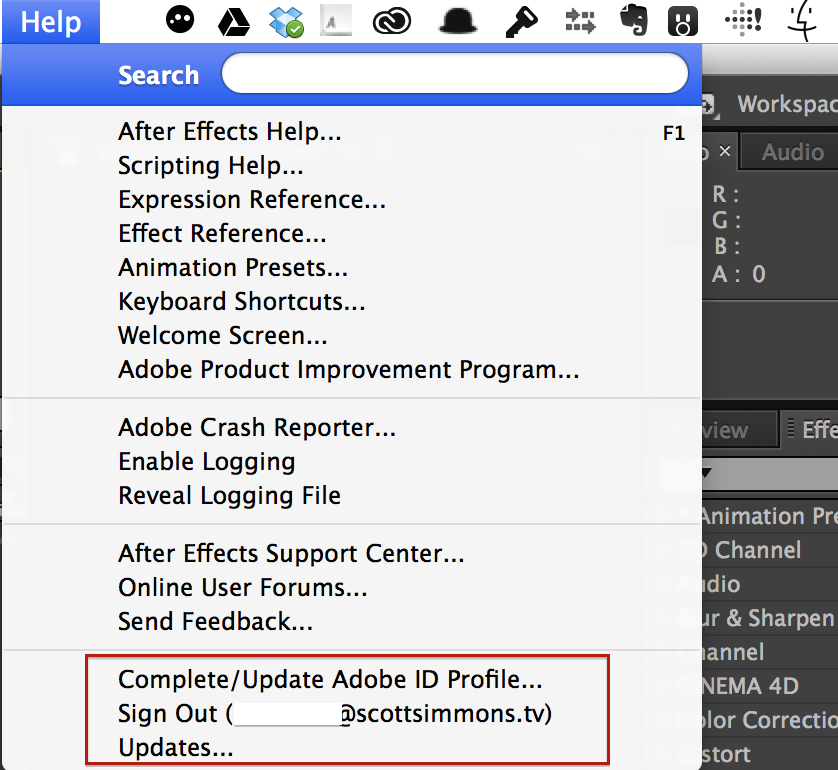 There's also a Sign Out option under the Help menu of the CC apps. Adobe After Effects is above.

Why is this important? Well it seems that while the Creative Cloud outage was happening I was logged out of the CC app itself but still logged in via Adobe Premiere Pro. 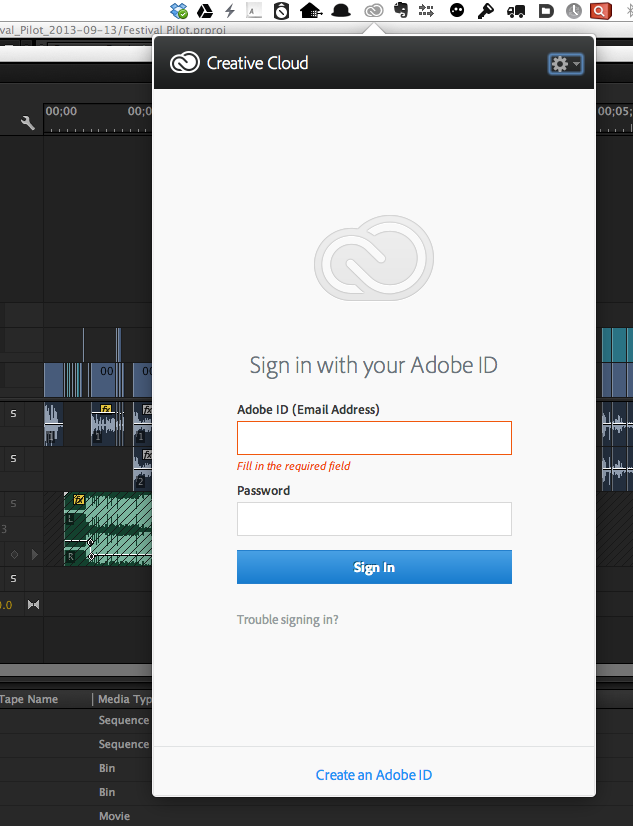 I did not realize I was logged out of the CC app until after the outage was over. I guess I was still logged in via Premiere Pro.

It might be helpful if both of those Creative Cloud login places stayed in sync. But seeing all of the Twitter complaints about the Creative Cloud outage made me wonder why a lot of these people complaining didn’t continue working in trial mode. If you’re signed out of a CC app and can’t sign back in the Adobe Application Manager (ugh, yet another Adobe app to manage our Adobe apps) it might give you the option of using it as a trial (unless you’ve exhausted your free trial period for some reason) but that seems to require a sign in with an Adobe ID as well so that probably wasn’t an option either for many of those affected by the outage. While the outage was occurring Adobe offered up a solution based around the Trial Mode. That page is now offline but the Google cache is still there so you can see what Adobe was suggesting minus the images. 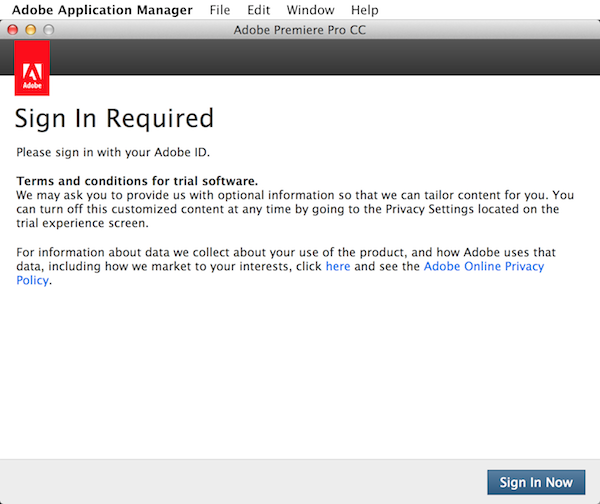 What Adobe needs is some type of fail-safe to allow users to, at the very least, get in and launch their apps for a 24, 48, 72 hour period when something like this happens. If you’ve ever signed up for 2-step verification for any of your online services you might have gotten a secret verification code to use in the event one of your verification methods isn’t available, say if you lose your cell phone. Supplying something similar to Creative Cloud users might ease the fears that were caused by this recent outage. This option has been discussed before and was, of course, discussed again. I can’t image the Creative Cloud ever staying down for an extended period of time as Adobe has bet the farm on this new business model and they want it up and operational more than anyone. But some failsafe would be great for the customer. If their servers are down you might not be able to access your fonts or sync your settings but at least you’d be guaranteed the ability to launch an app and work.

Adobe did offer a statement on the outage not long after it happened. You can read the whole thing but here’s an excerpt:

Several Adobe services were down or unreachable for many of you over the last 24 hours. The failure happened during database maintenance activity and affected services that require users to log in with an Adobe ID.

It would seem those services that require a “log in with an Adobe ID” were vast and included most of them. It’s no doubt that there were a lot of angry folks and extra hand-wringing being voiced via a platform like Twitter. It often seems like that’s half of what Twitter is for: complaining publicly about a company. I have been guilty of this myself. But beyond an airline being late or Comcast doing something not in the interest of their customers an issue like the Adobe outage could really hit people right in their pocketbooks and restrict how they earn a living. I think that’s why I wanted to dissect exactly what happened with this outage, see who suffered from the outage and why others did not.

While it’s no doubt there were a lot of people hit, and hit hard, by the Adobe Creative Cloud outage (if you have a few hours to kill dig into this COW forum!) I think this tweet sums up what most experienced:

@editblog Mildly inconvenienced that I could not send my settings to the cloud. I coped. Somehow.

Thanks to all of those who conversed with me via Twitter about this issue.