Digital beauty treatments and cosmetic fixes in post-production often involve isolating skin with tracking and mattes for color correction and matching, skin smoothing, and blemish removal. Even skin matching across shots isn’t always easy, but there’s some help along the way in basic and advanced tutorials on the wide variety of tools available.

A bit later, the related website Fxphd made their class available to the general public, The Dark Art of Digital Beauty Work (for $69.00). This advanced 5-hour course looks at production-proven approaches for creating seamless digital beauty, with the files to follow the recordings. The class leverages Nuke, and while After Effects still doesn’t have many of the same features, the class might still be useful especially if there’s a trial version of Nuke available to you. One might easily imagine a wag telling the After Effects team to take the series as a big feature request. Here’s an excerpt:

The Secret Art of Cosmetic Fixes is a webinar from Moviola Learning. Here’s Moviola’s rundown of the webinar:

“Actors don’t always look their best on the day of the shoot. From signs of age and acne to signs of a sloppy visit to craft services between takes, one of Hollywood’s best kept secrets is just how much touch-up work takes place after the cameras stop rolling.

In this webinar we’ll take a look at the common techniques employed to create convincing and subtle cosmetic fixes in post. We’ll look at using planar tracking techniques with virtual skin grafts as well as effective color correction processing. We’ll round things out with a look at the near miraculous power of PFTrack to track a head in three dimensions and then apply a fix that remains consistent with the lighting throughout a shot.

Here’s the promo and a related discussion of PF Track and Nuke.

There are similar approaches for After Effects and Imagineer Systems Mocha, detailed in Webinar: Digital Makeup & Retouching with Mocha and Adobe After Effects, in Fantasy Elf Shot from Start to Finish using mocha Pro and After Effects, and in 2015, mocha and After Effects Puppet Tool. The last example captures secondary soft tissue motion with a set of multi-planar tracks, and uses the mesh warping capabilities of After Effect’s puppet tool to place complex animations onto a moving person.

The new Face Tracker in AE should make some of this easier. See intros by Evan Abrams and Chris Meyer on the Face Tracker, as well as Adobe AE CC 2015: Face Tracker and mocha AE: An Overview from Imagineer systems:

Perhaps some enterprising artists will post tutorials on using Mamoworld MaskTracker+ for this sort of retouching.

Mamoworld later added Beauty Retouch in NUKE with SplineWarp+ and Stabilized Views to support MochaImport+ for NUKE. And, after a software update, Imagineer addedOpen Splines and Beauty Work with mocha 4.1.

Awhile back, Andrew Kramer introduced techniques for After Effects in tutorial , where he showed how to remove facial blemishes, spots, discolorations and match grain to cleaned area of face.

How to touch up skin easily in After Effects by Mikey Borup was later added to Cinema Spice.

While not exactly cosmetic, Adding a Filmic Glow can help viewers overlook flaws. As often explained by Chris and Trish Meyer, and referrred to variously as “instant sex, ” ProMist, and Doris, it’s done in After Effects and Premiere with a blurred duplicate comped with a Transfer Mode (like Overlay) at varying opacities over the original.

Vashi Nedomansky had a memorable tip: MIDS are where the skin tones live. He said, “you can really make a face pop by raising the MIDS after you have a good balanced image. Sometimes it feels easy to raise the EXPOSURE in Premiere or After Effects to brighten a face or scene…but that raises all the levels evenly and will ultimately not be as effective as separately adjusting the 3 zones. A good IRE for a properly exposed face is 60-70 IRE…”

You can dig deep on the topic with Alexis Van Hurkman in his book and in Even More On Memory Colors.

In a similar vein, Stu Maschwitz discussed “correct” skin tones in Save Our Skins, and targets changes in Cosmetics: Skin Retouching with Magic Bullet Colorista II and Mask Tracking and Color Grading in CC 2014. A summary can be found in Colorista II Skin Qualification Tutorial, from Covert Film.

In Premiere Pro CS6 Techniques: 53 Color SEVEN: Skin Tones, Andrew Devis does secondary color correction with 2 instances of the Fast Color Corrector. He first showed how to select a small section of your shot to evaluate with the vectorscope. He then goes on to show how to use a second instance of the Fast Color Corrector in conjunction with the vectorscope to for targeted adjustment of skin tones.

When the Median filter, and even Remove Grain in After Effects, is too heavy-handed, there are 3rd-party options to help smooth things over quicker and more subtly.

For example, there’s new version of Digital Anarchy Beauty Box Video, a skin retouching video plug-in (similar to Red Giant Cosmo, RE:Vision SmoothKit, and Digital Film Tools Refine) for NLEs and other apps. Digital Anarchy also lets you make people look worse with a free filter, Ugly Box. Using the same algorithm for selecting skin areas, instead of smoothing the skin texture, Ugly Box enhances it to bring out all the variations, wrinkles and blemishes. And of course, wrinkles and blemishes mean that someone is evil, older, and/or ugly! Here’s an intro to the previous version of Beauty Box, as well as a look at Cosmo in an NLE: 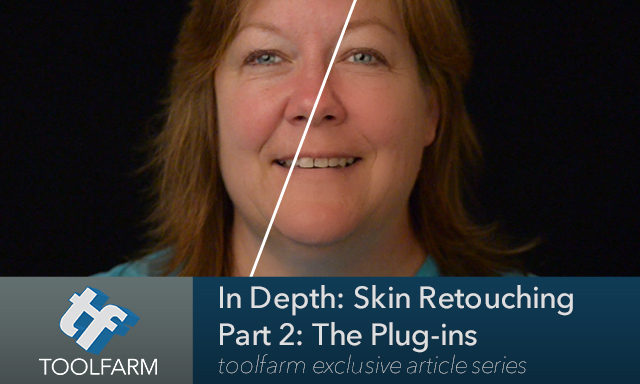 Perhaps it would have been easier to rehash or just copy and paste information on plug-ins from another article, even if this article existed in a raw state for quite awhile. If turnabout really was fair play, we could mine recent and admittedly ambitious 3-part coverage of the topic from plug-in reseller Toolfarm. Instead of rehashing here, you can visit their series–there might be something new about plug-ins. In Depth: Skin Retouching and Digital Makeup, Part 1 looks at a few tools that can isolate skin tones using articulated mattes and keys, color correcting skin tone, and methods of smoothing skin without 3rd-party plug-ins.

There are a ton of beauty-skin cleanup plug-ins for video from 3rd-party vendors (later noted by Toolfarm) but additional resources from the world of Photoshop might be useful for some. Aging but still a good launching pad is 70 Beauty-Retouching Photoshop Tutorials by Dirk Metzmacher on Smashing.

More recently, Eduardo Angel’s How to Color Correct for Skin Tones used a Chan­nel Mixer adjustment in Photoshop, and there’s A Simple Way to Even Out Rough Skin Texture and Pores by Michael Woloszynowicz, and Perfect Skin Tones: How adjust easily skin tones when a portrait contains too much magenta by Calvinhollywood. Also interesting is frequency separation, seen in How to Fix Common Skin and Hair Issues Using Texture Grafting by Michael Woloszynowicz, and The Amazing Power of Frequency Separation Retouching in Photoshop (with Action) from Phlearn.
Peta Pixel has regular news on retouching, so check this link for the latest news and tutorials. Here’s the related video on Photoshop:

Earlier there was 4K movie / Beauty retouch from Foton inc. which made the rounds on photo blogs, and like the work of LolaVFX (Captain America example; Benjamin Button below), seems to have been made in Nuke and/or After Effects (translates automatically with Google Chrome), rather than some new software. Here’s examples from Omote and from Foton. Note also the in-depth technical coverage of Lola’s de-aging VFX in Ant-Man in Ant-Man: Marvel’s heist film at fxguide.

Dove Evolution (2006) and related marketing campaigns got a lot of mileage in raising awareness of ads and Dove. See also “The Dark Side of Retouching” from PetaPixel. Not every company wants to reveal the hard truth; see Watch How Much Digital Alteration a Beauty Ad Really Gets [UPDATED], which you can no longer see after L’Oreal Garnier got skittish. But remember: YOU’RE WORTH IT.
VFX Bro had some fun with enhancing muscle in Get Buff! With After Effects, amid some funny Photoshop fails.
Please note that these roundups are for quick review and comparison. There is almost always vital information from the originating authors at the links provided-and often free presets, projects, or stock footage too.
Support ProVideo Coalition
Shop with