David Levy is an acclaimed art director and concept artist to the videogame and film industry. His credits include Avatar 2, Tron: Legacy, Ender’s Game, Prometheus, and Tomorrowland. He has now debuted his own short film, PLUG, which introduces the concept for a TV series he hopes to get off the ground. Levy not only funded, co-wrote, and directed PLUG, but also taught himself visual effects to finish it. He produced the 15-minute short from start to finish using Adobe Creative Cloud.

David Levy is an acclaimed art director and concept artist to the videogame and film industry. His credits include Avatar 2, Tron: Legacy, Ender’s Game, Prometheus, and Tomorrowland. He has now debuted his own short film, PLUG, which introduces the concept for a TV series he hopes to get off the ground. Levy not only funded, co-wrote, and directed PLUG, but also taught himself visual effects to finish it. He produced the 15-minute short from start to finish using Adobe Creative Cloud.

Adobe: Tell us about PLUG.
Levy: The story is about a woman, Leila Dawn played by Natalie Floyd, who is the last human on Earth. Much like the Tarzan story about a boy raised by apes, the girl was raised by robots. She embarks on a journey to find out what happened, ultimately discovering human life and a new reality of what happened on Earth.

Adobe: What prompted you to create PLUG?
Levy: In my work as a concept designer, I developed new universes, but always for others. I wanted to do it for myself. Over the years, I learned shooting, editing, and directing skills. I knew I could make a film on my own, although a full feature film seemed out of reach. More than anything, I wanted a change.

Adobe: What was your ultimate personal goal?
Levy: I wanted to do something at an affordable budget with great production value to prove my directing abilities. After publishing PLUG online, it turned into a Vimeo staff pick and quickly rocketed to 100,000 views and counting. It was exceptionally rewarding.

Adobe: What was it like working in After Effects CC?
Levy: I was completely new to After Effects, and now I’m a huge fan. What it can do is way beyond what my mind can comprehend. It was pivotal on this project because there are so many effects in the film. 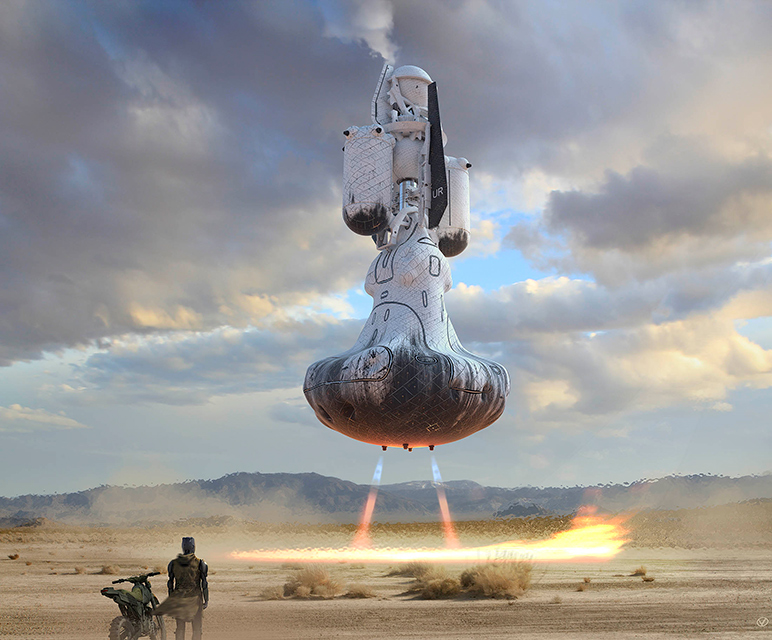 Adobe: What were some of the challenges in making the film?
Levy: I came to the table with an equal blend of experience and complete inexperience. Having worked as a concept artist for years, I knew how to direct the pipeline with images, but I had no experience in visual effects. I did not have a VFX supervisor so I had to learn compositing, tracking, and matte painting on my own. I had no other choice than to finish what I started, although the prospect of doing all the effects myself was daunting.

Adobe: How was the learning curve?
Levy: It was like coming into a new job, which is never easy. Parts of it were a steep onramp, others were relatively pain-free. But I became really proficient with Adobe software. In one year, I was able to go from a newbie to finishing a short film—that’s proof of how easy it is to adopt Creative Cloud. What I found was that Adobe tools have the same language, commands, and visual cues, so for the most part Creative Cloud is easy to pick up. 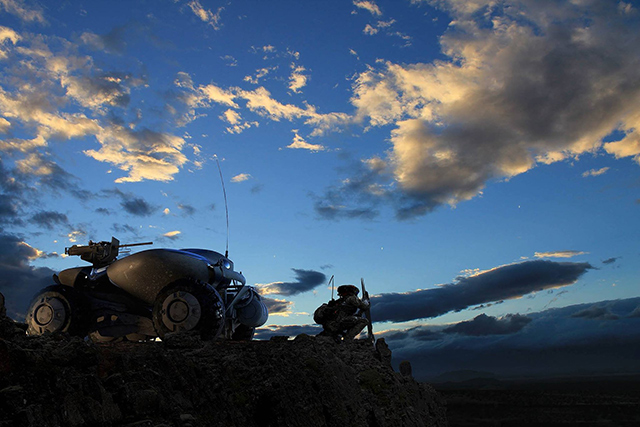 Adobe: How did you handle the tracking with After Effects and mocha?
Levy: I was extremely scared about tracking—it is a completely different world. With tutorials from Adobe and YouTube, I picked up the necessities of 3D and 2D tracking with mocha and After Effects. I used 2D tracking for most of the scenes, turning to 3D only for the most complex scenes. It was relatively painless. The toughest thing I had to go through was the work that could not be compressed, such as rotoscoping. Thank goodness the tools for rotoscoping have made so much progress. I was expecting to lose much more time on tracking, but I ended up spending more time on rotoscoping.

Adobe: How did you finish the project?
Levy: Many people worked on parts of the film using all different types of software. I did not have a lot of money to reconfigure and normalize all the footage, so I was in bad shape. Out of this painful process, I had the epiphany that I needed to use Premiere Pro CC because of its ability to handle footage in any format. Adobe Creative Cloud, especially Premiere Pro, literally saved my project. 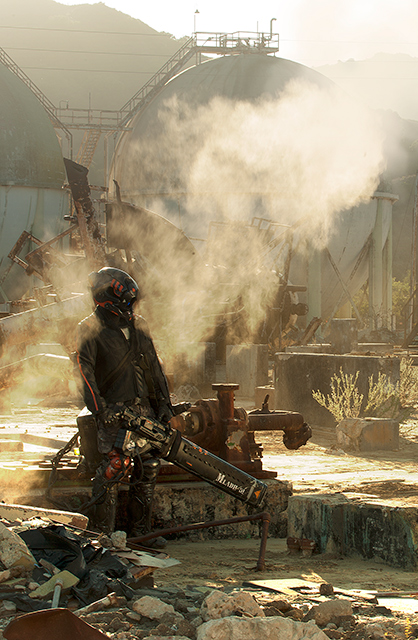 I had help with the basic rough editing, but I finished the project myself. I was extremely happy when I was able to take the EDLs from other software and seamlessly move them to Premiere Pro and finish every shot. I went from thinking I was doomed to being able to edit everything with relative ease. And, once the footage and assets were all on one editing platform, Creative Cloud made it easy to move between editing and VFX, and even to create marketing materials.

Adobe: How did you market the film?
Levy: I used Adobe Bridge and Adobe Photoshop Lightroom at the end of the project to organize still images for marketing materials. I had raw images from shooting and I did a lot of photo editing to make them consistent. In Lightroom, I applied a color recipe to multiple images at once, making minor adjustments later if necessary. I ended up becoming my own small photo studio. I had zero experience with Lightroom prior to this project. I was able to look up tutorials online and jump into it. 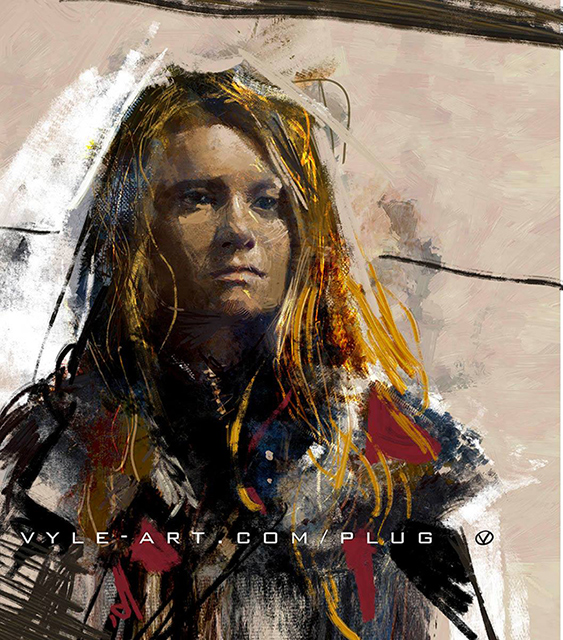 Adobe: Did you work with any other Creative Cloud applications?
Levy: I would have loved to work with SpeedGrade, especially because I come from a painting background, but I was at the end of the project. Having just done all the color correcting of stills in Lightroom, I wanted to do the same thing on the entire film in SpeedGrade, but I honestly couldn’t learn anything any more. That’s where I drew the line.

I also used the audio editing tools in Premiere Pro up front to get the timing right. Much of the footage was shot in the desert and there were 60 mph winds so voices were damaged. We knew we had to re-record later, but during the earlier stages of editing I found it practical to record voiceovers myself.

Adobe: What were some of your takeaways from this project?
Levy: This was the first time I did something so ambitious. I made a lot of mistakes. Some footage was shot at the wrong frame rate so I had to readjust it. What I love about Premiere Pro is that it is so flexible. When it comes to inputting and outputting data, Adobe offers a great tool to correct mistakes made during production—it’s very user friendly.

Adobe: How much time did it take to complete the film?
Levy: I began working on the film three-and-a-half years ago. The visual effects took one year of work by myself and with the help of a few friends.

Adobe: What are you doing with the film next?
Levy: I’m seeking funding so I can keep directing. I want to make myself known in the industry as a director, not just a concept designer. I am hoping there is something around the corner so I can stay on the directing path.