Were you expecting your backups to last more than five years? 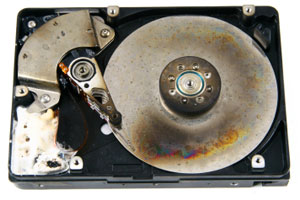 Well-known author David Pogue recently aired this interesting piece on “data rot” for his CBS Sunday Morning tech series, which has been transcribed for the New York Times web site. Aside from containing some interesting geek trivia and a renewed warning that DVD lifespans vary greatly (5 to 100 years, depending on the brand and storage conditions), the line that smacked me in the face was “well, hard disks only last five years, generally.” And that’s not Pogue saying it; that’s Dag Spicer at the Computer History Museum, who is trying to preserve these things.

I know a lot of people have migrated away from tape backups to hard drives stacked in a closet; I know I copied as many of our old Exabytes as I could read onto an external FireWire 400 drive (in addition to using redundant DVDs of more recent material). I’ve always worried about stored drives spinning up again and potential “sticktion” problems; this is the first time I’ve personally heard a time frame put on it by someone of authority. And as we know, FireWire 400 is getting dropped by some computers as well. It sounds like backing up data is no longer a save-and-forget-it exercise (not that it ever was), but instead a shell game we need to be playing constantly in order to keep backups up-to-date.

Regardless of media used, as we noted earlier still make two copies – just to be extra safe.