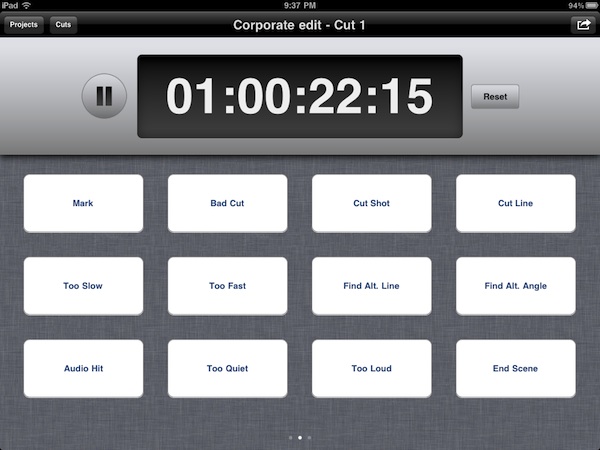 There’s a new iPad app that has just been released into the iTunes app store called Cut Notes (iTunes link). It comes from the folks at Digital Rebellion, makers of any number of handy tools that most all Final Cut Pro users are familiar with. Cut Notes is different in that it turns the iPad into a note taking device that can record comments about an edit and then send those comments over in any number of ways.

I’ve been playing with an early build of Cut Notes for a little while and it’s been a handy tool. It was created with the help of editor Nate Orloff who saw the need for such a tool firsthand. I’ve handed it to a producer or two and they’ve used it to take notes and then email me the results. It’s simple in operation. Setup a project and then hold the iPad in landscape mode. You’ll get an interface that looks like this:

Hit the play button when the editor, or whoever, hits play on the edit system (or DVD or Quicktime, anything for playback) and then as you watch along, tap any of the big buttons to make that specific note as playback happens. When you tap a button you see a message flash on-screen that the note was saved: 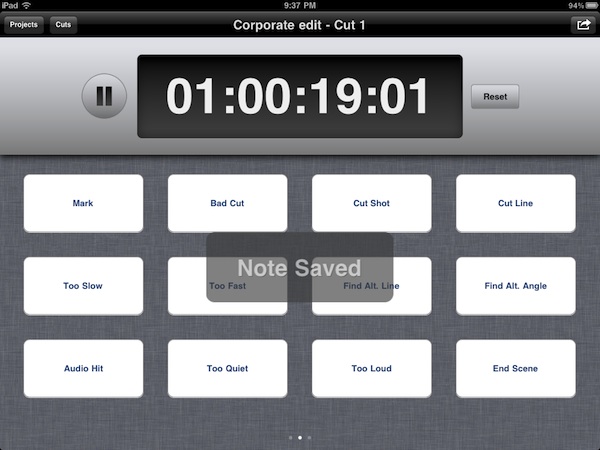 There’s more than just the one page of notes. Swipe left to type a custom note, swipe right for another page. The buttons can be edited by tap and holding. A change interface will then pop up to customize the buttons. When you’re done just rotate the iPad back to portrait orientation and then you can view and delete the notes: 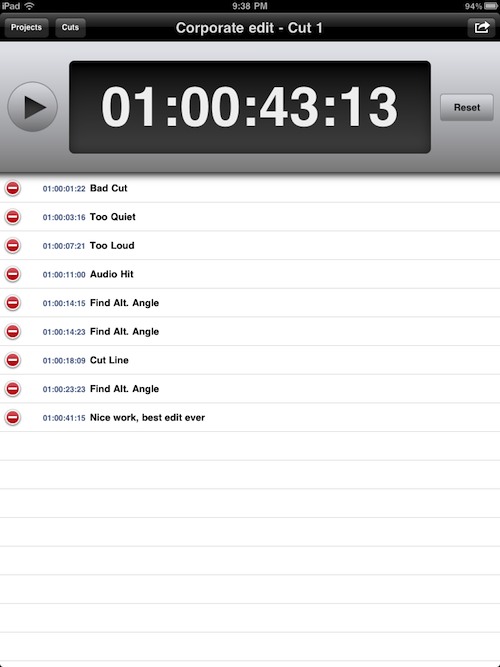 Once finished, export the notes in any number of formats: 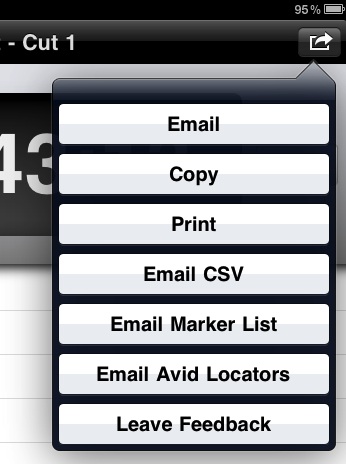 For Final Cut Pro integration you have to download a free Cut Note Marker Import utility from the Cut Notes website. For Avid Media Composer integration you just import the list via the Import Locator command in the Locators window:

The Cut Notes website says “timecode-accurate notes” but that may not be entirely accurate as the iPad isn’t getting any timecode fed to it. It’s dependent on a manual start from both the Cut Notes app and the playback. More than likely the frames won’t be accurate. It would be really nice if Cut Notes could actually start and stop playback of an edit timeline via a wifi connection. This is something that Keymote can do as a Final Cut Pro remote. The one using Cut Notes may find they missed a note if there’s several notes that need to be made close together. This is the first release and I bet that Digital Rebellion has some good updates planned for its future.

Cut Notes is $7.99 and available in the iTunes store (iTunes link). There’s more information about Cut Notes at the official website including a pdf manual if you want to get more details on how it operations.

Or check out this video:

Cut Notes: Timecode-Accurate Notes on an iPad from Nate Orloff on Vimeo.