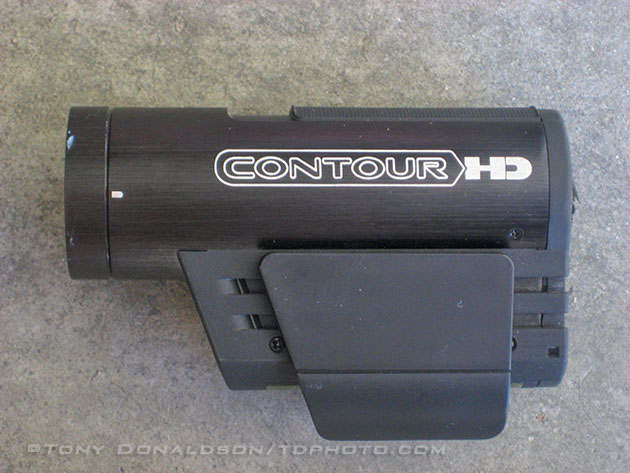 As a photographer, motion photography interests and fascinates me as a medium as much as still photography. Small, easily mounted cameras make camera-mounted images so much easier.

I’ve worked with V.I.O.’s POV cameras for a couple of Car and Driver videos, and I’d recently used a GoPro Hero Wide camera for some bicycle-mount shots. I’d been interested in the VholdR camera. Before I even had a chance to try that camera, VholdR became the first company to market with a helmet cam that was in HD. At least, in 720p.


They sent me one for the review, it took a while as they had stock shortages. The camera is really small and light, and once you buy one accessory, you can mount the thing ANYWHERE.


Unboxing the thing is a task, they’ve spent a lot of money on the packaging. It’s so nice I wonder a little how much it costs? 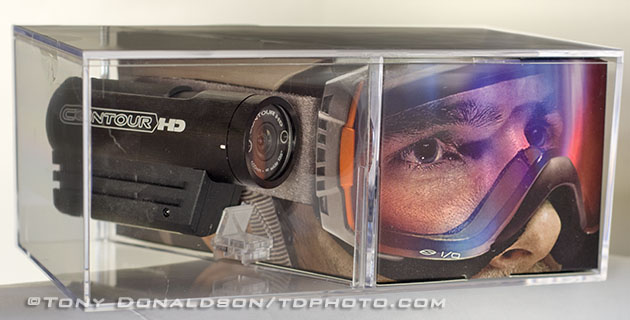 The camera comes with two mounts, one for smooth surfaces, using an adhesive pad, and one goggle strap. The goggle strap is a great idea, but my goggles have a thin strap, so the unit bounced a lot. Putting a little velcro between the mount and helmet made a huge difference. Either system uses their proprietary rail mount system, something that allows for a fair amount of wobble, especially on anything with a lot of vibration. There’s no built-in image stabilization, so this can be a problem pretty fast.


There’s also a little play in the rotating front element, so taping that down can help with both handling noise and wobble reduction. I found that using a little gaffer’s tape to secure it and make a minor lens hood helps a lot, especially in dirty environments. A little dust on the front can create a lot of flare.


The best solution for the less-than-solid proprietary mount system is to spend twenty bucks on their “universal mount adapter” (part #3100). It allows you to use both sides of the rail system to mount a piece with a 1/4″x20 screw, the industry standard for tripods and a lot of grip gear. Using this with a Manfrotto ball head I was able to mount the thing to cars and bikes using mafer clamps, suction cups and even magnetic mounting hardware with ease.


The camera, once on, records when you slide a big button on the top. It’s solid, couldn’t be easier to operate in almost any conditions. Switch it on, it starts recording. Switch it off, it writes the file to the card. I had one instance where that didn’t work, the first time I taped the unit to the bottom of a friend’s skateboard. He decided to try a 5-0 grind on the back truck, hitting the camera hard and scraping the front edge. It was a hard enough hit that it confused the camera and locked it up. I turned it off, lost that file, and had to try again later. Seems OK now, and that points out the ruggedness of this camera. It was dazed and confused, perhaps a slight concussion (kidding), but still runs ok. 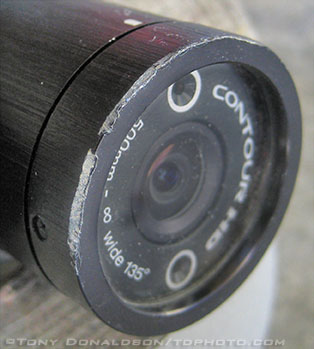 It has no monitor to view the image, so you have to guess what’s in and what’s out. There’s no facility for outputting the video via the mini-USB, so your only option is to shoot something, then download the card (can be done with the camera still in place) and check. The camera has a cool feature, dual lasers that can show what the camera is pointed directly at, allowing you to make sure it’s level. If it isn’t, the entire front element and sensor rotate up to 90 degrees in either direction to allow you to fine-tune the shot. Those lasers do not show the field of view, which is quite wide. 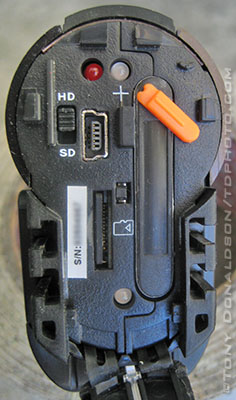 
At 720p, the ContourHD is 16×9 aspect ratio and 30fps and can shoot around 4 hours on an 8GB micro-SD card. In all my tests, I didn’t fill up the card. Downloading with the USB cable attached to the camera also charges the battery. I never found myself wishing I had a spare, even on long mountain bike rides. In the wide SD mode it’s a little less wide, the sides are cropped a little, and a fast 60 fps for about double the time on the same card. I found myself almost always using the 720p mode.


The audio beeps to let you know when it’s turning on or off, or recording or stopping, are very clear and make operation easy. Even on a helmet, I don’t need help to aim it or hit record or stop it, even with gloves. You can’t feel the 4.3 ounce weight, it is quite light.


The attached video was brought into Final Cut Pro in the Apple Intermediate Codec without changing size. It was then cut and output using H.264 to make it easier to deliver here. I haven’t touched the audio levels or added any music so you can hear the audio quality.

You can see a little of the “jello effect” of the rolling shutter in several of the shots. It’s not bad, but something to be aware of. The rattling is either the universal mount or the lens rattling.


I had a blast mounting the thing anywhere I could think of. It’s a very versatile camera. I wish there was a way to view the shot, and to lock the exposure. The exposure can be a real pain, if there’s a lot of bright sky late in the day, you’re stuck with silhouettes. I love the simplicity of the camera.


The images are a bit soft, but that’s probably due to the high compression used in the video. For the money, the size and the versatility, this is one truly fun and amazing little camera. I’m still enjoying seeing where I can get away with mounting it. It’s so small and light I take it with me everywhere. Can’t wait to use it on a job!