Over the years I’ve collected a number of inexpensive LED panel lights, and they all use a two-conductor coax (coaxial) plug. The lights or their power supplies are all well documented as to voltage, current, and polarity, but none of them list the dimensions of that coax plug. Even the customer support folks at the manufacturers I’ve contacted haven’t been able to say. 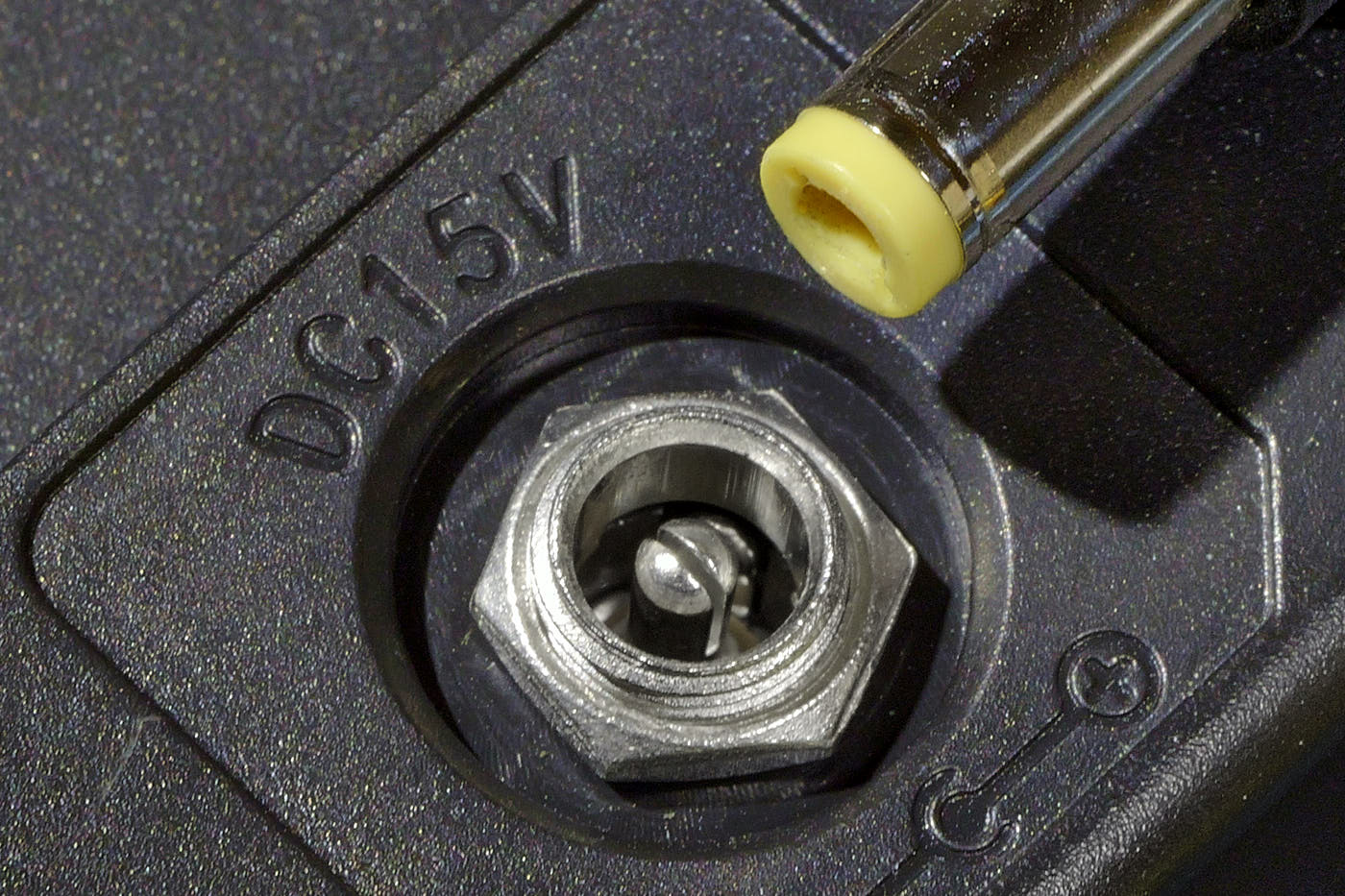 Why does this matter?

You might want to replace a failed power supply with one off of Amazon, AliExpress, Mouser, or the like.

You might want to get a DC extension cable: many of the power bricks these lights come with have DC cords between three and five feet in length. With a light stand-mounted at six or seven feet, that leaves the brick dangling uncomfortably several feet off the ground, putting stress on the plug and tugging on the light (at these price points, bricks are not equipped with hangers).

How can you tell?

Coax plugs with 5.5mm outside diameters are very common; it’s that inside diameter that’s tricky: it can be 2.1mm or 2.5mm. Andrew J at element14 says that 5.5mm x 2.1mm jacks are common at 12 volts, but that at higher voltages 2.5mm is more often found. That’s not universal, though; I’ve seen 48 volt eBike batteries with 5.5×2.1mm charge ports.

Robert Fay at DigiKey has a few handy tips, among them:

Both of those are highly dependent on having “standard” toothpicks and pens. Half the pens I have slide all the way into 2.1mm plugs, so if you go this route, test with a bunch of different pens.

Also consider wire gauge when you get extensions: too small a wire causes excess resistance. The results may include voltage drops leading to color temperature changes or panel malfunctions; and overheating leading to burns, melting, and fires.

Look at the DC cable on your power brick, and look for its AWG (American Wire Gauge) number. My 15V, 3A supplies for the panel lights use 20AWG cable; 18AWG is used on a 12V, 4A supply with a 9 foot cable; the 15V, 6A Nanlite supply uses 4.5 feet of 16AWG cable. Note that the smaller the AWG number, the larger the wire is — and the diameter of the insulation jacket is not a good guide to conductor size.

Any extension cable you use must be the same gauge or larger (a smaller AWG number), and/or it should be rated for the same amps as, or more than, your light requires. When in doubt, go for a bigger cable: its resistance is added to that of the existing cable, so the beefier, the better.

If you search on Amazon, you’ll find that 5.5mm x 2.1mm extensions are as common as it gets, but 5.5mm x 2.5mm extensions with beefy cabling are about as common as hen’s teeth. I did manage to find two useful ones: a two-pack of 1-meter, 18AWG cables from BNKENX (also sold by BEKER: I ordered these but got BNKENX-branded ones, complete with the velcro ties) and a 16AWG six-footer from BiXPower.

I’ve been using both of these for a while on my panel lights with good results: no failures, no fires, no color shifts, and my power bricks can lie comfortably on the floor and not put stress on their cables.

Be advised: adding a DC extension is not something the manufacturers support. If you do this, monitor the temperature of the cable and its connections with your light at full brightness (maximum current draw). If the cable or its plugs get warm — warmer than the power brick’s own cable plugged directly into the light — stop using that cable immediately. But if it stays cool, you should be OK.

Nonetheless I should emphasize that you extend your light’s cables at your own risk, and neither I nor PVC nor anyone else in the vast FilmTools empire is liable for any actions you take that may result in property damage or personal injury. Just be careful.

Disclaimer: all the products I link to I’ve bought myself at market rates. No one has supplied anything for review or offered any compensation for a favorable mention. And yes, I have a cheap-lights problem (curse you, B&H and your year-end sales), which I’m coming to grips with — by buying less-cheap lights! So, problem solved, eh?