To create a movie or still image from your animations and arrangements, you have to render a file. After Effects is very flexible in allowing you to set up and override certain parameters when you render, as well as to create multiple files with different aspect ratios and file formats from the same render pass. You can also create and save templates of these render and output settings. In Chapter 42 of CMG5 we reveal the internal render procedure as well as discuss each option in the Render Settings and Output Module dialogs; we’ll share a few of those gems here.

Internally, After Effects treats rendering a movie as a two-step process. These two steps are presented to the user as two different sets of options for each comp in the Render Queue: Render Settings and Output Modules. The Render Settings determine the resolution and frame rate, and whether the image is field rendered, and then an RGB+Alpha image is stored in RAM. The Output Module determines how this uncompressed image is saved to disk.

One of the best features in After Effects is that a single render can have multiple Output Modules. Every render must have at least one, and it gets one as a default when queued. To add more, select the comp in the Render Queue, then select Composition > Add Output Module, or click on the + symbol in the last Output Module for the current Render Queue item:

In these cases, you have to render (which is your big time killer) only once, but multiple output modules can take the render and save it in as many formats as you need. In the example above, we’re saving a render both as an h.264 file for web and mobile media consumption, plus as an uncompressed master that we can archive and recompress later to any future format that may be required.

Proxies versus The Real Thing

Proxies are prerendered stand-ins for footage files or entire compositions. They are usually created either to save time (by prerendering an otherwise time-consuming composition that will need to be rendered time and time again), or as lower-resolution placeholders for footage items to make the program more responsive while you’re animating.

In the Render Settings, you get to choose whether or not to use proxies while rendering. The setting Comp Proxies Only will use proxies applied to comps but not to footage. If you are using proxies strictly as placeholders, you can choose Use No Proxies; if you’re using them as prerenders, Current Settings will reproduce exactly what you’re seeing inside your compositions, obeying the proxy on/off switch settings in the Project panel.

(Proxies and prerendering are explained in detail in Chapter 44; we’ll share gems from that chapter in a couple of weeks.)

This Render Settings popup allows you to override the project’s color depth setting at the time you render. This is handy for two reasons: You cannot otherwise set color depth on a per-comp basis, and it is often more efficient to work at a lower bit depth (such as 8 bits per channel) in the name of speed and then render at a higher bit depth (such as 16 bits per channel) while you eat or sleep.

However, don’t just blindly change this setting and hope for the best; changing the color depth can change the appearance of your images, especially when floating point (32 bits) mode is involved. Change it first using File > Project Settings and make sure you see what you expect. (Color Depth was explained in more detail in CMG5 Chapter 26.)

Some output formats and codecs (such as DV, HDV, MPEG2-DVD, et cetera) have restrictions as to what frame sizes and/or frame rates they will accept – for example, a DV frame is always either 720×480 or 720×576 pixels.

If you try to render a composition with incorrect specifications to one of these “constrained” formats without first resolving the differences yourself, After Effects will automatically scale the output and/or conform the frame rate as needed. If the comp’s settings do not match the requirements of a constrained format you choose in the Output Module, a small, very easy to miss warning icon with the text “Settings mismatch” will appear in the lower left corner of the Output Module. Click on this icon or hover your cursor over it to see a summary of what After Effects is going to do to resolve the issue:

Note that you will not see this warning in the Render Queue panel. This is an issue if you choose an Output Module template that would create a mismatch and don’t open the Output Module to double-check its settings.

Sometimes, this automatic resolution is handy: For example, square pixel widescreen comps will automatically be scaled horizontally to fit the needs of anamorphic widescreen codecs such as DV, HDV, and DVCPRO HD. Other times, this behavior is deadly: For example, a render that was set to field render in the Render Settings may be scaled vertically (a very big no-no) to fit the needs of a given codec. So keep an eye out for the Settings Mismatch icon in the Output Module, and try to resolve any mismatches yourself.

The Color of Alpha

The deceptively named “Color” popup in the Output Module dialog does not have color choices. Instead, it determines how the RGB channels should be rendered if there are also transparent areas in the alpha channel. The alpha type choices are Straight (in which the color information extends, full strength, past the edges of the alpha) or Premultiplied (in which the color information extends only as far as the alpha). 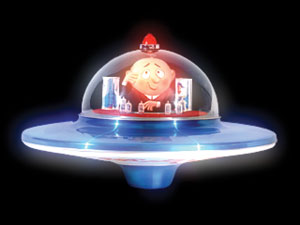 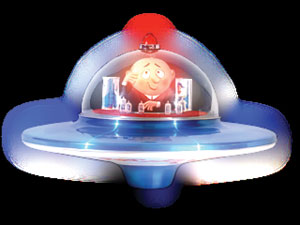 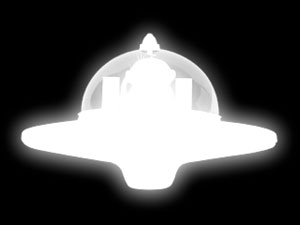 The Channels/Depth/Color menus control which channels are saved and whether the alpha is matted or unmatted. We applied Effect > Stylize > Glow effect to the spaceman image, and rendered using the following variations: RGB with alpha premultiplied (above left), RGB with straight alpha (above right), and alpha channel (left).
Spaceman courtesy Classic PIO/Nostalgic Memorabilia.

If you select Channel > RGB+Alpha, you will normally want the Color menu set to Straight (Unmatted) so that the background color is not premultiplied into the image. If you are rendering Channels > RGB only, be sure to set the Color menu to Premultiplied to composite the color channels over the comp’s background color. Be warned that if you change the Format or Format Options, After Effects resets the Color popup to Premultiplied: annoying at best, as most applications prefer Straight alpha channels.

Also be warned that the “Lossless with Alpha” template that After Effects provides renders a premultipled with black image; be sure to duplicate this template and make a variation with the Straight option. Use this “Lossless with Alpha Straight” template whenever you are rendering an alpha channel for compositing in an external editing system.